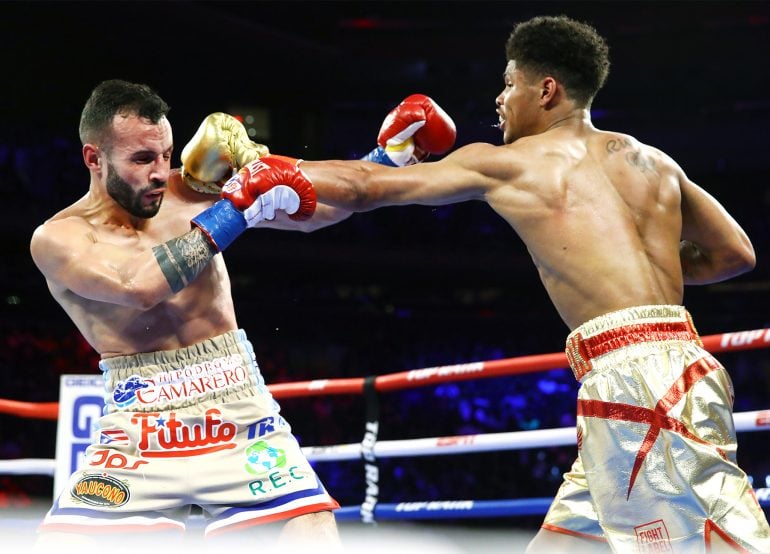 NEW YORK – In the second PPV bout at Madison Square, Shakur Stevenson, who’s been making noise about wanting a title shot sooner rather than later, outboxed Christopher Diaz to a unanimous decision win.

Stevenson, from Newark, NJ, impressed at the the 2016 Games and has made long strides in the last year. We heard that his desire to leap, not edge up the ladder, made some at Top Rank nervous.

They do like to be deliberate, but the kid was not wanting to be that, banging the drum for a title opp. Funny thing though, he was deliberate on this night, as he mostly stayed smart and focused and didn’t take many risks. He looked like he just wanted that W, rather than getting the W and looking to steal the show. After ten, the judges gave Stevenson the love, via 100-90, 99-91, 98-92.

The win will perhaps give him more ammo, for that sooner rather than later title crack, because he deftly handled a seasoned vet. The part of me that wants entertainment, and some drama, hoped that both men would open up more, take risks. The crowd I think agreed; there were boos raining down in round ten, and to close the last round.

“Listen, I want all the champions at 126 pounds. Josh Warrington is someone I want to fight. I am ready. I take nothing away from Christopher Diaz. He’s a great fighter, but I came in there to outbox him, and that’s exactly what I did,” he said. 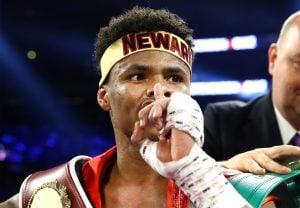 In the first, the lefty Stevenson moved to his right, then left, looking light on his feet. His hand speed showed in the jab, not a stabber, but quick and good to break the rhythm of a foe. His long left lead landed on Diaz, who looked a step behind. The NJ boxer used his legs to good effect, having Diaz trying to track him down, but without great luck.

In the second, we saw Stevenson not moving as much, with Diaz trying to ramp it up. His left to the body thudded. He pressed more, tried to undermine Shakur, unnerve him just a bit. The distance tightened, and Shakur was OK with that. He was now stepping up the combos.

In the third, Stevenson edged even closer. He slammed high, then low, then peppered with a jab, waiting for a sweet opening. You saw him upping the ante, a bit more each round.

In the fourth, Stevenson was not getting impatient, he was in a similar mode to the previous round. Diaz was in his face, also not getting sloppy or taking much in the way of risks.

In the fifth, I confess I thought I’d see Stevenson go into another gear…but he was content with this pace. Was he waiting for Diaz to tire? Late in the round, we saw him uptick in energy. To round six…Stevenson stood in the pocket, and ripped shots, Then he’d shove Diaz back, tell him he was the stronger man. He flurried, pot-shotted, grinned…total control, really.

In the 7th, Stevenson let Diaz take a run at him. Was he wanting to catch him in a trap? In round 8, Shakur saw everything coming at him, his vision was spot on. Diaz tried a few forays but wasn’t taking risks. Was this because he’d been down in his second to last fight, a loss (UD12) to Masayuki Ito, when the WBO super feather title was up for grabs? By now, I wondered, was the cut from 130 to 126 not feeling good to the Puerto Rican? Was he conserving energy for that reason? In round nine, we heard a few boos…Would Shakur seek to give the masses their pound of flesh in round ten? In the tenth, we saw Stevenson hamming it up. Both men were mostly loathe to take risks…We went to the cards.

Stevenson has had quite the ride so far. A silver at the ’16 Games, chose Top Rank over other suitors, in splashy fashion, had a misstep with a summer 2018 fracas, which saw him arrested, and gained more buzz when a video of the scrap, out of the ring, leaked to social media last month. Miami Beach will not hold kind memories for the Jersey-ite. But his people say he’s on the straight and narrow, and devoting himself to the fight game, and not allowing himself to veer off track.