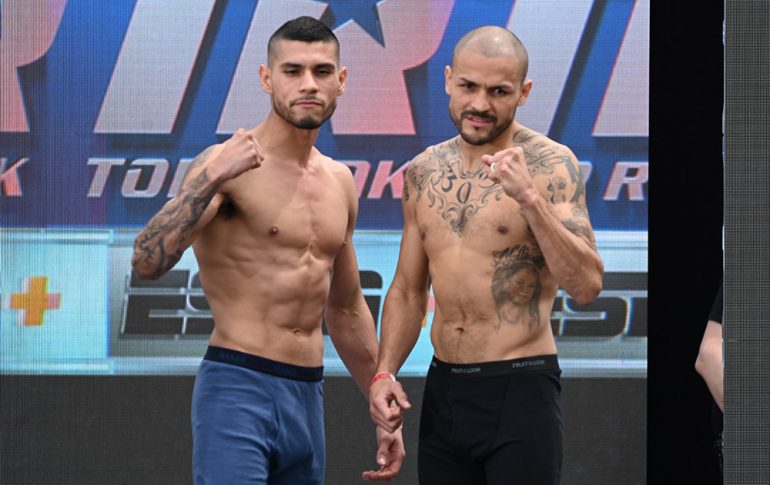 After solid victories over modest opposition, Barboza is on the cusp of becoming a legit contender at 140 pounds.

Enter Mike Alvarado, who was once in Barboza’s shoes several years ago, carving out a career that may be in its final days. Alvarado would like one more crack at a world title belt before the 38-year-old hangs up the gloves for good.

Barboza will face Alvarado Friday night at Staples Center in Los Angeles. The 10-round bout will be part of the Lomachenko-Crolla undercard that will stream live on ESPN+, beginning at 8 p.m. ET/ 5 p.m. PT.

The 27-year-old Barboza (20-0, 7 knockouts), who resides in Los Angeles, notched a one-sided victory in his last bout on Dec. 14, defeating Manuel Damairias Lopez by decision. Up until Friday night, Barboza’s most impressive performance was a 10-round decision victory over contender Mike Reed on Mar. 10 of last year.

Alvarado (40-4, 28 KOs) stopped journeyman Robbie Cannon in his last bout on Oct. 13. The Denver resident has won his last six bouts since losing to Brandon Rios in January of 2015.

A win over Alvarado could open more opportunities for Barboza, including a possible fight against WBC junior welterweight titleholder Jose Ramirez later this summer. Barboza is ranked No. 4 by the WBO.

A possible fight against Ramirez, or any other top junior welterweight, is contingent to Barboza’s performance Friday night.

“If Barboza is to get to the next level, he has to defeat Mike Alvarado and look impressive doing it,” Top Rank Vice President Carl Moretti told The Ring. “And that’s really what it’s all about. If, one, can he defeat Alvarado, and, two, how good can he look doing it?”

Barboza has fought several times on Top Rank cards in Southern California, where he has become a decent draw. He has a boxer-puncher style that is fan and TV-friendly, which is high on the Top Rank checklist of fighters they promote.

Will Barboza become the next Top Rank fighter to fulfill their expectations? That depends on what statement he makes in the Alvarado fight.

“(Barboza) is in a great weight class. 140 pounds. He has a good following. And he makes good fights. That’s usually enough,” said Moretti.