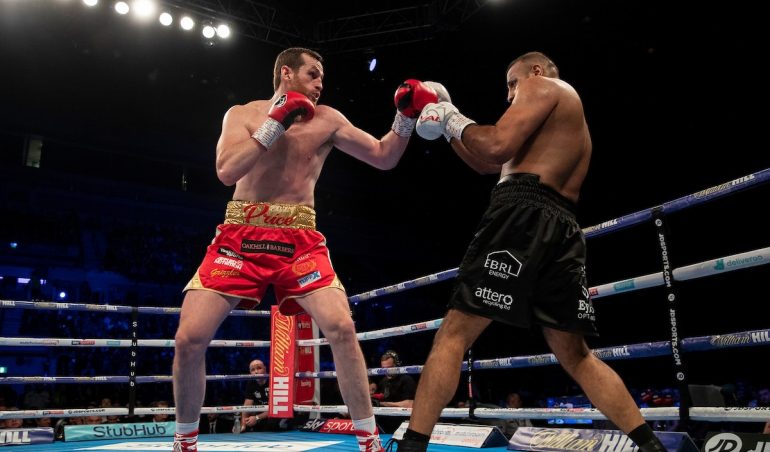 If you can’t handle the heat, then get out of the kitchen.

Former British and Commonwealth heavyweight champion David Price survived the dirty tactics of previously unbeaten prospect Kash Ali to prevail via disqualification at the Echo Arena in Liverpool, England, on Saturday. The official time was 2:26 of Round 5 in a bout that was scheduled for 10.

When he began to absorb punishment in the third round, Ali incredibly sank his teeth into the left shoulder area of Price who immediately informed referee Mark Lyson of the despicable infringement. Moments later, Ali was deducted a point for use of the head, then he was warned for rabbit punching.

In the fifth, Ali enjoyed his first moments of real success when he landed with an uppercut followed by an overhand right, but Price responded well, rocking Ali with a big straight right hand of his own.

And then it happened.

Ali wrestled Price to the canvas and bit him on the left side of his rib cage. A purple welt was immediately visible on the Liverpool man’s torso and Lyson had seen enough.

“He lost his head and it’s a disappointing way to win,” said Price (24-6, 19 knockouts) in an interview with Sky Sports in the U.K.

“I hurt him to the body before the final bite. He did a couple early on. I’m not pleased with my performance, but the job’s done either way. I don’t want to share the ring with an animal like that again.”

Ali (15-1, 7 KOs) can expect a fine and a suspension. There is no room in boxing for that type of conduct and he’d be well advised to get out of Liverpool in a hurry.