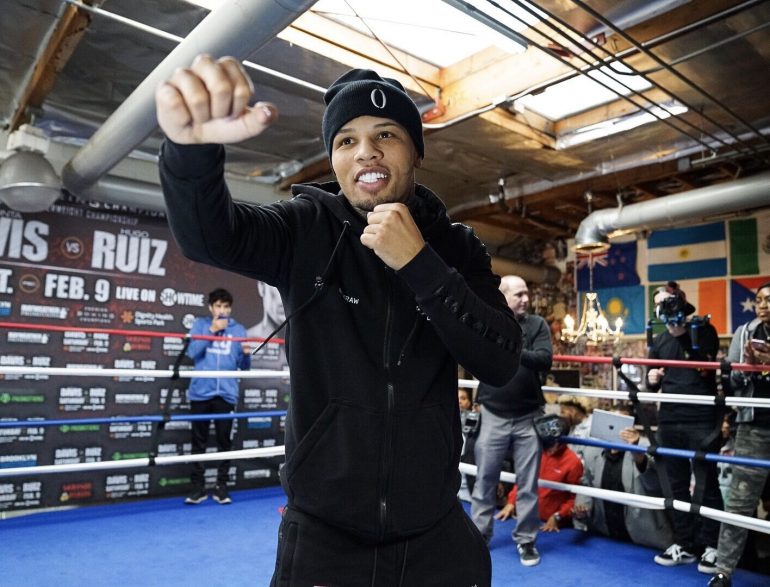 LOS ANGELES — Accountability is one of the surest signs of maturity.

The ability to truly own up to one’s shortcomings is revealing. For Gervonta Davis, the admission — without prodding — that changes were necessary proves that at 24 years old, he’s slowly growing into his own.

The fighter nicknamed “Tank” for his power, strength and proclivity for non-stop pressure realizes he’s on the cusp of something far greater than what he’s already achieved in a short period: stardom. With Floyd Mayweather Jr. behind him, Davis envisions a spot on the marquee for his own pay-per-view shows in the near future.

For it all to come to fruition — and for Gervonta to truly realize his potential — he needs consistency both in and out of the ring, a quality that’s incredibly difficult to hang on to.

Davis (20-0, 19 knockouts) was limited to only one fight in 2018, an April knockout victory over former titleholder Jesus Cuellar. Tank was arrested in September following an altercation outside a Washington, D.C. nightclub. He noticeably ballooned in weight.

The Baltimore native was lined up for the most high-profile fight of his nascent career, a showdown Saturday against former three-division titleholder Abner Mares; that fight was scrapped after Mares suffered a detached retina during sparring.

Davis instead will defend his junior lightweight title against Hugo Ruiz on Saturday in Carson, California, on “Showtime Championship Boxing.” It’s Davis’ first televised headline appearance in the United States.

“Now that I get it I know that I can be a big star,” Davis says. “So basically just staying in the gym, staying out of trouble, for sure, and just listening to my corner and the people’s that behind me. … If I stay focused, I’m aiming for pay-per-view by 2020. I gotta do a lot of hard work.”

The Ring’s top 130-pound fighter acknowledged that he “gained a lot of weight” and was even “heavy,” a body shift he attributes to becoming a first-time father (a daughter) which kept him around the house eating often. Back in tip-top shape — though he’s battling a cold during fight week for the second consecutive outing — Davis is eager to deliver another sensational performance.

He’s mostly excited about competing so early in the year which will give him the opportunity to fight three times in 2019. The squabbles with Mayweather and Leonard Ellerbe are behind him, he says, along with all the frustration that led him to lash out on social media. Now, he’s focused on “staying out of trouble” and perfecting his career.

It’s easier said than done. Davis hails from one of the most crime-ridden areas in the U.S., the Pennsylvania Ave. area of Baltimore. His longtime trainer, Calvin Ford, was the inspiration for the character “Cutty” on the Emmy-award winning HBO drama “The Wire.”

“I see (growth) every day. That’s what’s going to mold him, the things that he go through because a lot of things came quick,” Ford said. “We didn’t expect it to happen this quick. All I can do is just whisper in his ear and (he’ll) learn from it. All he’s gotta do is cross that line and be who he want to be.”

The southpaw calls Ford a hero. When Davis was growing up, it was Ford who would often shell out money to ensure the fighter made it to amatuer tournaments. Ford was a mentor to a bundle of young kids in Charm City where danger and the temptation of gangs lurked at every corner.

“The people that I was coming up with in the gym, most of them are dead or locked up and things like that … so I made the right choice to stay in the gym,” says Davis, who admits he’s cut certain people out of his life who didn’t always have his best interests.

” … I always had people around me that had their own stuff going on but I think I’m a strong guy that knows right from wrong and knows where I’m headed to.”

Unfortunately for Davis, he’s not headed toward a fight with Mares where a victory would have vaulted him to another level. Even at 33, the Mexico native is a top-shelf fighter who possessed the skills to trouble Davis. Mares was moving up in weight in search of a title in a fourth weight class before he was derailed by the eye injury.

It was originally announced as an elbow injury, and Davis expressed skepticism at the legitimacy of the ailment. When it was later revealed to be a detached retina, Davis reached out to Mares with a direct message over social media wishing him a speedy recovery.

Davis’ opportunity to shine on the marquee stage is vanquished, but he can still regain some career momentum with another knockout; he’s prevailed via decision only once, and that came in his ninth pro fight.

“You have to experience those things in life, learn from it, and the most important thing where I’m so proud of him about: he accepted responsibility for the actions that he took and what caused all that and he put it behind him,” said Ellerbe. ” … I’m very confident he’ll be unified champion by the end of 2019. …

“He’s going to fight at least three times this year, we’re getting started earlier. … We know that he should have been fighting more. It doesn’t take rocket science to figure this out. It’s frustrating on my part, Floyd’s part, Al (Haymon’s) part, his part. … We’re coming in 2019, trust me.”

The fight against Ruiz isn’t likely to prove much about Davis’ future, but the growth is obvious in the way he conducts himself. The mild-mannered fighter is more relaxed than ever before; more cordial. It’s clear that he sees what lies ahead and right now, he’s honed in on the prize at stake.

His Instagram account boasts over 1.1 million followers, a legion of fans Mayweather is sure will translate to commercial success that reaches beyond boxing.

“I could remember 23 years ago when I was in that same position,” the future hall of famer said. “When you’re in this position you have to take advantage of it. Opportunities like this come once in a lifetime. You must go out there and give it your all.”

Davis appears ready to do just that. He’s owned up to his past problems. Now he needs activity and consistency.