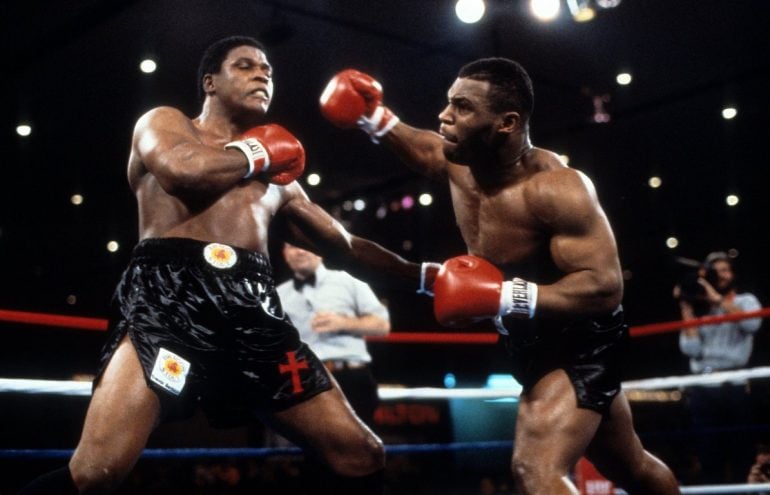 Tyson (right) on the way to becoming the youngest heavyweight titleholder in boxing history. Photo from The Ring archive
18
Jan
by Michael Woods

His legend stands such that he is still the best-known living boxer on the planet, even though his last fight occurred in 2005. And Mike Tyson’s post-in-ring chapters of his life are proving to be surprisingly compelling and rewarding as well; the 52-year-old Brooklyn native visited the Everlast “Talkbox” podcast on Thursday and shared how he’s spending his time these days.

First things first; Tyson is now part of the lava-hot podcast scene. His show is called “Hotboxin’ with Mike Tyson” and the focus is Tyson exploring alternative treatments for addiction and mental health.

How is this for participatory journalism? Tyson’s inaugural guest Dr. Gerardo Sandoval has a foundation to raise awareness about the medicinal benefits of the Incilius Bufo Alvarius, otherwise known as the Sonoran Desert Toad – an endangered species of toad whose venom contains the organic presence of the chemical 5-MeO-DMT.

Tyson on-air swallows the psychedelic 5-MeO-DMT aka the “toad venom,” so we can get a sense if he gets KO’d by the stuff or not. “The toad is a totally interesting aspect of my whole being now,” he stated. “It takes you to a place that takes you to another dimension. Ever since I did it I’ve had a miraculous change about me. It’s been a few months ago (since I first took the venom).”

He will, in future episodes, he told us, share his newfound status as a cannabis entrepreneur as well.

Yes, the guy is staying busy. In case anyone out there is wondering if he gets the itch to compete, to fight again, I asked him if he might return to the ring. “Never, never, ever, ever, ever,” he told listeners. So that book is closed and it is clear: He is actively seeking out experiences which keep him entertained. The cannabis angle said he smoked pot when he was young but he didn’t know the positive aspects of the magical herb. He swears by the stuff and said that marijuana is, for him, a potent analgesic, which helps him deal with the aches and pains that came from boxing for over 20 years. “The cannabis has been a game-changer for me.”

More Tyson news: He talked up his Tyson Ranch, a property in Desert Hot Springs, California, which just so happens to total 420 acres. An entertainment complex, a luxury “glamping” resort and cannabis research and design facility will be his creation and under his direction. On February 23, the resort will be the site for a one-day pop-up event and notables like Miguel, Chicano Batman, Starcrawler, Yonee and All MY Friends Hate Me are supposed to be on the roster. An interesting angle: A portion of all proceeds from the Kind Music Festival will be donated to the 501(c)(3) non-profit organization Standing United and promotional material for the event states it will “aid those struggling with drug addiction and homelessness, a cause that KMF holds dear as several employees, including a number of executives, are in recovery.” He also touched on there being a “Tyson University for Cannabis,” which I have to learn more about. Could I become a professor at the U…and could I be a prof if I don’t puff? I will look more into that…

The ex-fighter, an entrant in 2011 to the International Boxing Hall of Fame in Canastota will present the award for best sports pod at the iHeartRadio Podcast Awards…and he’s touting a topical cream called “CopperGel,” which he swears by. I asked him, tongue-half-in-cheek, would it burn my privates if I had the gel on my hand and accidentally grazed myself? 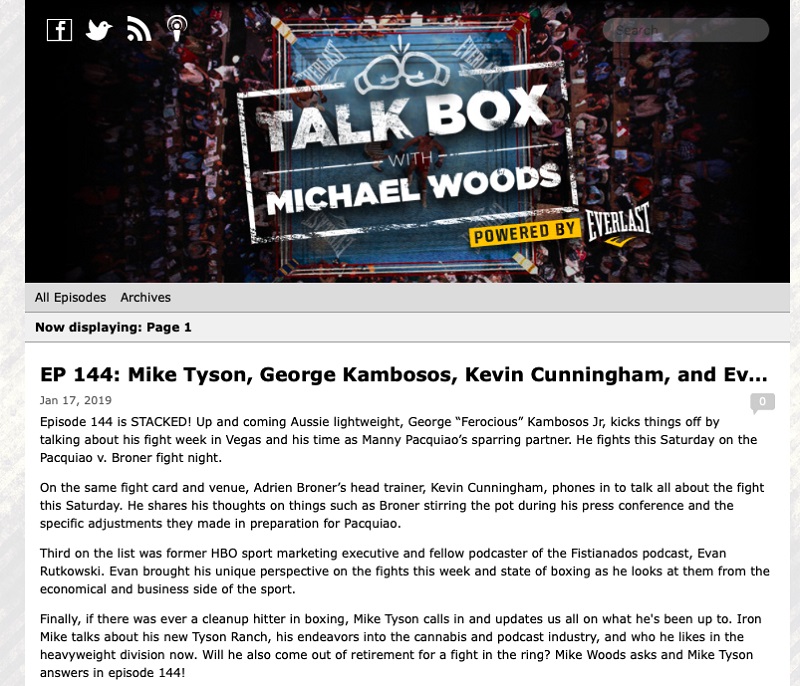 We also touched on the Sweet Science. Tyson thinks boxing can get back to the heights the sport enjoyed when he was in his heyday. I pushed back on that – gently, of course. I’m no fool – because I think it is rare that we get an ass-kicker who is also a compelling persona, like a Tyson, to come to the fore. “It takes time but it will come back around,” he stated.

What about this Manny Pacquiao vs. Adrien Broner bout on Saturday; will Tyson tune in? “I’m a fan of boxing, so I’m looking forward to seeing that fight. I think Pacquiao is going to win that fight, unless Broner brings his A-game to the event,” Tyson said. And what does Tyson think as he sees Broner stepping in it, hitting negative jackpots? He said he hopes Broner sees the light and finds his way, so he doesn’t get into any more trouble.

Other subjects touched on:

– Tyson told us how he likes to ingest marijuana.

– I asked Tyson which one Tyson fight a newbie should watch on YouTube.

– Is he pumped for the Errol Spence Jr. vs. Mikey Garcia fight? Does Tyson think 135 to 147 pounds is a bridge too far for Mikey?

– Is he a Tyson Fury fan and is the lineal heavyweight champion good or bad for boxing?

Michael Woods, a Brooklyn resident, was a staff writer at New York’s Newsday before joining ESPN The Magazine (2003-2011). He edited for TheSweetScience.com (2007-2015), publishes NYFights.com, calls fights for Facebook FightNight Live and hosts the “Talkbox” podcast for Everlast. You can follow him on Twitter @Woodsy1069.