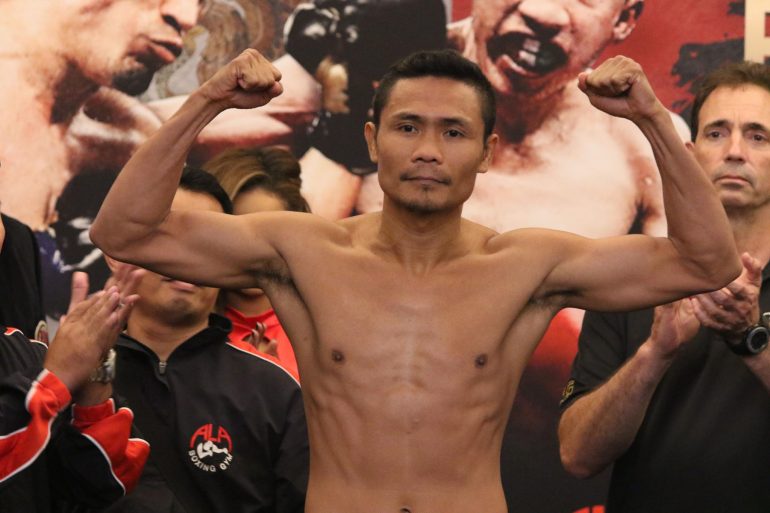 When the final bell rang in Macau, Donnie Nietes and team celebrated by lifting up “Ahas” and carrying him around the ring as if there was no doubt in their minds who had won the vacant WBO junior bantamweight title. By contrast, Kazuto Ioka, fighting for just the second time after a 19-month retirement, was reserved as he returned to his corner to await the judges’ tallying of the scores.

That body language continued during the tense announcement of the split decision verdict, when, with each fighter having received a score in their favor, Nietes pumped his fist against his chest in anticipation while Ioka covered his face with both hands, hoping to hear his name exclaimed.

Instead it was Nietes, the 36-year-old from the small town Murcia in Negros Occidental province, whose name was called out, entering him into exclusive company that includes Manny Pacquiao and Nonito Donaire Jr., as the only fighters from the Philippines to win world titles in at least four divisions.

“I was surprised of course because I knew I was leading,” said Nietes (42-1-5, 23 knockouts) Tuesday about the one scorecard that had Ioka ahead.

Nietes, along with his team that includes trainers Edito and Edmund Villamor, plus Michael Domingo, conditioning coach Nick Curson and promoter Michael Aldeguer, was at Hong Kong International Airport awaiting a flight back to Cebu City, having had a chance to look back at the fight. Early on Nietes got the better of exchanges, countering Ioka effectively with his shorter punches. Ioka (23-2, 13 KOs) made the adjustment beginning in the fourth to move away and not trade shots with Nietes.

“His style changed because was getting hurt from my punches,” said Nietes, who had previously held the WBO title at 105 pounds, the WBO and Ring championships at 108 pounds, plus the IBF flyweight belt before.

Asked whether he still held the opinion he expressed before the fight that Ioka would not be the best fighter he had previously faced, Nietes said he did.

“I didn’t find it too hard to fight because I figured out his style,” said Nietes.

With the title belt he had been denied after a controversial draw with Aston Palicte in September now in tow, Nietes says he wants to return his attention back to the big names at 115 pounds, namely Roman “Chocolatito” Gonzalez, Juan Francisco Estrada, and Ring Magazine champion Srisaket Sor Rungvisai.

“I want to fight to unify another belt,” said Nietes, who adds that he feels closer to 24 than 36.

Edito Villamor, when asked which of those three he preferred to face next, answered the Thai KO puncher Sor Rungvisai.

A potential rematch with Palicte could also be on the horizon, if Palicte gets past Jose Martinez in their WBO eliminator on January 31.

Promoter Michael Aldeguer said that Nietes’ first order of business is to relax with his children after missing out on the holidays while training.

“Donnie wants the biggest fights out there so we’ll see how we can put everything together as he may still have a  mandatory fight coming up,” said Aldeguer. “We’ll talk to Donnie after a well deserved rest.”

Having won a fourth world title also boosts Nietes’ credentials for the time when he’s eligible for induction into the International Boxing Hall of Fame. He says it’d be nice to get in one day, but declined to say outright whether he felt he was now a lock for Canastota the way Pacquiao and Donaire are perceived to be once they retire.

“Depends on the organizations if they’ll recognize me. If they do, I’ll be happy,” said Nietes.