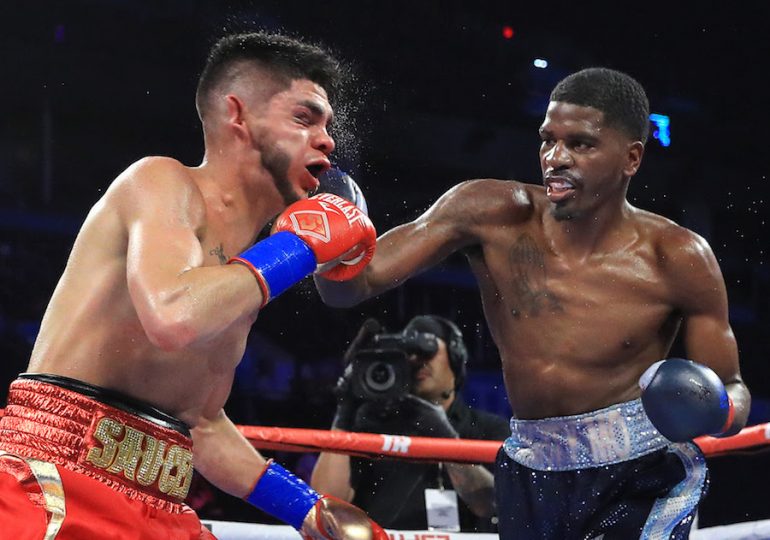 Maurice Hooker tasted Alex Saucedo’s power in Round 2, but even the raucous hometown crowd in support of the title challenger wasn’t enough to dismay him.

The Dallas native dusted himself off after the counter overhand right dropped him to the seat of his pants in Round 2 and went right back to work. Hooker used his superior height and range to keep Saucedo at bay, and a series of right hands had Saucedo reeling when that same round concluded.

It was then Hooker (25-0-3, 17 knockouts) knew everything would be all right. Hooker continued to back off the hard-charging Mexico native with a steady diet of straight right hands as Saucedo’s face continued to swell. He seemed ready to go in Round 6, and the following frame, Hooker ended matters to retain his title.

The 29-year-old dropped Saucedo with a hellacious barrage of right hands. On unsteady legs, Saucedo soldiered on, but the follow-up attack was enough to persuade referee Mark Nelson to step in and end the contest Friday in Oklahoma City. Hooker shined in a thrilling fight on ESPN in the first defense of his junior welterweight title, and now he wants unification.

Hooker called for a bout next year with fellow 140-pound titleholder Jose Ramirez, who was ringside in Oklahoma City.

“Alex is a great fighter,” said Hooker, who outpointed Terry Flanagan in March to win the belt. He’s co-promoted by Eddie Hearn and his next fight will likely be carried by DAZN. “He came to fight, and I came to fight, and I went right at him. I knew the first couple of rounds would be tough, but eventually it would be my time to take over.”

Saucedo (28-1, 18 KOs) was the same ol’ fighter fans have been accustomed to watching. He’s a reliable action fighter who always gives his best effort, but the many glaring flaws in his game weren’t enough in his first matchup against world-class opposition.

The 24-year-old doesn’t know how to manage distance. Instead, he elects to fight at mid-range, and that was a recipe for disaster against a rangy fighter like Hooker who throws straight, crisp shots.

When he couldn’t finish off Hooker in Round 2, it was clear Saucedo was in some trouble, and now he has the first loss of his pro career, and a heartbreaking losing effort in front of his hometown fans.

“He’s a champion for a reason,” Saucedo said. “Now, I am going to rest, enjoy my family, and come back stronger. I gave it my very best in the ring.”

First title defense now in the books, Hooker is ready for bigger and better fights. After the finest performance of Hooker’s career, his confidence will only soar from here.