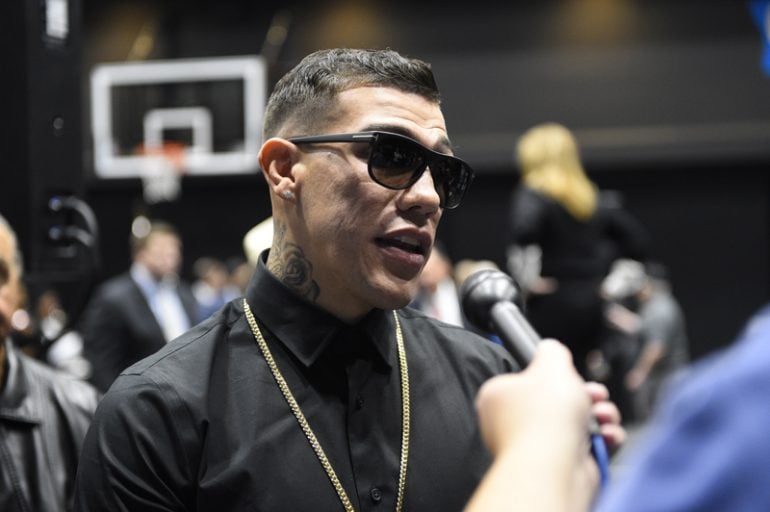 “King” as they call him in the gym, has been waiting patiently for the right time to make his ring return.

Former world title challenger Gabriel Rosado last saw action 12 months ago when he punched Glen Tapia’s ticket with a sixth-round TKO in Las Vegas. After signing with DAZN, the Philly native now jumps back into the middleweight mix against Milwaukee’s Luis Arias at the Kansas Star Arena in Mulvane, Kansas, on Saturday.

Arias was on an 18-fight unbeaten streak before he fell to Danny Jacobs last year on HBO. “He was on his bike against Jacobs. He stepped up a level and choked,” Rosado told The Ring.

The insults began when the pair met face-to-face in New York City at the press conference for a card that also includes Jarrell Miller and Brandon Rios. Arias was outfitted with a “Jason” mask and hawked provocations at Rosado who sat back and listened to his testy opponent. “Usually happens with guys who aren’t confident,” quipped Rosado when telling this writer about fighters who get excited at pressers.

Arias continued this week, telling The Ring that Rosado is a “human punching bag.” and a “perfect opponent who is gonna stand right in front of you.” Rosado shook off the comments telling this writer “That dude can try to do whatever he wants. Nothing he’s gonna do is gonna work. He’s too slow. He’s flat-footed. He can’t hit half as hard as any of the top middleweights I fought. If GGG couldn’t put me down, what makes him think he can? None of those guys put me down.”

Rosado continued “My goal is for people to have seen how good of a boxer I am. I think people think of Gabe Rosado and they see the warrior and the big heart. They’ll see my skills on display against Arias.”

Billy Briscoe, Rosado’s trainer, and a fellow Philly native, told The Ring “He’s [Arias] a tough character. He’s everything they say he is and more. I don’t want people to say we didn’t fight the best Arias. We’re not preparing for the Arias with a broken blister in his foot (Arias apparently had a blister situation during the Jacobs fight.) I’m not preparing for that one. We are preparing for best possible version, not the injured version.”

So what about the claims that Arias and his team think they have you guys figured out? “At the end of the day, the person who can make the better adjustments will get the win. Archie Moore used to say, ‘We need to shuffle the deck until we get the hand we want,’ We gonna keep shuffling until we get what we like,” said Briscoe.

If the heated press conference was anything to go by, the Rosado-Arias tilt looks to be a tentative show-stealer. Both men know the winner becomes an attractive option for DAZN’s other champions: Canelo Alvarez, Danny Jacobs, and Demetrius Andrade. It’s all on the line Saturday night.

“I’m going into this fight so calm and so cool,” said Rosado. “He’s gonna eat his words.”