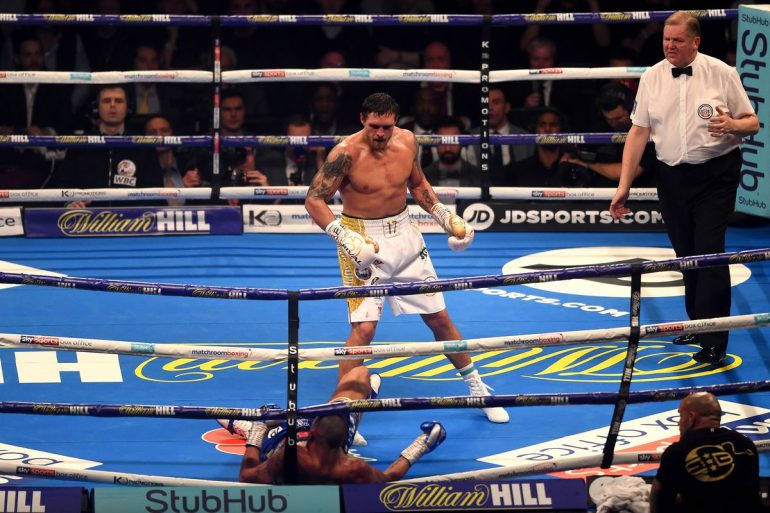 MANCHESTER, England – Perhaps not balletic on this occasion, but certainly brutal.

Undisputed cruiserweight champion Aleksandr Usyk lived up to the hype once again by scoring a one-punch, eighth-round knockout over Liverpool’s Tony Bellew at the Manchester Arena on Saturday. The official time of the stoppage was 2:00.

Usyk, The Ring champion at 200 pounds, took a while to get going, largely because Bellew provided effective tactical resistance. However, the Ukrainian southpaw was finding openings before the midway point and closed the show with a massive left hand which put the Englishman flat on his back, his head draped over the bottom rope. Referee Terry O’Connor dispensed with the count and the fight was over in a flash.

“I was focused and concentrated during every single round,” said Usyk at the post-fight press-conference. “(Bellew) is a really dangerous man with some strong punches. I told him he’s a real man and a warrior. It’s good when warriors meets warriors.” 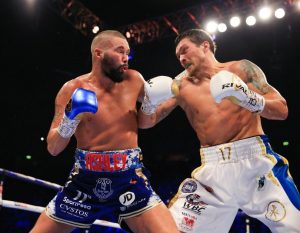 This famed Manchester fight venue is frequently noisy, but for this showdown it was literally prime Ricky Hatton noisy. The arena was vibrating as a fired-up Bellew put 20,000 fans in a perpetual frenzy during pre-fight pageantry, gesturing and yelling at his opponent who remained stoic throughout.

The first round consisted mostly of feints and battles for positioning, but it was Bellew who threw all the punches. There was nothing clean from either fighter, but the message was clear early – Bellew, surprisingly, was here to box. Usyk moved well, but he struggled to time Bellew due to the Englishman’s broken rhythm and alertness in the early going.

However, the champion began to warm up in the fourth, stunning his opponent with a whipping left hand. Initially Bellew had succeeded in slowing the pace by changing direction and moving his head, which forced Usyk to reset, but the Englishman suddenly became hesitant when the classy pound-for-pound entrant turned the screw.

The action remained two-way, but there was a noticeable change at the end of Round 6 when Bellew’s legs stiffened following another powerful left hand. Usyk continued to increase his work rate and was getting stronger, whereas Bellew’s output had dropped alarmingly. There was still some nifty counters, but the defending champion had claimed center ring and the danger signs were obvious. 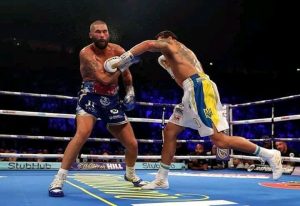 I had Usyk winning the seventh frame, and he continued to apply constant pressure in the eighth, trapping Bellew against the ropes and unloading. The challenger escaped but got caught in the middle of an exchange with a terrific shot. They don’t come any braver than Bellew, who had fought well to that point, but there was no way he was going to recover.

Usyk (16-0, 12 knockouts) is an incredible prizefighter and, risking hyperbole, it’s possible that the best is yet to come. If you hold a professional boxing license and weigh in above the 200-pound limit, then you’ve been put on notice. A new force is likely to enter boxing’s glamour division very soon, and you write this man off at your peril. With that said, the champion was non-committal about making the jump.

“You must be professional at making that type of decision,” said Usyk. “Right now my biggest concern is rest and I want to spent time with my family. I want to be able to spend time with my wife and children and then I’ll make a final decision.”

Bellew (30-3-1, 20 KOs) vowed that this would be his last fight, and there’s nothing more to prove. The charismatic Liverpool star goes out as a healthy former world champion and a multi-millionaire who can provide the best for his family. To accomplish that in a sport which is capable of betraying you is one massive accomplishment. “The Bomber” has been terrific for the sport and he will be sorely missed.

“Part of me feels I failed, but it’s boxing at the highest level,” said a clearly distraught Bellew who was in tears at points during the post-fight press conference. “I don’t give a fuck about the money. It’s over, I’ve been doing this for 20 years.

“I lost to the best fighter I’ve ever faced. He was awkward, he was intelligent. He did fall into my traps a few times, but, if I’m being honest, I got tired for the first time in my career. I’m a fan of his. I was a fan before the fight, and I’m a fan now that he’s beaten me.”