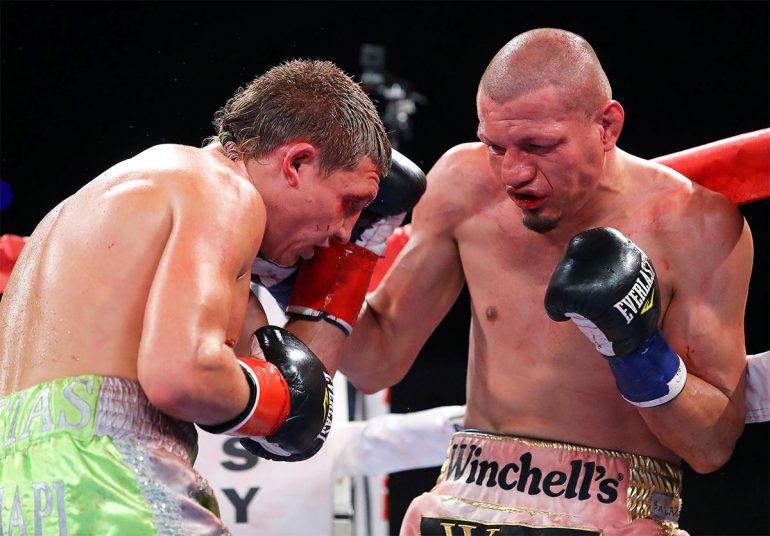 What a way for Jesus Soto Karass to end his boxing career, if indeed his clash with Neeco Macias was his last.

Soto Karass dug deep during the final rounds to win a hard-fought 10-round majority decision Thursday night at the Fantasy Springs Resort Casino in Indio, California.

With the win, Soto Karass snapped a six-bout winless streak and improved to 29-13-4 (18 knockouts).

The fight between the formerly unbeaten Macias, who is originally from nearby Palm Desert, and Soto Karass was a typical crossroads bout. Soto Karass said before the fight that he would rather retire, win or lose, than continue as a gatekeeper.

Macias sprung into action from the opening bell, taking the fight to Soto Karass and forcing him to fight in a corner with his back to the ropes throughout much of the fight. Known for his high-volume of punches thrown, Macias did not disappoint; he threw a whopping 325 total punches during the first two rounds.

Macias was winning the middle rounds with his sharper punches, but Soto Karass — who threw more punches in the fight overall — pressed forward during Rounds 6 and 7, landing right crosses or counter left hooks to his opponent’s head.

By Round 8, Macias’ punch output had dropped significantly. Soto Karass dug deep, outboxing and outworking Macias during the final two rounds of the fight. Both had their moments in the 10th round, connecting with several punches before the bell sounded. Afterward, the fighters embraced.

? Over 3,350 punches thrown (over 1,000 landed). Jesus Soto Karass wins a wild ten round majority decision. Congrats to both fighters on an amazing fight! #GBPonESPN pic.twitter.com/ih6Ab7G7Df

“I’m glad by the decision because I fought a tremendous warrior,” said Soto Karass, who resides in North Hollywood. “I tell people that win, loss, or draw that I fight for my fans. They were the winners tonight.”

Soto Karass might be open to a possible rematch down the line, should he decide not to hang up the gloves for good.

“I will sit down with my team and discuss what are my best options.”

Macias was diplomatic in defeat.

“I admire him representing his people,” said Macias. “In order for me to be at that level, I had to fight.”

In the co-feature, featherweight Manny Robles III won a 10-round split decision over Jose Santos Gonzalez.

Gonzalez was the aggressor during the first three rounds, but Robles got on track by the midway point of the fight. Robles hurt Gonzalez in Round 6, but was not able to land that decisive punch to notch a knockdown or knockout.

Francisco A. Salazar can be reached at [email protected] or on Twitter at FSalazarBoxing.