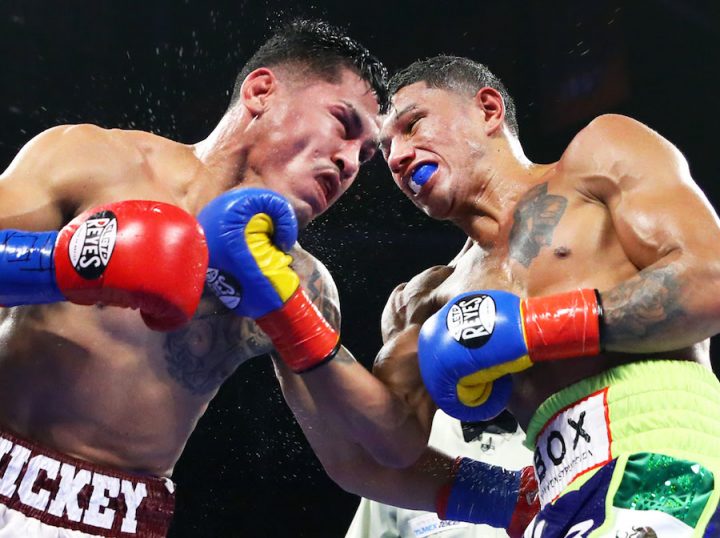 Berchelt wore down Roman in their all-Mexico battle, stopping him in round nine at the Don Haskins Convention Center in El Paso, Texas. With the win, Berchelt successfully defended his WBC 130-pound title for the fourth time.

The fight was billed as a ‘Fight of the Year’ candidate between two punchers in Berchelt and Roman and it lived up to that billing for the first three rounds.

Roman, who resides across the U.S.-Mexico border in Ciudad Juarez, was attempting to become the fighter from that city to win a world title belt.

It was Roman who was the aggressor from the opening bell, closing the distance and forcing Berchelt to fight off his back foot. The tactic worked well, particularly in round two as Roman connected with several hooks and crosses to the head of Berchelt.

After weathering the early onslaught from Roman, Berchelt began to wrestle control of the fight beginning in round four. Berchelt attacked the body of Roman, finding a home for left hooks to the body.

“The key was the work to the body,” said Berchelt after the fight.

Berchelt’s attack to the body paid off midway through round six. He landed two punches to the body, followed by a right cross to the head that dropped Roman to the canvas. Roman got up but was dropped again by a barrage of punches towards the end of the round.

Roman tried to rally but looked exhausted by round eight. Berchelt landed more punches to the head of Roman, who was in survival mode.

The end came a round later, when a combination dropped Roman to the canvas. Roman got up and attempted to fight back. Later in the round, Berchelt pinned a defenseless Roman against the ropes, where he landed a series of unanswered punches, prompting referee Jon Schorle to step in and stop the fight at 2:58.

There was a lot of trash talk between the two fighters leading up to the fight, but both fighters embraced after the fight in a show of respect.

“I fought a great challenger,” said Berchelt, who resides in Merida, Mexico. “It was the most difficult of my four title defenses. My respect to Mickey. He was a tougher fight than (Takashi) Miura or (Francisco) Vargas. He deserves my respect.”

Berchelt, who improves to 35-1, 31 knockouts, has mentioned unifying the 130-pound division in 2019. He is eying possible fights with the other titleholders.

“There are great champions at 130 pounds. There is (IBF titleholder Tevin) Farmer, (WBA titleholder Gervonta) Davis or (WBO titleholder) Masayuki Ito. I want to unify against those fighters.”

Roman drops to 60-13, 47 KOs. At 32, there is not telling whether Roman can return to become a mandatory challenger or receive another world title shot. The loss to Berchelt was Roman’s third attempt at a world title.

“I’m sad for my fans for the support they gave me,” said Roman, who had won his previous four bouts. “I’m embarrassed. I’m going to rest and see what’s next for me.”

“I gave it my all in this fight. My respect to Miguel. He’s a great champion.”

Marriaga dropped the veteran Estrella (20-15-1, 14 KOs) with a left hook to the head in round three. After getting up from the knockdown, Estrella was in survival mode, throwing one punch at a time.

The end of the fight came late in round four as Marriaga landed a well-placed left hook to the body, dropping him to the canvas. Estrella writhed in pain as referee Rocky Burke stopped the fight at 2:43.

“He was a very tough and strong opponent,” said Marriaga, who improves to 27-3, 23 KOs. “I know he trained hard for this fight, but I trained harder. My experience was key in getting the victory. The plan was to attack the body and that’s exactly what I did.”

“I know that I have what it takes to become a world champion. I want to challenge for another world title.”

Rodriguez, who signed a promotional deal with Mayweather Promotions in December of 2016 after his deal with Top Rank expired, dropped Tapia in round one and twice more in round two. Referee Robert Velez stopped the bout at 1:57.

“I was anxious and excited to get back in there after such a long time out of the ring,” said Rodriguez after the fight. “It was a long time coming, but I did what I had to do and got the job done.”