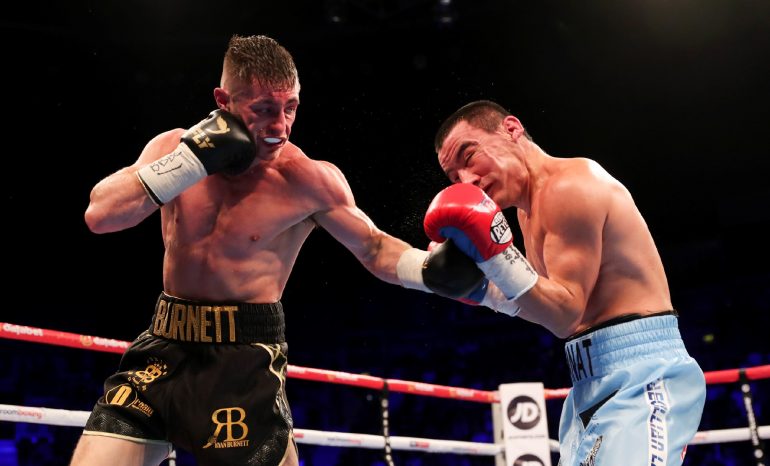 In this day and age, the sport of boxing is frequently sold on pantomime.

Former heavyweight champion of the world Tyson Fury is as adept at throwing a table across a room as he is at switch-hitting. His equally bombastic December opponent, Deontay Wilder, has been warming up for his eighth WBC title defense by laying out a defenseless 5-foot tall mascot on live television.

Isn’t it refreshing when you get a fight between two gentlemanly warriors who will turn on the aggression when it matters most? Welcome to the buildup for Ryan Burnett vs. Nonito Donaire, a World Boxing Super Series quarter-final at bantamweight which takes place this Saturday at the SSE Hydro in Glasgow, Scotland.

Burnett, who is rated No. 3 by The Ring at 118 pounds, is the former unified bantamweight champion and the reigning and defending WBA titleholder. In June of last year, the sharp-shooting Belfast technician handily outpointed Lee Haskins over 12 rounds to annex the IBF title, before adding the WBA belt with another solid points victory over Zhanat Zhakiyanov four months later.

“I’m blessed to have unified the division already at the age of 26,” said Burnett, who relinquished the IBF belt in February. “The World Boxing Super Series gives me an opportunity to continue to fight the best fighters out there. It’s the best versus the best and it’s a huge opportunity. It’s also great for the fans to see the best possible fights and it’s great for boxing.”

The WBSS gala draw took place in Moscow in July. As No. 1 seed, Burnett was given the opportunity to select first, and he immediately picked out Donaire, a legendary four-weight world champion who he has admired for years. How far does that adoration stretch? During the summer, Donaire was in Belfast for his high-profile showdown with Carl Frampton when Burnett went out of his way to meet him face-to-face.

“A few months ago I got a phone call to say Nonito was going to be at a shop and would I like to come down and meet him,” recalled Burnett. “I said, ‘absolutely.’ I couldn’t believe I was going to meet Nonito Donaire. I went down and met him and I was so starstruck. I was just in awe of this guy that was in front of me. Little did I know, my next fight would be against him.”

Burnett (19-0, 9 knockouts) is personable, articulate, charming and very down to earth. However, his kindness should not be taken for weakness, and any respect he has for Donaire will be put on hold when the bell rings for his fourth world title fight.

“When Ryan walks out of the changing room on fight night he is a totally different person from what you’ll see at any other time,” stated acclaimed coach Adam Booth, who laughed at the notion of Burnett showing his idol any mercy.

“Ryan is fighting one of the most accomplished boxer-punchers of a generation. Make no mistake, (Donaire) troubled Carl (Frampton), buzzed him twice, I think in the 11th round, at ‘featherweight’. He is a natural ‘bantamweight’. When I’ve been watching Donaire, I’ve been watching him in his prime. I’ve seen it before, at any point fighters with that grade can turn it on.”

Burnett, being a huge fan of the ex-champion, is also acutely aware of the threat and overall quality in the opposing corner.

“Nonito still carries power and he’s already been bantamweight world champion,” said the defending titleholder. “He’s well-known for that big left hook and there’s lots of things that I need to look out for. I’m not overlooking Nonito Donaire whatsoever. He’s a great fighter and he’s got the track record that speaks for itself. But I’m young, I’m hungry and I know exactly what I want in life. On Saturday night, I’m going to collect it.”

Two fighters at very different stages of their respective careers will touch gloves, duke it out and shake hands when the better man has been established. Isn’t that what it’s all about?