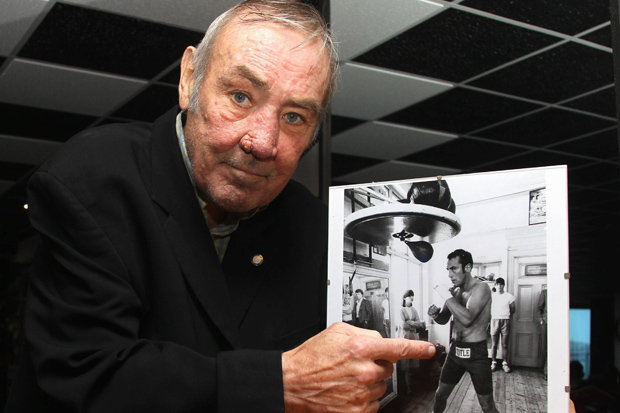 Editor’s Note: With the recent passing of former undisputed middleweight champion Alan Minter, The Ring now re-presents his Best I Faced feature. This feature was originally published in October 2018.

Alan Minter enjoyed a relatively brief but successful professional career, winning the undisputed middleweight championship in 1980. He followed in the footsteps of respected countrymen Randy Turpin and Terry Downes in previous decades to claim the 160-pound throne, upsetting the pre-fight favorite.

Minter was born in Crawley, East Sussex, on August 17, 1951. His early years went without incident before taking up boxing as a 12-year-old.

“I went to school in Crawley and that’s where I started to box,” Minter told The Ring. “I enjoyed it but occasionally you had the rucks with other kids.”

When Minter was 14, he left school and worked for his father’s plastering company, all the while he continued his amateur career. He was the 1971 ABA champion, leading to him being picked for the 1972 Munich Olympics.

Minter received a bye in the opening round; he then won three fights before heartbreakingly losing in the semi-final.

“I was fighting Dieter Kottysch; I lost a very bad decision,” he said. “He was born in Munich, lived in Munich. He never won the fight and he got the decision and he went on to win the gold medal and I got the bronze.”

Minter left the unpaid ranks with over 100 fights. His services were courted by British powerbrokers Mickey Duff, Jarvis Astaire and Mike Barrett. The trio worked together and he signed professionally with them.

He made his debut on October 31, 1972 at the famous Royal Albert Hall, London, on the undercard of stablemate John H. Stracey against Bobby Arthur, who contested the vacant British welterweight title.

The southpaw won his first 11 fights and was progressing nicely until he lost on cuts, having been ahead, to Don McMillan in June of 1973. It was the beginning of a bad run, in which he went 3-4. All four losses were on cuts.

This threatened to blight an otherwise promising career. Minter sought out the advice of the best doctors available.

“I went to Harley Street and had my eyes and skin examined and there was nothing wrong,” Minter explained. “They said, ‘You’re getting cut ’cause you’re getting hit.’ It come to me when I was in sparring. I’d hold my hands up high, move from the waist and don’t get involved. When you get hit, don’t rush in and try to get your own back, take your time and, by doing that, it worked.”

In the fall of 1975, Minter edged Kevin Finnegan to win the vacant British title. After making an initial defense, he bested Finnegan in a return to win the Lonsdale belt outright.

Minter impressively stopped fellow Olympian Sugar Ray Seales, who won gold as a junior welterweight at the 1972 Olympics. The talented Brit stepped up to win the European title against Germano Valsecchi, in Milan, in front of a sell-out crowd of 10,000, in February of 1977.

Cuts again slowed his progression and he lost two of his following three bouts. In between losses he beat the still serviceable former great Emile Griffith, in Monte Carlo, in support of Carlos Monzon-Rodrigo Valdes, who contested the middleweight title.

“[Griffith] had seen better days; he was on his way out,” Minter said. “To fight and be in the ring with one of the greatest middleweights the world has ever seen and to beat him on points, it was an education. You’re fighting someone who was unbelievable. He was on his way out but he still gave me a hard fight. You look his record. It was phenomenal.”

Minter lost the European title on cuts after the Griffith fight to Gratien Tonna. However he righted the ship, beating Finnegan a third time, in another bruising encounter. He then regained the EBU belt and stopped Tonna in his first defense.

The impressive form helped earn Minter a shot at Vito Antuofermo for the undisputed middleweight title in March 1980.

“The bookmakers over there, I think they had Antuofermo to beat me,” he said. “I wasn’t too bothered really. I’d seen him in training and watched videos of him and I knew I could beat him. It’s gone 15 rounds and a split decision and I got the nod.

“He thought he was robbed in his own country, so I gave him a return and stopped him in eight rounds in London.”

In September, the man largely recognized as the best middleweight in the world since Monzon’s retirement, the uncrowned Marvelous Marvin Hagler, came to London. Hagler ruthlessly picked the Brit apart in three-one-sided rounds.

“He was too good for me that night,” Minter said. “He’s a southpaw and I’m a southpaw. When a southpaw’s fighting an orthodox fighter, you go back and draw them in. You make them miss and counter it. With Hagler I went forward to fight him, so I’m going forward against another southpaw, so, as I’m throwing punches, I’m wide open and the punches he threw would always catch me, but then he would switch to orthodox and back again. He was something special.”

Minter is well placed, having reigned between two of the greatest middleweights of all time, to give an opinion on what would have happened had Monzon met Hagler.

Minter returned six months after losing his titles to Hagler but was never the same again. He won his comeback fight before losing to Mustafa Hamsho and then to Tony Sibson in three rounds, in a domestic battle for the European title.

“In that fight, Sibson saved my life,” he said. “When he caught me, he split my nose. I was in bed that night after the fight and my face is aching and I went to the toilet and looked in the mirror and my nose was literally across my face so I was rushed to Brighton Hospital.

“There was a germ in my nose, heading for my brain and they caught it just in time. The doctors said, ‘If it wasn’t for Sibson splitting the nose open, we wouldn’t have found the germ. That saved your life.’ He knows as well and I thanked him for it.”

“The time had come; I’d had enough,” Minter said. “I won British title, European and world, lost the world title to Hagler. There was nothing else to do and, when they made the Sibson fight, I didn’t really want to fight Sibson because my career, as far as I was concerned was finished, I’d had enough. My team said, ‘Fight Sibson and we’ll get another world title,’ but I’d already done it.”

Minter, now 67, is divorced, with two children, but lives with his partner in Guildford, Surrey. His son Ross boxed professionally.

Minter enjoys the fruits of his labor and is part of the after-dinner speaker circuit.

BEST JAB
Marvelous Marvin Hagler: “The reach he had was phenomenal, the right jab, him being short, but he had very long arms. It was deceptive. He would switch all the time. You just didn’t know what was coming. He’d throw a jab, then turn orthodox and throw another jab. He was all over the place. His jabs were accurate and they had a lot of power. It would go straight through you, especially when a man’s coming straight at you, it doubles the impact. The jab was spot on; whatever punches he threw from the jab were all dangerous. He had every punch in the book.”

BEST DEFENSE
Hagler: “Hagler had a good defense. Whether he was boxing orthodox or southpaw, the shots he would throw were phenomenal. He rolled and moved away from…he was very difficult to get a hold of, very slippery.”

FASTEST HANDS
Kevin Finnegan: “His jabs were accurate because of his brother Chris being a southpaw. I would think Kevin. Finnegan sparring with his brother, he was a very difficult man to avoid.”

BEST FOOTWORK
Emile Griffith: “He was coming to the end of his career. He was still maneuverable. No matter how clever you were or tried to be, he could get away.”

CHIN
Tony Sibson: “When I caught him, he never wobbled or anything. I didn’t land my best shots against Hagler.”

SMARTEST
Griffith: “Experience, very knowledgeable, over the years he’d been a pro and what he did in boxing. Even when I thought I had him, he was able to maneuver out of it.”

STRONGEST
Hagler: “You couldn’t push him back. He was physically strong.”

BEST PUNCHER
Hagler: “His timing was first class, when he threw a punch he got you. He wouldn’t throw and miss and he wouldn’t be out of distance. He was very heavy-handed.”

BEST BOXING SKILLS
Finnegan: “The way he threw punches, all his punches were put together and come as a package instead of a jab, a right hand. It was all fluid.”

BEST OVERALL
Finnegan: I don’t know how to explain it, why I’d pick him over Hagler, Griffith. There was just something in him, the ability of his style. He used to cut quite easily but the way he boxed was phenomenal.”