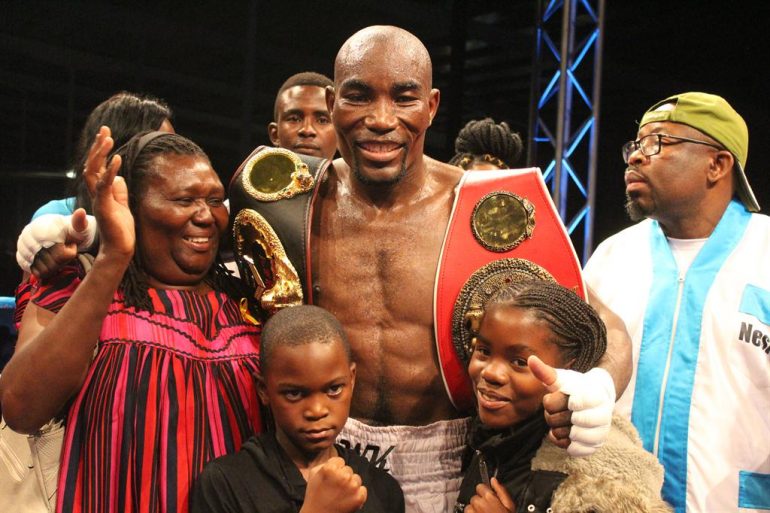 Confession: The first I’d heard of middleweight Walter Kautondokwa came when I was looking at the WBO rankings. I was wondering what might happen if the powers that be decide that WBO titlist Billy Joe Saunders isn’t licensed to fight in Boston on October 20 because he tested positive for a VADA-prohibited substance weeks ago.

Kautondokwa is rated No. 2 behind No. 1 contender Demetrius Andrade, who is set to challenge the Brit Saunders on a DAZN/Matchroom Boxing show, if things get ironed out and the PED positive gets resolved.

However if it doesn’t, we should learn more about this Kautondokwa guy. I asked around and fellow scribe Jake Donovan was kind enough to let me know a man named Nestor Tobias handles Walter K. Jake gave me Nestor’s email and I asked Nestor about Kautondokwa.

Nestor, could you tell us more?

“Walter ‘Executioner’ Kautondokwa is one of the hardest hitters we have ever produced. The boy has incredible power in both hands, which explains his incredible knockout record,” Tobias said. “Kautondokwa is a very disciplined athlete and very hungry for success. He trains twice a day, is dedicated to the sport of boxing and generally a very humble and God-loving man. He started his professional boxing career in 2013 and is, to date, unbeaten after 17 fights, with a record of 16 knockouts.”

Could the fighter who was born and lives in Namibia, a nation in southwest Africa, be considered a diamond in the rough?

“It is hard to say whether he is a rough or polished diamond. All I know is that, if given the opportunity, he will showcase his boxing skills and power and we pity the opponent that will stand before him,” Tobias continued. “All I can tell you is that we have a real gem and contender in the middleweight division.”

See some video for yourself. Here is Kautondokwa stopping 32-2 Obodai Sai in June 2017:

How is he rated higher than David Lemieux, I asked.

“He is unbeaten after 17 fights and he has now defended his continental WBO African belt successfully countless times. Lemieux is obviously a good boxer but he has had losses along the way, while Kautondokwa is undefeated. The WBO is one of the organizations with a very fair and transparent rating system and all our boxers that have gone up the ranking from Paulus Ambunda, to Paulus Moses to Julius Indongo have gone on to become world champions in their respective divisions.”

Any last thoughts, Mr. Tobias? “Africa is ready to unleash its best middleweight fighter and he is ready to take on the world and execute his way all the way to the world title. Watch the space!”