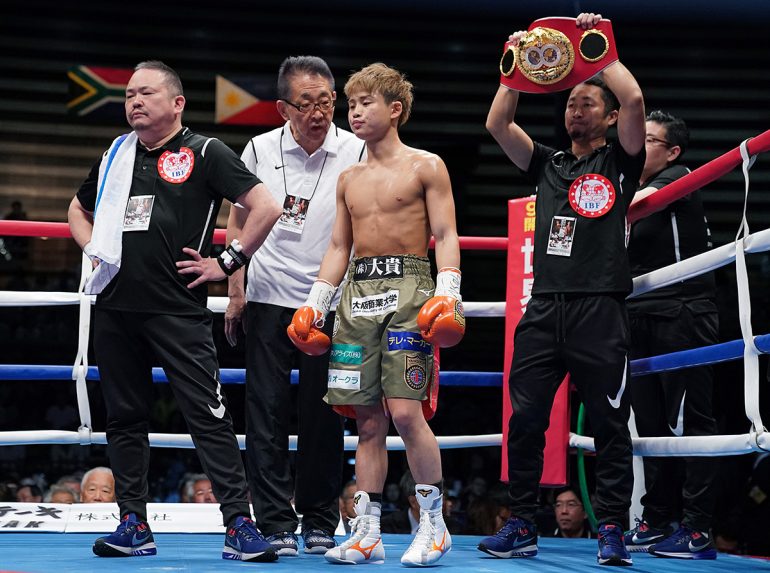 Hiroto Kyoguchi will make his junior flyweight debut on September 25 against Tibo Monabesa at the famed Korakuen Hall in Tokyo. For Kyoguchi, defending his IBF strawweight title twice was enough, as no one viable remaining in the division moves the needle for the budding star or the Japanese boxing public. A title unification with former WBO beltholder Ryuya Yamanaka had been one final fight that Kyoguchi had wanted to make before the division switch, though plans were scuttled when Yamanaka lost in his recent title defense and was sadly forced to retire due to a brain hemorrhage suffered during the loss.

The former titlist now wants to make quick work of Monabesa and return in December for a title fight. Kyoguchi told RingTV.com, “I want to fight with Angel Acosta first. After obtaining his (WBO junior flyweight) belt, I might fight with (WBC beltholder) Ken Shiro (in a unification match).”

A title fight with Acosta is relatively easy to make, while a match-up with Kenshiro “Ken Shiro” Teraji will need some momentum, as there are network affiliation obstacles to overcome. Kyoguchi and his Watanabe Gym stablemates fight on Tokyo Broadcast System (TBS), while Shiro is aligned with Fuji TV and has a nice reccurring role as chief support for Naoya Inoue cards. A hypothetical unification match-up with Shiro is in the grand plans for both camps and very much on the radar of the Japanese boxing community.

“At the moment, I believe that Ken Shiro is the strongest champion of this division,” said Kyoguchi.

First things first, Kyoguchi needs to get by Monabesa. “This is the first step towards my dream.” he continued through interpreter and Japanese boxing insider Shuji Aoki. “Training is hard but losing weight is easier (at the junior flyweight limit), so I can train as hard as I need to without any problems.”

To prepare for his upcoming bout, Kyoguchi (10-0, 7 knockouts) has been sparring with WBO flyweight titleholder Sho Kimura. Kimura will be defending his title the day before Kyoguchi’s card, on September 24 from Nagoya, against the brash former two-division titlist Kosei Tanaka, in a hotly contested affair. The two know that much depends on their respective fights, as the entire boxing world will revolve around them for the rare Monday and Tuesday night boxing action. While neither are stablemates, both of their gym presidents are Tokyo friends, which is why the intense sparring was allowed to happen at Aoki Gym, home to Kimura.

The 24-year-old is maturing nicely in the sport and a natural rise in weight was expected, though his time at 108 pounds will be a lengthy one, “I want to unify the belts of the light flyweight division, so I’m not interested in moving up to flyweight, for the time being.”

For Tibo Monabesa, the Indonesian gets his chance to show the world that he’s more than his bloated (and barely) undefeated record (18-0-2, 8 KOs) suggests. At 28, Monabesa will be making his first professional fight outside his native country and will have a stiff test but one that comes with massive upside, should he get lucky and manage an upset.

There’s no concern from Kyoguchi and his camp. They’re looking toward the future and their future is bright. In Monabesa, a Top 10 ranked fighter (No. 6 by the WBA; No. 8 by the WBO), offers them a nice introduction to their new division home and decent work, while dates for Kyoguchi’s next outing have already been secured for later this year.