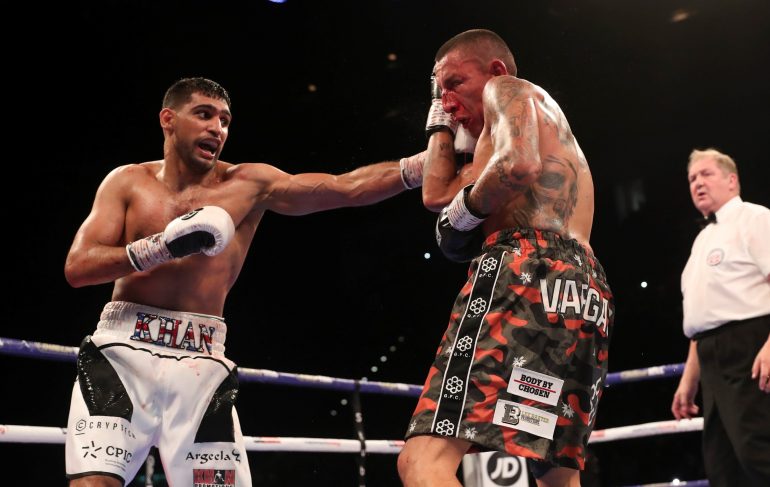 A perceived walk in the park that turned into all-out war.

In a knockdown drag-out battle, former unified junior welterweight titleholder Amir Khan survived an early knockdown to score a 12-round unanimous decision over the gallant Samuel Vargas at the Birmingham Arena in Birmingham, England. The official scores in this welterweight attraction were 119-109, 119-108 and 118-110.

After scoring a knockdown of his own in Round 2, the 31-year old Khan was punched off his feet by a right hand late in the same session. The ex-champion was badly hurt but responded well in the third, scoring another knockdown before maintaining discipline and settling into a smart boxing rhythm over 12 hard rounds.

“I really wanted to go the distance,” said Khan in an interview with Sky Sports in the U.K. “There were times in the fight where I could have put him away, but I stepped off him. I needed the rounds, and if I want to go in there with the Manny Pacquiaos and the Kell Brooks, then I need to go 12 rounds and get that experience.

“(Vargas) caught me with an overhand right, but it was more of a flash knockdown and I got right back up. You’ve got to learn from stuff like that. After knocking out Phil Lo Greco in 40 seconds, I wanted to get my feet wet and I did that. I want the biggest fights because that’s where I belong. Manny Pacquiao is my number one pick, but if it’s Kell Brook, it’s Kell Brook.”

As always, Khan came of out of the blocks fast. Vargas, a Canada-based Columbian, appeared shocked by the hand speed but shook his head after his opponent landed flush with a multi-punch combination in Round 1. Both Errol Spence and Danny Garcia managed to stop Vargas, and the home fighter looked very comfortable early on.

However in a Khan fight there is always a sting in the tail and the second round had the crowd in a frenzy. The ex-champion scored a knockdown with a whipping combination and looked poised to provide the early finish his fans craved. However, as the round drew to a close, Vargas followed a left jab with a crunching right hand to the jaw and down went Khan. And despite what he said to the contrary in his post-fight interview, the former amateur star didn’t look good and was lucky the bell sounded to end the round.

Khan did respond well in the third and decked his man again with an untidy flurry but, for the most part, he enjoyed a cautious cakewalk. There was one final moment of drama late in 10th when Khan was caught by another Vargas right hand and his legs looked set to betray him once again. He made it out of the round, however, and fought well down the stretch to secure his victory.

Is Khan still world level? On this evidence, he would have serious trouble against the welterweight elite. Young lions like Errol Spence and Terence Crawford to one side; if either Pacquiao or Brook hurt Khan the way Vargas did, they would both be favored to finish him off.