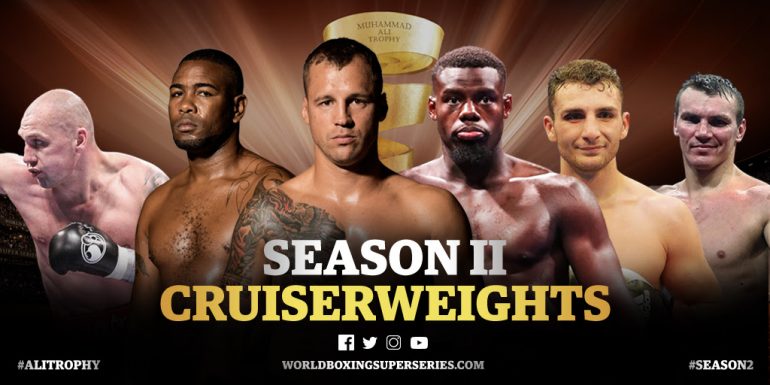 The World Boxing Super Series’ mission is to crown the best fighter in each weight class, and they delivered in Season 1 when Alesksandr Usyk emerged as the unquestioned king of the cruiserweights.

He emerged with all four sanctioning body titles in addition to The Ring cruiserweight championship amid a dominant victory over Murat Gassiev. Usyk is moving on to a likely fall meeting with Tony Bellew, but the cruisers are returning to World Boxing Super Series for Season 2 with a new eight-man field.

The winner of the tourney won’t be the ruler of the division, but there should be plenty of more action scraps between the participants.

Mairis Briedis, The Ring’s No. 1 cruiser, and Yunier Dorticos, the fourth-rated fighter at 200 pounds, return after breakthrough performances in the previous iteration.

A 33-year-old from Latvia, Briedis (24-1, 18 knockouts) dropped a split decision to Usyk in the semifinals, and he’s now the No. 1 seed. The former titleholder meets Noel Mikaelian (formerly known as Noel Gevor) in a first-round matchup.

A 27-year-old from Germany, Mikaelian (23-1, 10 KOs) rebounded from his first professional loss, a split decision setback to Krzysztof Wlodarczyk, with a win over Isiah Thomas in September.

Dorticos (22-1, 21 KOs) is the No. 2 seed, and the hard-punching Cuban will meet Mateusz Masternak, 31, of Poland. Dorticos, 32, lost his title in a thrilling semifinal matchup with Gassiev that ended in a 12th-round stoppage. Masternak (41-4, 28 KOs) is coming off an April victory over Youri Kalenga, which avenged a loss from 2014.

Krzysztof Glowacki, the 32-year-old former titleholder from Poland, is the No. 3 seed, and he’ll mix it up with Maksim Vlasov of Russia. Glowacki (30-1, 19 KOs) is rated No. 5 by The Ring, and although he served as an alternate in the first season, his omission from the field was a surprise.

Glowacki won a cruiserweight title with a rousing 11th-round stoppage of Marco Huck in 2015, but dropped the belt via decision to Usyk in 2016. Vlasov (42-2, 25 KOs), a 31-year-old from Russia, is rated No. 6 by The Ring. His two professional defeats came when he was competing between super middleweight and light heavyweight — decision losses to Gilberto Ramirez and Isaac Chilemba.

The final first-round matchup pits Ruslan Fayer, a 27-year-old from Russia, against Andrew Tabiti, a 28-year-old fighting out of Las Vegas.

“Cruiserweight is one of the most exciting divisions, just look at last season’s unbelievable match-ups. So we are looking forward to a new season.”

Dates and locations for each fight will be revealed at a later date.