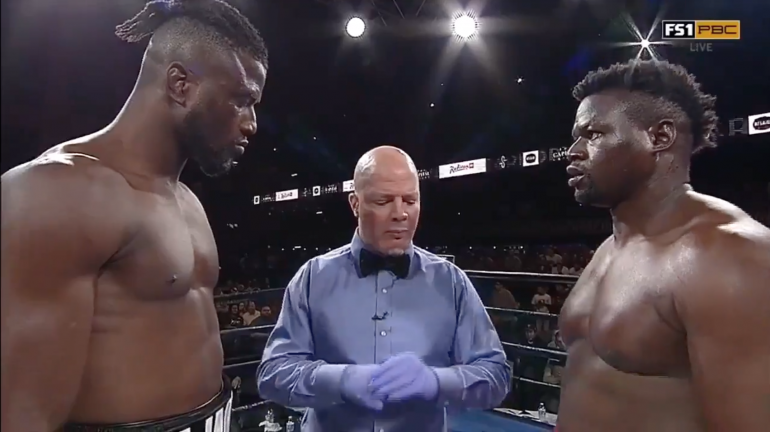 Just when you think you’ve seen it all, someone walks out of the ring at the opening bell.

That’s what happened during Friday’s Premier Boxing Champions on FS1 card emanating from the Minneapolis Armory in Minnesota. Curtis Harper, a heavyweight boxer from Jacksonville, Florida, stepped in the ring to face unbeaten Nigerian Efe Ajagba. And before either man could throw a single punch, Harper was gone.

The 30-year-old Harper (13-6, 9 knockouts) walked all the way along the ramp which cut the audience in half and into the back stage area, leaving a befuddled Ajagba in the ring wondering what happened.

The official time of the disqualification is :01 with Ajagba moving to 7-0 (5 KOs) in an unexpected manner.

First time I’ve ever seen this: heavyweight boxer Curtis Harper walks out of the ring at the opening bell for his fight against Efe Ajagba on live TV! Ajagba wins by DQ without a punch thrown #PBConFS1 pic.twitter.com/U8EH9Vaduf

Harper’s exhibition was night-and-day from his 2015 effort against Chris Arreola, when he got off the canvas in the first round and gave the perennial contender all he could handle for eight rounds. Harper hadn’t fought in a year, since he stopped Andrew Greeley in three rounds in Alabama.

What was running through Harper’s mind when he made that career-changing decision? Was it nerves? Did he suddenly have to use the restroom? According to PBC on-air reporter Jordan Hardy, he said it was a protest gesture because he felt he wasn’t getting paid enough money to fight Ajagba.

Whether that reasoning is what he truly felt, it can’t help his cashflow potential by showing promoters that making it to the ring isn’t a guarantee that he’ll perform. An email to the show’s promoter Leon Margules about whether Harper will be paid for his appearance, and whether he faces any ramifications from the local commission for the display, was not immediately responded to by the time of this story’s publication.

Harper’s trainer and former lightweight champion Nate Campbell let his feelings be known on his Facebook page, writing “I was so embarrassed! This man disrespect himself his wife the fan and me!”

Campbell did not have advanced knowledge that Harper would walk out on live television, though a post on Harper’s page earlier in the day suggested he wasn’t certain he’d be leaving Minnesota with his hand raised.

“Win or Lose… there’s still a fight within me,” Harper wrote on a public status update which has since been deluged with comments voicing displeasure at his display.

Commentators, including trainer Virgil Hunter and champion Jermall Charlo, struggled to find a precedent for the matter. New Jersey-based promoter Alex Kut of KEA Promotions said he had one incident like that in 2013 when Phillip Triantafillo walked out of the ring before his fight against Patrick Farrell in North Bergen, N.J. As the bell hadn’t yet rung, it was not ruled a disqualification and isn’t reflected on either fighter’s record.

Harper wasn’t the only fighter in Minneapolis who left the ring unexpectedly.

Usually a fighter getting knocked out of the ring signals the end of the bout, but Jamontay Clark showed the heart of a warrior by beating the 20-count to continue fighting. It wasn’t his night though as Jeison Rosario (16-1-1, 11 KOs) used his power and aggression to bully Clark (13-1, 7 KOs) to hand the Cincinnati native his first loss in their 10-round junior middleweight fight.

.@JamontayClark gets knocked out of the ring by Jeison Rosario in round three! What guts by Clark to get back in the ring and fight! #PBConFS1 pic.twitter.com/XhtFMr3gE5

Rosario, 23, of the Dominican Republic has now been unbeaten in his last five fights since being stopped by Nathaniel Gallimore in six rounds last year.

Eimantas Stanionis, a 2016 Olympian representing Lithuania, continued his development, going the distance for just the second time in a unanimous decision win over the appropriately nicknamed “Wolf” Levan Ghvamichava. Stanionis, a welterweight who is trained by Ronnie Shields, utilized a strong jab and consistent body attack to earn the scores of 80-72 on one card and 79-73 on the other two.