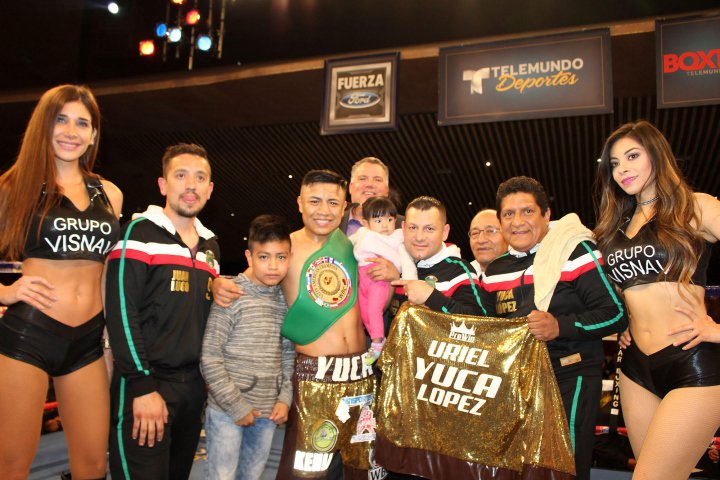 In junior featherweight action, Mexico’s Victor Uriel Lopez proved his first fight with Antonio Tostado was no fluke by stopping his countryman in the second round of a rematch Friday night at the Auditorio Blackberry in his hometown of Mexico City.

After a feeling-out opening round, Lopez wobbled Tostado with a left hook early in Round 2 and continued to batter his opponent for several moments with a heavy attack.

Rather than tie his opponent up, Tostada unwisely attempted to trade and that proved to be his undoing. A combination to the head from Lopez finally prompted referee Laurentino Ramirez to step in and stop the bout at 1:55.

“We studied him in the opening round,” said Lopez who has won six of his last seven fights. “We wanted to see if he was strong. He didn’t hit me hard, but when I saw the opportunity to score the knockout, I took it.”

Lopez (13-6-1, 6 knockouts) defeated Tostado by unanimous decision over six rounds in December 2013. The bout is not listed on Boxrec, but a YouTube video of the bout is available.

Tostado (22-6, 7 KOs), who resides in Jamay, Mexico, saw his seven-fight winning streak snapped. His most notable fight was a fourth round knockout loss to then-WBO junior bantamweight titleholder Omar Narvaez in May 2014.

In a clash of unbeaten junior bantamweights, Porfirio Gonzalez (3-0) dropped Jose Angel Rojas (2-1, 1 KO) in the second round of a scheduled six and claimed a unanimous decision victory.