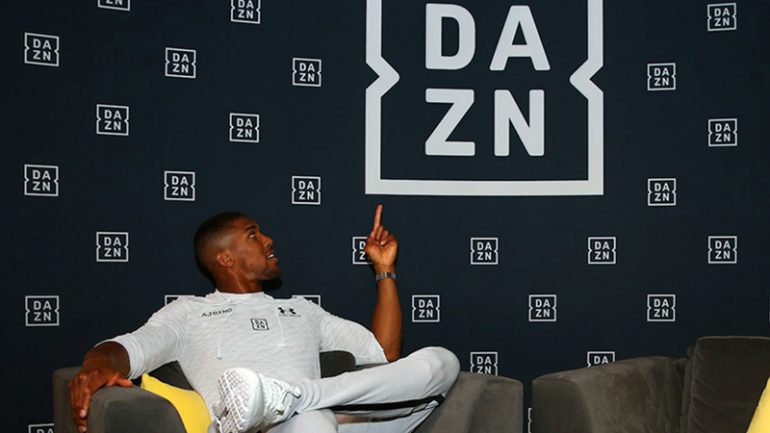 Anthony Joshua's IBF/WBA/WBO heavyweight title defense against Alexander Povetkin, on September 22, won't be seen on Showtime or HBO. It will only be available on DAZN's new streaming service in the U.S.
03
Aug
by Evan Rutkowski

This will be the first in a series of articles that looks at how the boxing world is adapting to the next technological age of broadcasting. Evan Rutkowski is a former HBO Sports marketing executive and host of the Fistianados Podcast, which looks at the business side of boxing.

The next stage in the evolution of boxing broadcasting isn’t around the corner – it’s already here. Two streaming services recently announced significant boxing content deals: Facebook Watch’s partnership with Golden Boy Promotions and Main Events, and DAZN’s partnership with the World Boxing Super Series. While the average fan might think of these as very similar deals in the streaming world, they are vastly different in their scope and outlook to the future. 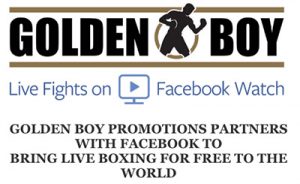 Facebook Watch, an “all-access” streaming service with no barrier to entry, perhaps the streaming service equivalent to broadcast TV that you get for free with an antenna, is dabbling into the boxing world with a low-cost, low risk offering. DAZN, a subscription-based streaming service, is much closer to pay-cable TV networks like HBO or Showtime. The company – which has partnered with promoter Eddie Hearn – is taking a different approach by planting its flag in the market and trying to appeal to hardcore boxing fans as it sets the stage for its eight-year, $1 billion investment in the sport.

In many ways, boxing is on the forefront of a technology wave that is striking the U.S. sports world. That may strike most readers as odd—boxing can be as old school as it gets—but there are a number of factors working in the sport’s favor. Notably, the sport doesn’t have a league structure that signs long-term deals with broadcasting partners, making it easy for a streaming entity to jump in. Boxing’s fan base, once decried as among the oldest out there, is actually now younger and more multicultural than ever and compares favorably to other major sports. Perhaps most importantly, the sports world in general lags way behind the rest of the entertainment world because it has anchored terrestrial television for far too long, and boxing is a great way for these new sports streaming services to experiment in a cost-effective way. 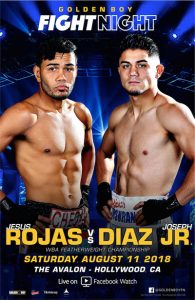 The Facebook Watch deal is for a minimum of five fights that will stream for free on the Watch platform. The first card takes place August 11, featuring Joseph “JoJo” Diaz Jr. in a comeback fight after losing in his first shot at a world title. It’s a decent matchup that resembles ESPN’s “Friday Night Fights” in concept—a lower level than most main events on premium networks but still potentially entertaining. Facebook Watch has been an interesting case study in what the future of “all access” streaming programming may end up looking like. Creative chief Ricky Van Veen has overseen a strategy where the model has been low-brow, gossipy type of shows that aren’t big financial swings. What does this mean for boxing you might ask? Well that mantra extends into the sports world, where Facebook has experimented rather than planted a flag. Watch televises 20 MLB games a year, 15 lower level college football games, some Champions League matches on Fox Sports Facebook page, some college basketball games, and has a partnership with the NFL that includes a major highlight package. Facebook Watch’s foray into boxing follows this incremental formulation—we’re not seeing eight year, $1 billion announcements with huge expectations but rather JoJo Diaz and Sullivan Barrera comeback bouts in what hopefully will be decent matchups.

This could be a good thing for all parties. Expectations are kept low, and early adopters to this new format can be rewarded over time. Part of the reason that Watch isn’t signing a major sports package yet is that those costs are extremely prohibitive. Live sports programming from the major U.S. leagues is the most expensive TV programming that exists right now, so Watch can get a chance to experiment and see what really works for their platform. If these lower-tier boxing shows prove to attract viewers to the platform and more importantly, drive engagement among viewers, then Golden Boy and Main Events will have many more opportunities to put on these types of fights. On that note, Facebook has a treasure trove of data on every consumer who has an account there, which in theory should make it easy to find boxing fans and let them know about any upcoming live fights on the Watch platform. This could be a very effective way to drive viewership, but there must be an internal commitment to this kind of marketing on the platform for it to work.

DAZN made a very different deal to become the exclusive broadcaster of the World Boxing Super Series’ second season of tournaments. In season one, the WBSS built big fights and stars in weight classes that previously had talent but lacked structure to make some of the bigger fights. It also managed to do this with no major U.S. broadcaster committed to the tournament, which previously was a major barrier for any entity. In doing so, the WBSS has engendered a huge groundswell of support among hardcore boxing fans, some due to the great action it provided, some due to the structure that hardcore boxing fans have longed for, and some due to the hipster-darling effect that it produced when no major U.S. TV outlet would pony up to televise the fights. Nothing articulated that feeling better than the Murat Gassiev-Yunier Dorticos semifinal bout, which most hardcore fans knew would be great in the buildup, turned out to be a fight of the year candidate, and fans were left looking for a YouTube stream to watch it. 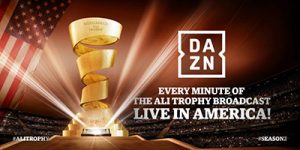 Many fans felt like the U.S. networks were ignoring or abandoning them—refusing to televise great fights at what surely would have been much lower fees than U.S.-based fights because of branding and time slot issues. This is where DAZN has come in, and they are surely hoping this move is looked at by hardcore fans as not only a welcoming gesture into the streaming service, but a message saying “Yes, we hear you and we will deliver what you want.”

DAZN has described their product as “Netflix for sports” and have already acquired other sports with the hope of eventually competing with ESPN. While DAZN aims to offer plenty of boxing, 16 U.S. dates a year including four “massive” cards as well as 16 dates a year in the U.K., the acquisition of the WBSS is aimed exclusively at the hardcore fans. The WBSS second season will consist of 15 fight nights and 21 matches across three weight classes, and, following the model of season one, it will be internationally based—but is expected to be mostly out of Europe. These dates will notably be in addition to the 32 fight cards previously announced. Despite the tonnage offered, the rumored price of $200 a year is still a lot to pay, and expectations will be high as to the quality of all these fight cards. Getting the WBSS second season is a significant, if not obvious, step in that direction. While hardcore boxing fans can be notoriously fickle, this should be a message to those fans that DAZN is committed to making them happy. If this message is well-received, then such fans will become the best brand ambassadors out there for a new streaming service.

While these deals fall into very different categories, one thing they have in common is that they are the early stepping stones towards building a successful boxing audience on streaming platforms. Whether or not these new streaming services can accomplish their goals using boxing, and whether they can ultimately build a sustainable, profitable business model, is a subject to explore in future columns.