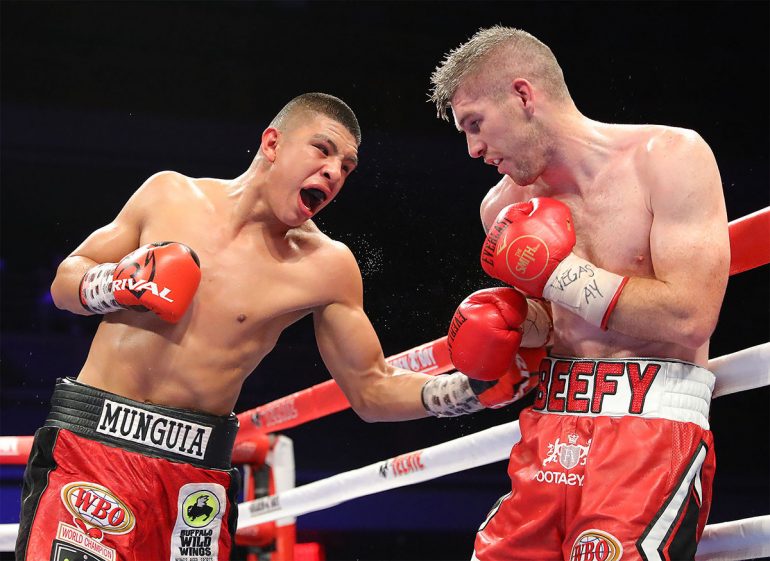 LAS VEGAS — We learned a lot about Jaime Munguia in his first title defense.

The Mexican action fighter proved that he’s must-see TV. That he’ll never stop coming forward while throwing vicious body shots. That he can go 12, hard rounds, which he did for the first time. And that at 21 years of age, he still has a long way to go.

Munguia’s defense was nonexistent, and his was jab lazy as he was countered over and over by Smith’s overhand right. But against an experienced, tough-as-nails opponent, Munguia (30-0, 25 knockouts) doled out a comprehensive beating in an exciting bout and improved his stock in his second consecutive HBO headline bout.

“He’s a tough opponent but I’m always looking for the knockout,” Munguia, who earned a career-high $200,000, said through a translator. “I’m a true Mexican. … I am a little green, no doubt, but this is experience that will help me for the next rival.”

Munguia unleashed a furious two-fisted assault from bell to bell. He marched forward and banged Smith’s body with left hooks to the midsection so hard you could feel them from ringside as they connected with a thunderous thud. But Smith hung tough and landed plenty of good shots of his own, including a left hook that staggered the titleholder in Round 3. 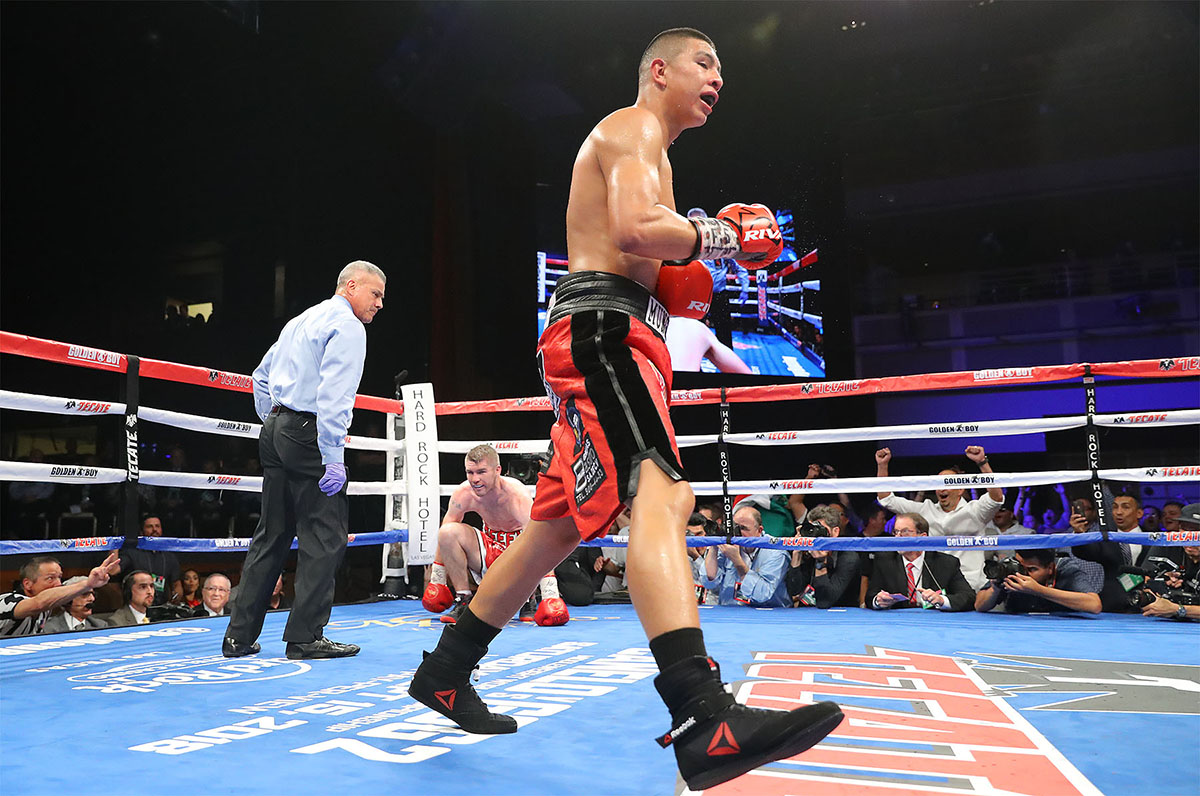 Smith (26-2-1, 14 KOs) elected to stand in there and trade, but he simply couldn’t match Munguia blow for blow. Munguia began to overwhelm the 29-year-old Brit in the fifth as he banged his gloves together, let out a howl, and threw everything but the kitchen sink at his foe as he loaded up on shot after shot.

If Smith was waiting for Munguia to tire, it never happened. But “Beefy” also never wavered against a much-stronger man as he absorbed an incredible amount of punishment over 12 rounds. He looked spent after he hit the canvas in the sixth, but he never stopped trying to win the fight, even though he was clearly outgunned.

“It’s his night tonight. He’s a good fighter. He answered a lot of questions,” said Smith, whose only other pro defeat came via knockout to Canelo Alvarez in 2016. “His power – I don’t want to disrespect him but Canelo hits harder. But he’s young and he’s probably going to get stronger. He’s a good fighter and he will probably only get better and better.” 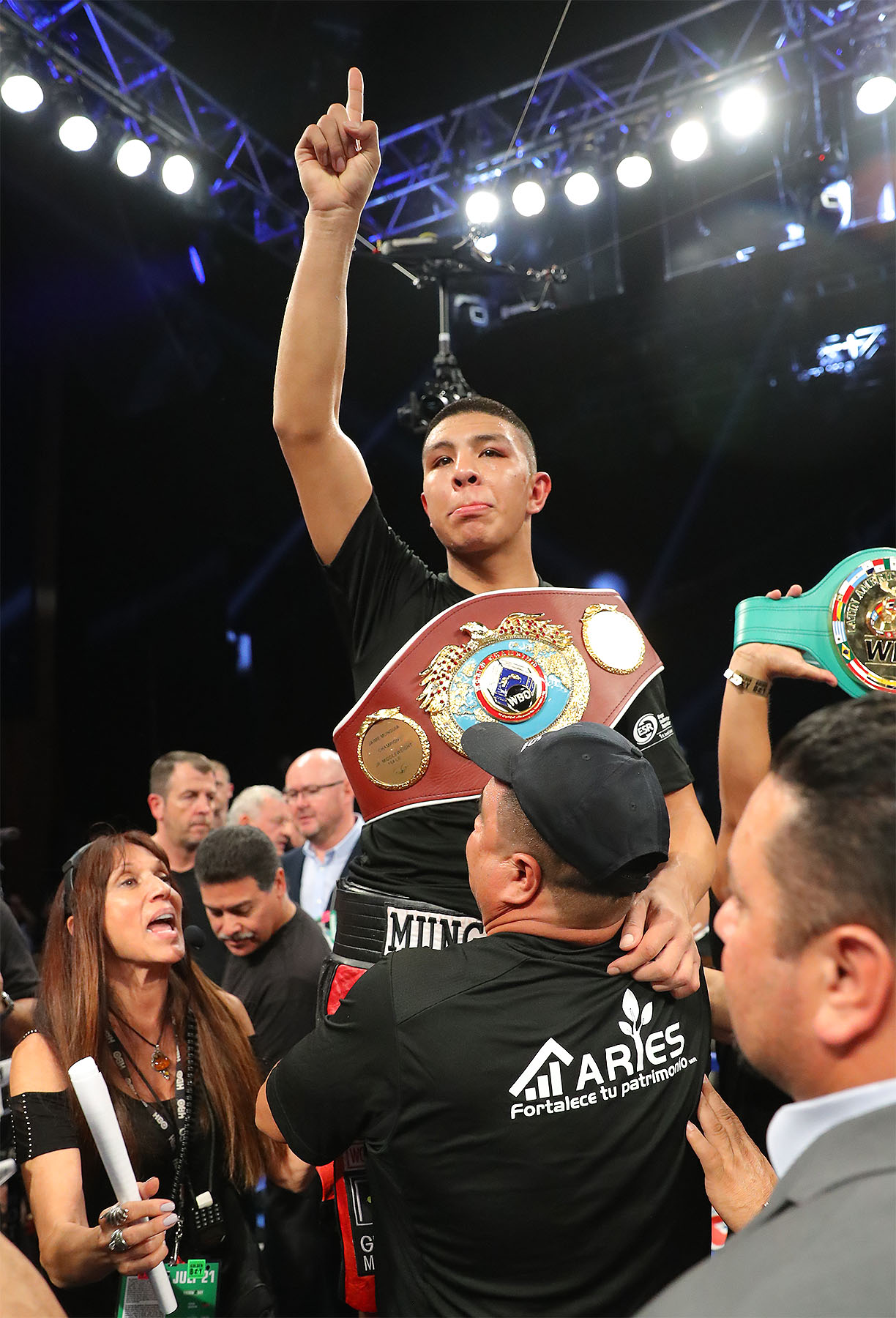 Munguia surely has upside, but he’ll need to tighten up his defense significantly if he’s going to compete with the elite of the division, namely Jermell Charlo and Jarrett Hurd. Munguia also will need to stop loading up on every shot; his punches loop wide, and against a sharp-punching fighter, he’ll pay for that mistake.

That’s likely what would have happened if he had fought Gennady Golovkin on May 5 in Las Vegas. Munguia accepted the offer, but Nevada State Athletic Commission executive director Bob Bennett declined to sanction the bout due to the fighter’s inexperience. Though he was named The Ring’s 2017 prospect of the year, he had never faced anyone remotely approaching the world-class level.

He finally faced such opposition when he stepped in for Smith, who was scheduled to fight Sadam Ali on May 12, but pulled out with an allergic reaction he was struggling with. Munguia knocked out Ali in four rounds to win a 154-pound title, and left fans salivating over the prospect of seeing the Mexican slugger fight again.

His performance against Smith will only grow the hype around him, but his team needs to be patient. And they appear to realize he’s still raw and has much to improve on.

Golden Boy Promotions staged Saturday’s card; they promote Ali and had a one-fight option on Munguia following the May bout. And the relationship with Munguia’s longtime promoter, Mexico-based Zanfer Promotions, will continue. Golden Boy Promotions president Eric Gomez told The Ring that they worked out something with Zanfer to continue promoting Munguia moving forward, but he declined to discuss details.

“He needs a little bit of work, he’s very young,” Gomez said. “He needs to work on his defense a little more; a little more head movement.”

Munguia is far from a finished product, but his quick ascent is a much-needed injection for a sport that could always use more action fighters, particularly from boxing-crazed Mexico. As Munguia headed out of the arena, fans swarmed, and they were boisterous in their support throughout.

He has a real chance to develop into a star, but that’s in the future. 2018 is already going pretty damn well for Munguia. Just a few months ago, he was a relative unknown quantity. Now, the hype train is firmly behind him, and no matter what the future holds, it’s pretty clear we have another reliable action fighter to depend on. 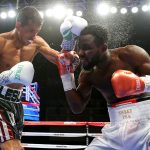 Alberto Machado (L) saw his title marginalized by the WBA’s decision to elevate Gervonta Davis, but the Puerto Rican remained undefeated with a decision over Rafael Mensah and a knockout of Yuandale Evans in 2018. (Photo: Tom Hogan – Hoganphotos) 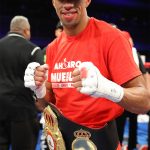 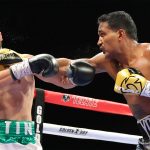 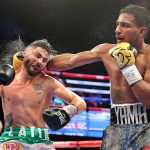 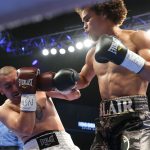 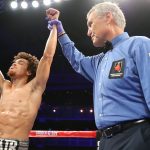 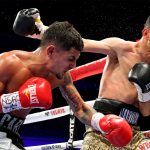 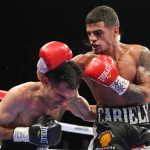