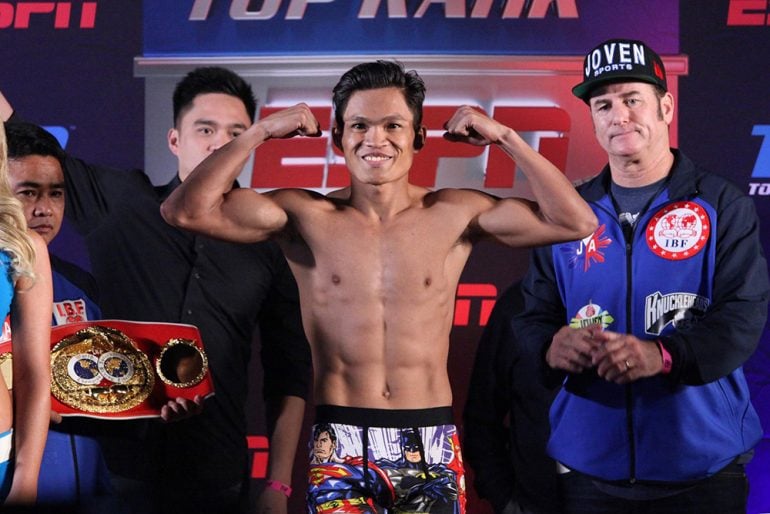 Junior bantamweight titlist Jerwin Ancajas flexes with his IBF belt on his right, and adviser Sean Gibbons on his left. Photo by Jhay Oh Otamias
13
Jul
by Anson Wainwright

Ancajas, who is ranked No. 3 by THE RING at 115 pounds, was given the gift by IBF president Daryl Peoples and ratings chairman Anibal Miramontes.

It was also announced that Ancajas (30-1-1, 20 knockouts) will make his sixth defense on September 14 in Fresno, California against an opponent to be announced. That fight will be co-feature to Jose Ramirez’s WBC junior welterweight title defense against Antonio Orozco.

“We had a great reception (in Fresno) last time,” said MP Promotions matchmaker Sean Gibbons. “We’re looking anywhere from 10,000 to 14,000 people. Jerwin made a nice impression with the people.

“We haven’t selected the opponent but we’re going to find someone aggressive.”

“The idea is to keep working through the rest of 2018,” said Gibbons. “I’d like to see (Jerwin) finish off the year with a couple of really good solid guys, then open up next year with something big: the Esradas, Rungvisais, unify the belts. That’s where we’re headed.” 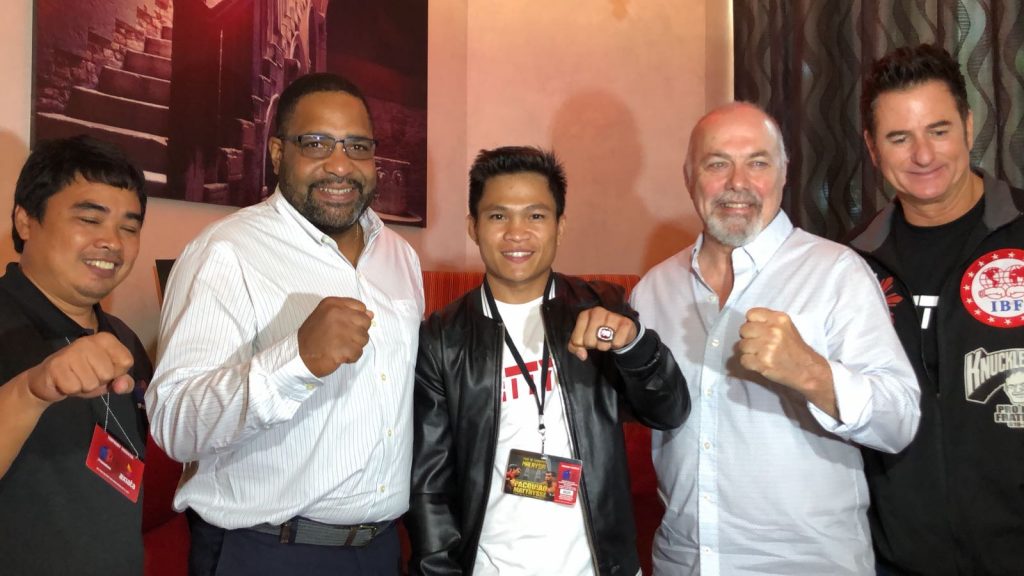 Interestingly, unbeaten WBA titleholder Kal Yafai, who Ancajas shared a card with in May, wasn’t mentioned. Earlier this year the idea was floated that the two – providing they won – would unify later in 2018. Both men did win but nothing has come to pass.

“Bob Arum threw it out there but he never really brought us any proposal,” explained Gibbons. “We don’t have a problem with Yafai but, to us, the big fights are Estrada and Rungvisai. Mexican-Filipino is the best market out there, that’s where we’re headed. If Bob came to us with something then we’d revisit the possibility of that fight.”

Gibbons also explained his rational of taking Ancajas to ESPN rather than the Superfly direction on HBO.

“Bob Arum is the greatest promoter in the history of boxing,” he said. “He knows the Filipinos and the ESPN brand is so much bigger than HBO with the ESPN 5 partnership in the Philippines.

“If Jerwin went to HBO, he would disappear into the woodwork. ESPN and ESPN 5 in the Philippines has elevated him to a point where he’s bigger in some ways – outside Estrada and Rungvisai – than all the SuperFly names. Being in the ESPN brand; it’s the biggest name in the global market and financially I think he does better with that.”