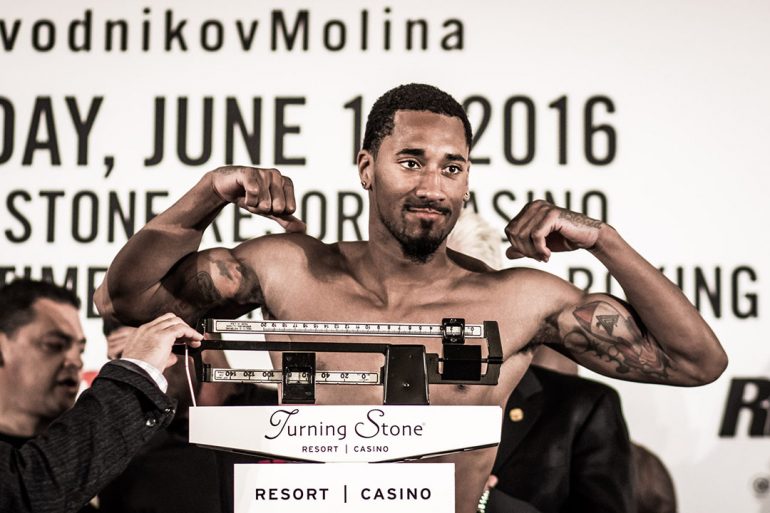 One of the most talented fighters in the world is now a promotional free agent.

Demetrius Andrade, who long has been inactive, reached an agreement on his release from the promotional contract he signed with Joe DeGuardia and Artie Pellulo, it was announced Thursday.

The middleweight contender is now free and clear to sign with any promoter, and according to sources, Top Rank, Matchroom Sport and Al Haymon all have already expressed interest. Terms of Andrade’s release were no disclosed due to a confidentiality agreement, but it’s expected he bought out the remainder of his contract.

“It’s been a long journey,” said Andrade, 30, who declined an interview request from THE RING but referred the publication to this prepared statement. “I’ve learned a lot and I really appreciate everything that Artie and Joe did for me and my career. Sometimes it seemed like it was us against the whole world trying to get the top fighters to get in the ring with me but at the end of the day Artie and Joe guided me to two world championships and I really want to thank them for all their efforts!

“I’m hoping to be back in the ring again very soon and get an opportunity to show the world that I’m going to be a world champion once again!”

Andrade (25-0, 16 knockouts) was mulling an offer to fight Yamaguchi Falcao on a July 21 HBO show, but that bout is now off the table. The Providence, Rhode Island, native hasn’t competed since he scored a decision victory over Alantez Fox in October, and his career has been marred by inactivity.

Andrade has competed just five times since November 2013, when he outpointed Vanes Martirosyan to win a junior middleweight title. “Boo Boo” was slated to fight Jermell Charlo in December 2014 in the first of a three-bout deal with Showtime, but the partnership never came to fruition.

He turned the offer down while then-fledgling promotional company Roc Nation Sports made a run at trying to sign him, and he, alongside Pellulo and DeGuardia, remain in a legal battle with music mogul Jay-Z’s outfit.

Andrade signed with Pellulo and DeGuardia fresh off his 2008 run as a member of the U.S. Olympic team. He became the first fighter to win a title from the squad, but he never tapped into his full potential. Part of the issue was the Showtime deal he missed out on. He was essentially frozen out from fights with Al Haymon’s slew of 154-pound titleholders who competed on the network, so Andrade opted to move up to middleweight.

His first fight at 160 pounds took place on HBO against Fox, but repeated efforts by Pellulo and DeGuardia to secure a meaningful bout on the network were thwarted due to lack of interest from HBO Sports boss Peter Nelson. One such fight was a meeting with Sergey Derevyanchenko that was in the works for December, and was still being negotiated earlier this year.

Pellulo told THE RING the split was “amicable” and called it a “very good 10-year run.”

“I believe Demetrius has the ability to beat any fighter in the world in his division, and I expect him to win
many more world titles in the near future,” Pellulo said in a statement. “I wish him and his family the very best.”

Andrade, THE RING’s No. 7 middleweight, is no doubt a player in boxing’s most star-studded divisions, one that includes Canelo Alvarez, Gennady Golovkin, Daniel Jacobs and Jermall Charlo.

The athletic southpaw possesses the talent and boxing acumen. It’s finally time for him to prove he belongs among the best.