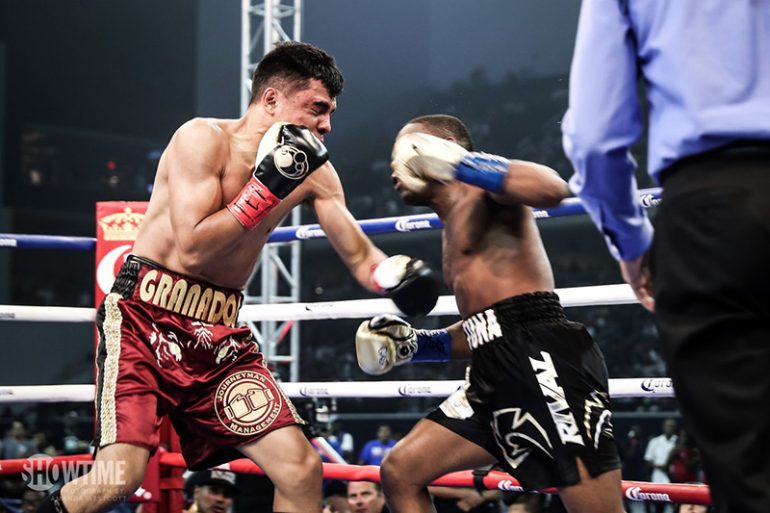 The fight was heating up.

Adrian Granados, the bigger man for a change, was exerting pressure during his junior welterweight fight with Javier Fortuna on Saturday in Frisco, Texas. Fortuna was moving laterally in an attempt to utilize his superior speed.

Fortuna was also hitting behind the head, and referee Robert Chapa showed off a quick trigger finger when he deducted one point from the Dominican native in Round 4. Moments later, he took another point away for excessive holding.

Fortuna shook his head, and fought with a sense of urgency, winging several bombs at Granado’s head. And then, the fight was over with 10 seconds until the fight would become official. Fortuna was deemed unable to continue, and the Showtime-televised bout was ruled a no decision at 2:50 of Round 4.

After yet another clinch, Fortuna slid below the second-to-bottom rope and free fell outside the ring. His neck appeared to collide with one of Showtime’s camera boxes, and the stretched immediately was slid to ringside.

Fortuna (33-2-1, 23 knockouts) grabbed the back of his neck, and swiftly, it was placed in a brace, and he was placed on a backboard before he was wheeled off and put in an ambulance.

Granados, who has been on the wrong end of bad luck numerous times, could only shake his head in disbelief.

“I think he played it off, I didn’t push him. I think he was looking for an excuse on his way out. He could feel I was getting more physical. He hit me with a good shot and I took it.”

Fortuna was fighting at junior welterweight for the first time after competing most of his career at 126 and 130 pounds. He moved up to lightweight for a title shot against Robert Easter Jr. in January, but actually failed to come in under the 135-pound limit.

He gave Easter hell in a tough fight, but the 28-year-old wasn’t able to capitalize on the momentum he created after the fight ended inauspicious fashion.