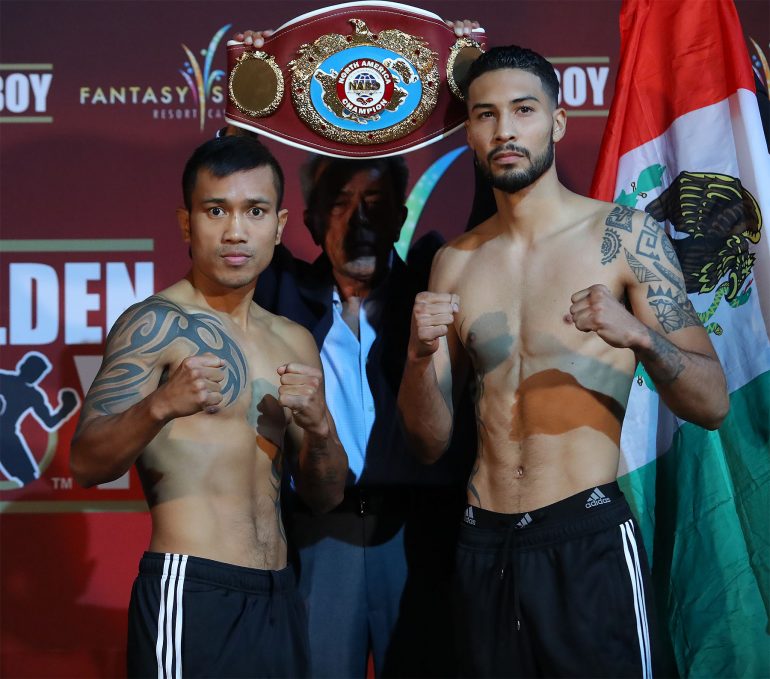 Mercito Gesta makes no excuses regarding his loss to Jorge Linares on January 27. The Filipino-American is convinced the fight will make him a better fighter in the long run.

That remains to be seen. In the short-term, Gesta needs to take of business tonight when he faces Robert Manzanarez at the Fantasy Springs Resort Casino in Indio, Calif. The 10-round lightweight bout will air live on ESPN (8:30 p.m. ET/ 5:30 p.m. PT).

At Thursday’s weigh-in, both fighters tipped the scale at 134.8 pounds.

Gesta (31-2-2, 21 knockouts), a southpaw from the Philippines who resides in the San Diego area, saw his six-bout unbeaten streak end with the loss to Linares. Gesta was compelled to get back in the gym after spending time after the Linares fight in Hawaii on his honeymoon with his newly-married wife.

“I was really motivated to get back in the ring after the Linares fight,” Gesta told THE RING earlier this week. “I really got going in early April when the fight was close to being announced.”

Gesta, who is trained by Freddie Roach, self-assessed himself after the Linares fight, where certain adjustments needed to be addressed.

“I learned a lot in the Linares fight,” said Gesta, who is currently not ranked by any of the major sanctioning bodies. “I could take a punch from Linares, who is one of the best lightweights in boxing. The fight gave me greater confidence and that I belong in the category of contender. Losing to Linares is part of the game, but I accept it and I know I’ll bounce back.”

Gesta will face a fighter in Manzanarez (36-1, 29 KOs), who himself has put together an impressive streak of victories. Manzanarez has won his last 15 bouts and now lives and trains in the Phoenix area.

Gesta, who will be at a significant height and reach disadvantage, believes a loss against Manzanarez will end any thought of not only winning but fighting for a world title belt.

“I know Manzanarez is not an easy opponent to prepare for. He has height, reach, but the scary thing is he’s hungry. I have to be more careful because he knows how to get inside. I don’t even look at Roberto Manzanarez as a stepping stone.”

In the opening ‘GBP on ESPN’ bout, featherweights Edgar Valerio and Manny Robles III will square off in a highly-anticipated 10 round bout.

The clash of unbeaten Southern California fighters could produce fireworkds early on in the fight. Valerio (13-0, 8 KOs) has stopped four of his last five bouts while Robles (15-0, 7 KOs) has knocked out his last three opponents.