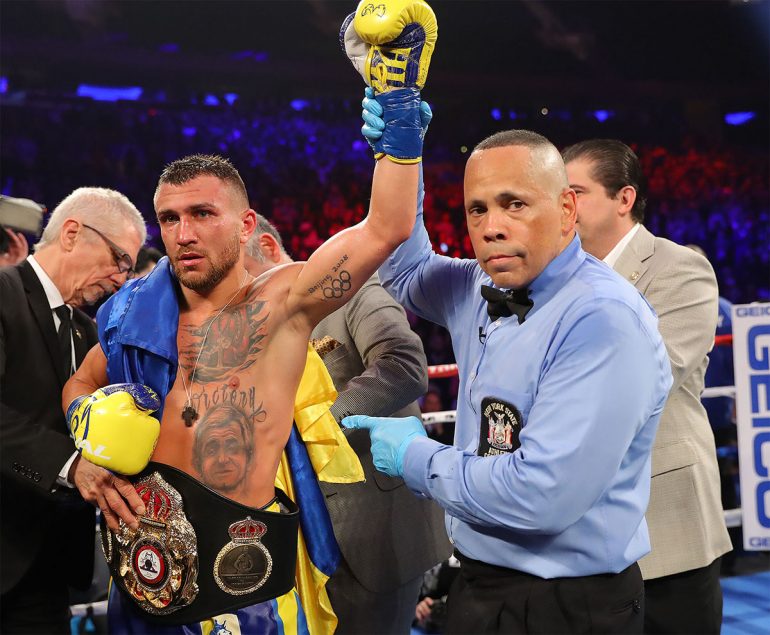 Vasiliy Lomachenko was considered pound-for-pound No. 1 by many fans and media, including ESPN.com, before his thrilling up-from-the-canvas stoppage of Jorge Linares on Saturday. Depending on who you ask, winning THE RING and WBA lightweight titles from the marvelously talented Venezuelan veteran either confirmed Lomachenko’s lofty status or proved that he’s not quite there yet.

Boxing’s longest reigning world champion, Gennady Golovkin, is No. 1 in THE RING’s pound-for-pound rankings. The Boxing Writer’s Assoc. of America places two-division champ Terence Crawford at the top of its mythical rankings. (In truth, boxing fans can’t go wrong with any pound-for-pound ranking combination of Golovkin, Crawford and Lomachenko as long as they’re in the top three.)

An argument can be made for any of the three being No. 1, but Lomachenko’s stats are undeniable. The brilliant boxing Ukrainian, one of the greatest amateurs ever, has won world titles in three divisions in just 12 pro fights, and the wizardly southpaw can count Linares, Guillermo Rigondeaux and Gary Russell Jr. – all highly skilled boxers – among his victims.

On the other hand, some believe that THE RING’s 2017 Fighter of the Year struggled against Linares, who was not in anyone’s pound-for-pound rankings and had the look of a fading fighter in his previous two bouts (a controversial split nod over Luke Campbell and a lackluster unanimous decision over Mercito Gesta). Many press row observers (including this one) had the fight even (85-85) after nine rounds. 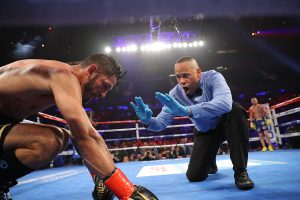 However, Lomachenko (11-1, 9 knockouts) did what the special competitors do when their backs are against the wall – he took his game to another level, overwhelming Linares with a fierce combination punctuated with a perfect body shot in Round 10.

Several members of the Ratings Panel, most of whom believed that the two-time Olympic gold medalist was in complete control of the fight apart from Round 6 when he was dropped by a Linares right hand, suggested moving Lomachenko from No. 3 to No. 1 in THE RING’s pound-for-pound rankings. Others, who thought Linares (44-4, 27 KOs) won at least three rounds, were hesitant to move Lomachenko up that far. The Editorial Board decided to move Lomachenko up one spot, past his Top Rank stablemate (Crawford) and within striking distance of GGG.

Cruiserweight – No. 6-rated Krzysztof Glowacki (30-1, 19 KOs) holds his place after scoring a first-round knockout of Santander Silgado on May 12 in Poland. No. 10-rated Andrew Tabiti (16-0, 13 KOs) moves up one spot to No. 9 (switching places with Ilunga Makubu) after stopping Lateef Kayode in six rounds on May 11 in Las Vegas. 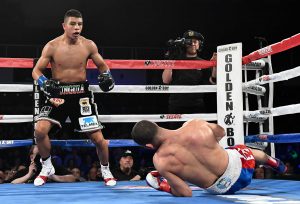 Junior middleweight – Unrated Jaime Munguia (29-0, 25 KOs), THE RING’s 2017 Prospect of the Year, enters the rankings at No. 4 with a brutal, WBO title-winning fourth-round stoppage of Sadam Ali on May 12 in Verona, New York. Ali (26-2, 14 KOs), who is probably better served heading back to welterweight, drops from the 154-pound rankings.

Lightweight – Lomachenko is the new RING champ. Linares drops to the No. 1 spot, displacing Mikey Garcia. The decision for Linares’ placement did not come without some debate (it’s no secret how much hardcore fans and Panel members LOVE Mikey). Anson Wainwright thought Linares only had a few “moments” against Lomachenko and suggested dropping him at No. 2 behind Garcia.

Marty Mulcahey and Mike Coppinger agreed. “Linares got the moral victory, but I’d go Garcia No. 1, then Linares,” said Coppinger. 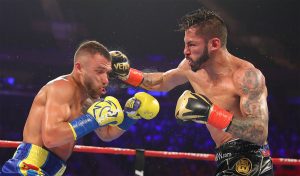 “Linares should be rated No. 1 right behind Lomachenko as the champ,” said Montero. “Garcia has done nothing in the division since his one fight at 135 pounds last January. Linares being competitive with Loma over 10 rounds and dropping him trumps anything Garcia has done in years in my opinion.”

Added Abramowitz: “I’d still rank Linares higher than Mikey at lightweight. He was excellent on Saturday and has a better body of work in the division.”

Talented Devin Haney (19-0, 13 KOs), who stopped Mason Menard (33-2, 24 KOs) after nine rounds on May 11, received recognition from several Panel members, who view the 19-year-old as a future contender.

Junior lightweight – No. 1-rated Lomachenko, who, prior to Saturaday’s showdown, stated that he would remain at lightweight if he beat Linares (and is expected to unify 135-pound belts against WBO boss Ray Beltran on August 25), exits the 130-pound rankings, making room for Russia’s Evgeny Chuprako (19-0, 10 KOs) to enter at No. 10. Unbeaten prospects Andy Vences (20-0-1, 12 KOs) and Erik DeLeon (17-0-1, 10 KOs), who fought to a 10-round majority draw in March, hover just outside the top 10.

Junior featherweight – No. 3-rated Rey Vargas (32-0, 22 KOs) defended his WBC title for the third time against Azat Hovhannisyan (14-3, 11 KOs) in the co-feature to the Ali-Munguia card. Although the Panel believes Vargas has a stronger overall resume than No. 2-rated Isaac Dogboe, they weren’t impressed by what they saw from the 27-year-old Mexican stringbean against the rugged but unheralded Armenian fringe contender. Thus, Vargas stays put at No. 3.