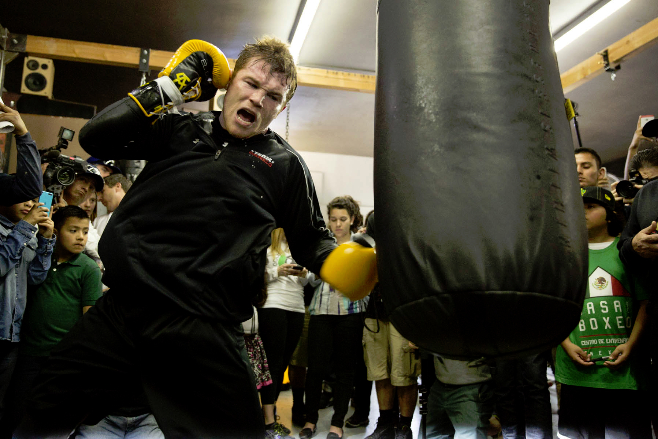 15
May
by Mike Coppinger

The move comes after Alvarez was removed from the WBC’s middleweight rankings for failing to enroll in anti-doping testing within the allotted amount of time. Alvarez tested positive for the banned substance clenbuterol on February 17 and on February 20 following urine tests conducted by VADA.

He blamed the adverse findings on contaminated meat consumed in Mexico, but the evidence of the powerful bronchodilator in his system led the Nevada State Athletic Commission to hand down a six-month ban, scrapping his highly anticipated middleweight championship rematch with Gennady Golvokin on May 5.

“I want to let you know that I just signed the contract for (VADA) for year-round testing,” Alvarez said.

“He did it for his fans,” Golden Boy Promotions president Eric Gomez told THE RING in a text message. “He has also been tested randomly by the Nevada commission, results coming out shortly.”

Alvarez’s inability to sign up for random drug testing in the immediate aftermath of his positive tests cast a cloud over any talks for a Golovkin rematch, as well as THE RING middleweight champion’s innocence.

However, he’s now being tested well in advance of his next fight, and in addition, a hair follicle test requested by the Nevada commission came back negative for any traces of clenbuterol last month.

The hair follicle test lent credence to Alvarez’s claim that he didn’t intend to cheat, according to former doping guru Victor Conte.

“This negative hair test for clenbuterol provides credible evidence that supports Canelo’s claim that his two positive urine tests were a result of eating contaminated meat,” Conte told THE RING last month. ” … In short, Canelo violated the strict liability rule that you are responsible for what is in your body no matter how it got there.”

Now, with one hurdle removed, it’s on the sides for both Alvarez and Golovkin to meet at the negotiating table and strike a deal for the encore encounter the boxing world is waiting for.