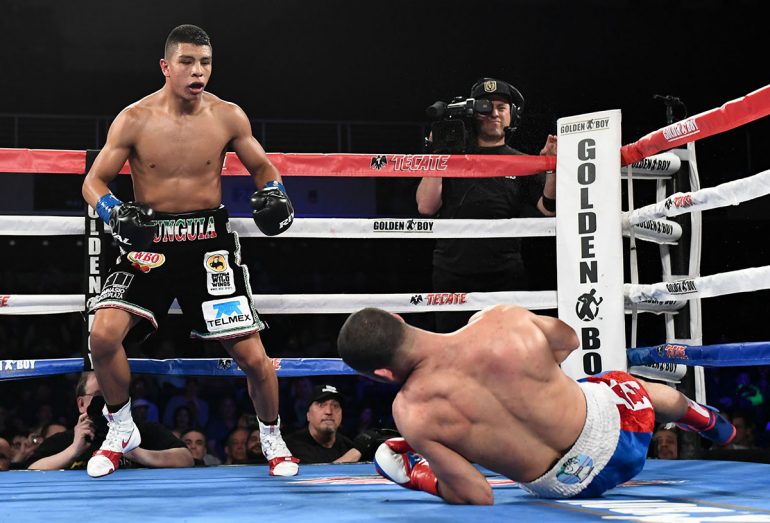 Munguia (left) chews up Ali. Photo by Matt Heasley - Hoganphotos/Golden Boy Promotions
12
May
by The Ring |

Jaime Munguia took the WBO junior middleweight title from Sadam Ali with a brutal, four-round beatdown on Saturday night at the Turning Stone Resort & Casino in Verona, New York. The bout was the headliner of an HBO “World Championship Boxing” broadcast.

Ali was defending the belt he won in what was supposed to be a retirement party for Miguel Cotto but wound up being THE RING’s 2017 Upset of the Year when Ali won a unanimous decision. The Brooklynite was attempting to show that the upset was more about him than an aging Cotto.

Munguia, meanwhile, came in attempting to justify the hype around him, including recognition as THE RING’s 2017 Prospect of the Year.

But the struggle for validation didn’t last long. The larger Munguia (29-0, 25 KOs) floored Ali (26-2, 14 KOs) with a left hook about a minute into the opening round, and a right hand scored another knockdown a minute later. A dazed Ali stumbled through the final seconds and made it to the bell.

Ali worked his way back into the fight in Round 2, but was floored again at the end of the session. It was painfully clear his speed and skills would not be enough to overcome Munguia’s power, and a corner stoppage would have been completely justified at that point. Ali’s heart was equally evident, though, and he continued to do what he could to win.

Before Round 4 there was some obvious disagreement over whether or not to let Ali come out for another round, but the ringside doctor let the fight continue. The fourth and final knockdown drew an immediate stoppage from the referee.