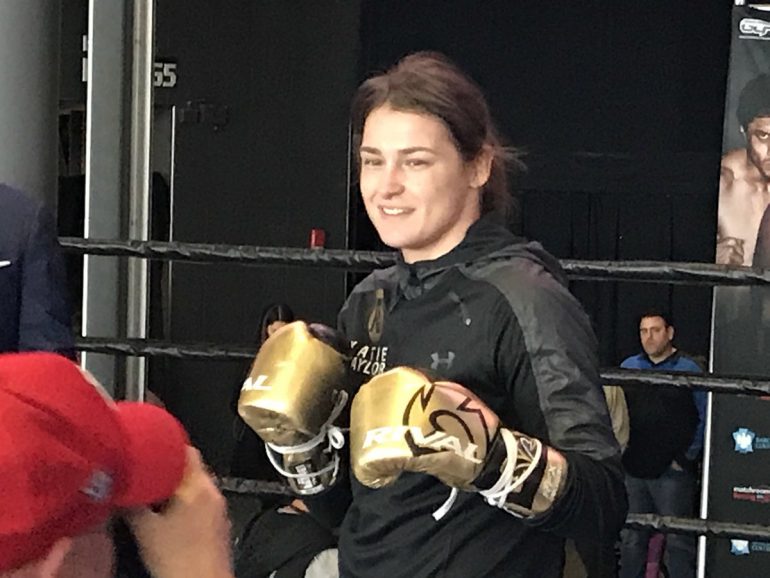 NEW YORK — Saturday night at Barclays Center, there will be a world title unification fight involving an Olympic gold medalist going up against a long-reigning beltholder. And after that, an HBO broadcast will begin.

In most instances, a fight with that sort of billing would be headlining on TV, not hiding on the untelevised portion of the card. But Katie Taylor, a 2012 gold medalist and current WBA lightweight titleholder, is a woman, and she understands that selling American networks and the public on female boxing is a gradual process she’ll have to play an active role in.

The 31-year-old from Bray, Ireland, will face Victoria Bustos, the IBF beltholder at 135 pounds, in a scheduled 10-round bout with the standard two-minute rounds. She hopes to be able to catch the attention of network executives at ringside.

“It’s great to have the opportunity to box on live TV as well so the public can see the best of women’s boxing,” said Taylor (8-0, 4 knockouts).

“I’d love to change people’s perceptions of women’s boxing. When you watch me box, I hope you just see a boxer, not a female boxer.”

If anyone is a believer in changing people’s perspectives, it’s Taylor’s promoter, Eddie Hearn. Hearn said he had seen her fight at the Olympics and was aware of her credentials as a five-time gold medalist at the World Championships, but it wasn’t until he met her that his position on women’s boxing evolved.

“I never really thought I’d get involved in women’s boxing, but Brian Peters, her manager, said, ‘You have to meet this girl.’ I watched her in the Olympics and I met her. I had never met a more focused, determined individual. Her will to win is just frightening. She’s fascinating, and I thought yeah, we’ll do this,” said Hearn, president of Matchroom Boxing and promoter of Saturday’s show, which is headlined by the Danny Jacobs-Maciej Sulecki non-title middleweight attraction.

In the United Kingdom and Ireland, Taylor is already a major sports star, and her fight will be carried live by Sky Sports. Other American networks like Showtime, which has featured two-time Olympic champion Claressa Shields in headliners, have experimented with displaying the women’s scene, which has been around for decades but received a monumental boost in legitimacy when it was included at the London Games for the first time. 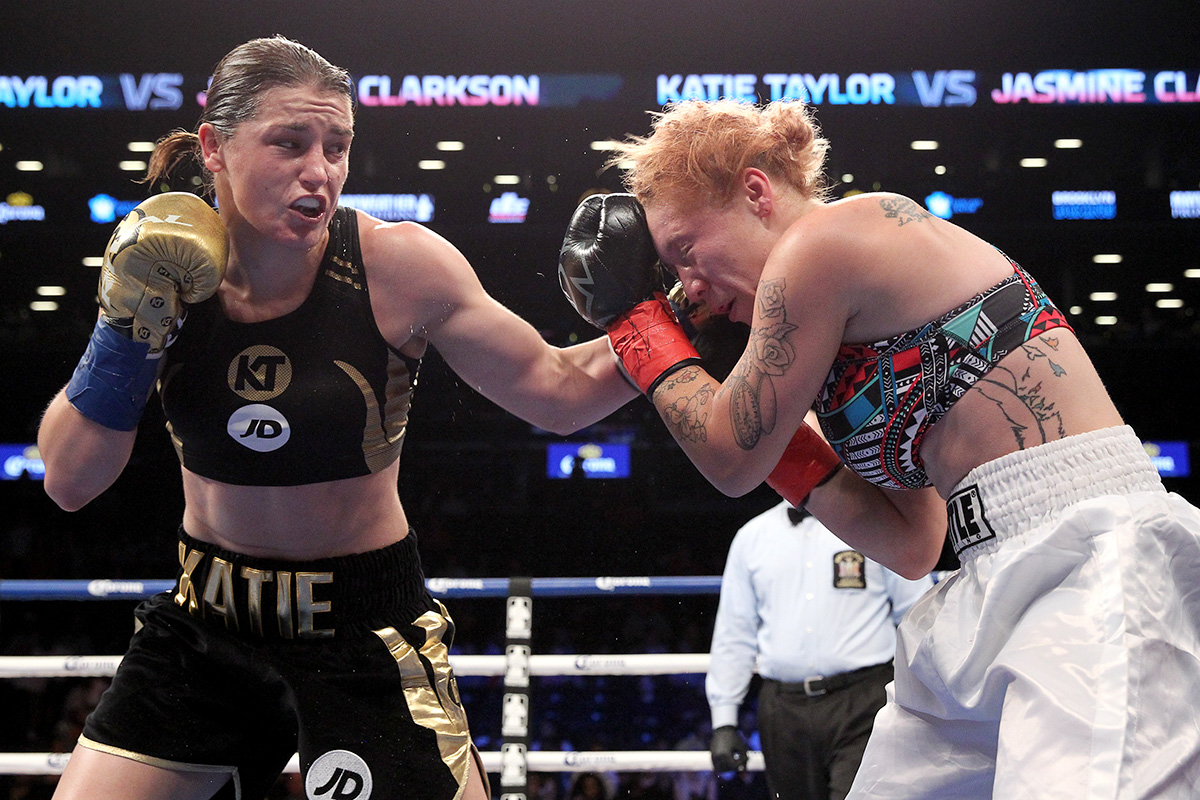 Katie Taylor (left) vs. Jasmine Clarkson, who was stopped in the third round in July 2017. (Photo by Ed Diller / DiBella Entertainment)

HBO will show highlights of her fight, Hearn says, an incremental step forward for a network which has consistently taken a “wait and see” approach to women’s boxing.

An HBO spokesperson, when asked for comment, released the following statement: “We see the growth and depth in women’s boxing and we will be opportunistic in our approach.”

Hearn is, understandably, Taylor’s biggest fan, and praises her style of fighting — doubling up on body shots, drilling uppercuts and hooks — as being “like a Mexican.” He understands the reluctance some still have in embracing women’s boxing, but takes a more nuanced approach: Yes she’s a female, but she’s one who can really fight.

“She should be on HBO this Saturday. They’re gonna show her highlights. She’s getting there,” said Hearn. “If you don’t want to show women’s boxing, OK … It is women’s boxing, but it’s that good.

“I’ll challenge any person in this arena on Saturday night: If you have any negativity towards women’s boxing, after Saturday it’ll be over. And you will follow this girl for the rest of her career.”

Taylor, who now lives in Connecticut where she trains with American coach Ross Enamait, is fighting for the second time at Barclays since she turned pro in November 2016. The promotional goal would be to make her a draw in the New York area much the way other Irish fighters have become, like John Duddy a decade ago and current work-in-progress Michael Conlan, Taylor’s Olympic teammate.

“I’d love to create a fanbase here and to be headlining shows out here as well. That would be an absolute dream for me,” said Taylor.

Against Bustos (16-4), she’ll have a good opportunity to show off her crowd-pleasing style. Bustos, who is fighting outside of Argentina for the first time, has held her title since 2013 and has gone the distance twice (once in a unanimous decision loss in 2012 and then in a failed attempt to win a title at 140 in 2016) with Erica “Pantera” Farias, one of the best female pros this decade. Unification, a rarity on the men’s side and far more so for women, would show what class of fighter she is.

“(Bustos is) a cagey girl. She hasn’t been stopped. She’s done 10 rounds nine times, so she knows how to get around the ring,” said Enamait.

“She’s a great champion,” said Taylor. “She’s one of the longest-reigning champions in women’s boxing, I believe. It’s obviously going to be a very, very tough contest, but I’m well prepared.”