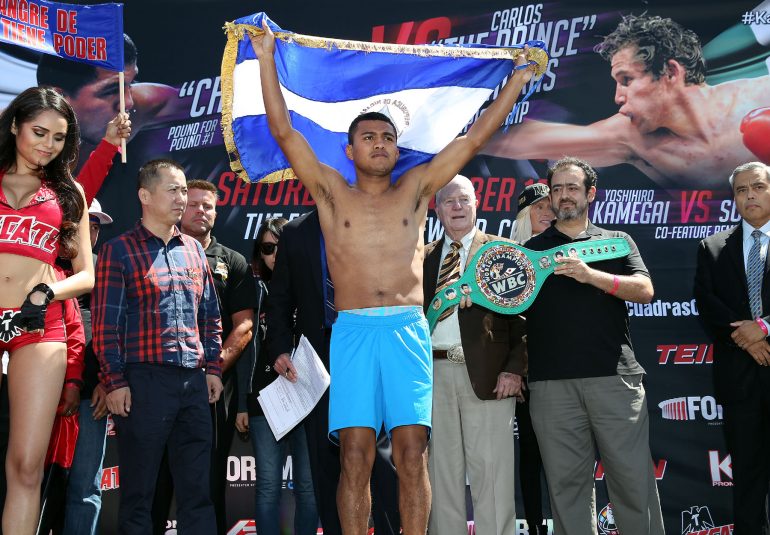 Gonzalez when he was Ring's No. 1 pound for pound rated fighter, prior to his history making showdown with Carlos Cuadras. Photo by Chris Farina - K2 Promotions
24
Apr
by Mike Coppinger

GLENDALE, Calif. — Roman Gonzalez is officially on the comeback trail.

The former pound-for-pound king is once again pairing up with Gennady Golovkin for HBO’s doubleheader on May 5 in Carson, California, at StubHub Center. Chocolatito will face former titleholder Pedro Guevara in a 10-round fight at 115 pounds, Gonzalez’s promoter, Tom Loeffler, told THE RING on Monday.

“It’s not an easy fight,” said Loeffler, who was at Glendale Fighting Club to promote the middleweight title fight between GGG and Vanes Martirosyan. “A lot of people wanted to see him come back in an easy fight, but he wanted to fight on HBO, and he realizes to be on HBO, he’s gotta fight someone who’s credible.

“Just because Chocolatito lost to Srisaket [Sor Rungvisai] doesn’t mean that he couldn’t beat everybody else in the division.”

Gonzalez is looking to extend his career, one that will undoubtedly lead him to the hall of fame. He won titles in four weight classes and did so in dominant fashion. His remarkable success led him to HBO and ushered in an era where 112-pound fighters were routinely featured on the network.

Gonzalez (46-2, 38 knockouts) was long recognized as the best fighter in the sport regardless of weight, but then he lost in consecutive outings to Sor Rungvisai last year. The Nicaraguan dropped a debated decision — and his 115-pound title — in the first bout, but in September, he was left in tatters after a devastating fourth-round knockout.

At 30 years old, in a division where fighters age more quickly, it’s unclear just how much Gonzalez has left to give. But he’s ready to prove his time at top isn’t done yet, beginning with the bout against Guevara.

The 28-year-old Mexican traveled to Japan in October to challenge Ken Shiro for a 112-pound title, but he was turned back via majority decision. Now, Guevara (30-3-1, 17 KOs) will move up three pounds for a life-changing opportunity.

“If he can beat Chocolatito on HBO, you see what happened to Srisaket [Sor Rungvisai],” Loeffler said. “He can launch his career that way.”

It’s Guevara’s HBO debut, but it’s Gonzalez everyone will be focused on. This will be the fifth time Gonzalez fights on HBO programming alongside Golovkin, once — and perhaps again — a formidable TV duo.

Time waits for no man, but Gonzalez’s legion of fans hope he has enough left for one more ride.