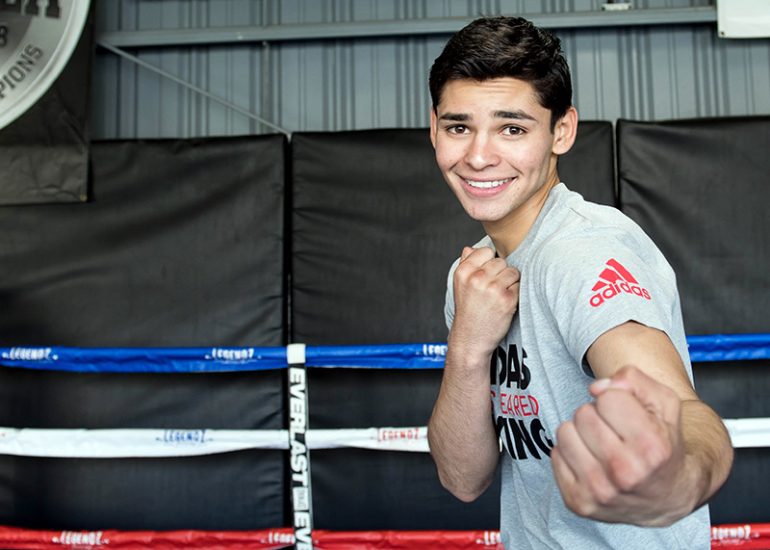 The kid is 14-0 now, 19 years old, and he has to beat admirers back with a stick if he wants to get from his house in Cali to the gym.

OK, maybe the adoration isn’t at Beatlemania level, but the fan base for Ryan “Kingry” Garcia is multiplying.

And ask the folks who saw him do his thing at Fantasy Springs Casino on March 22, topping the Golden Boy show, a lot of the seats were taken up by young ladies who were on the edge of them, leaning in and crushing on this boxer with the dimples and the boy band looks.

Oh, yeah, and with all that comes a considerable stable of haters who take delight in critiquing the young featherweight on Twitter, lampooning him for his confidence, and his re-tweeting habits, and whatever part of a skill set he’s supposedly lacking. Yes, like some of the top-profile persons in our industry, Garcia has rooters and detractors galore. He inspires a feeling in fans, be it love or hate. And as Floyd Mayweather can attest, both sides of the coin count when ticket sales are tallied…

Garcia’s three-piece setup to drop and stop 32-13-3 Fernando Vargas (age 29; from Mexico, now a loser of three straight) was much shared and discussed on social, with some lauding and others coming away unimpressed.

Me, I liked the look of the combo, delivered with clear-eyed intent and crispness. At 2:55 of the first, Garcia grabbed the NABF Junior 130-pound belt with a one-two-three, a jab-straight right-left hook collection that had Vargas too groggy to beat the count.

A one-two set the table – a jab-fake, falling short on purpose so as to maintain balance and distance to his liking, so the right follow could land – buzzing the loser slightly. Garcia saw that worked and, what the hell, went back to the well. But he pulled an extra bucket with that short left hook add-on. On his back went Vargas, and he tried to rise like he’d had a bottle too much of whiskey. The ref abbreviated the count, knowing his fighting time was up.

But not to the nitpickers, who took issue with Vargas’ arsenal … or want Garcia to climb the ladder faster, prove his worth by jumping through the hoops they deem right-sized ….

The kid has the right idea: shrugging off the naysayers and continuing to be himself. If that comes off as a tad cocky to some, well, that’s cool. He’s going to do him …

Garcia went on the Randy Gordon-Gerry Cooney Sirius/XM show “At the Fights” Monday and talked about the win. Interesting sidenote: He also talked about some of the high-level sparring he’s done. You would agree, sparring with Vasyl Lomachenko – and on another occasion Jorge Linares – qualifies as high-level, yes?

“From me sparring them, I’ll say that Linares has more of a stronger hit,” Garcia told the crew, which includes producer Josh Friedman. “He’s more solid. Lomachenko has better ring IQ. He’s more experienced obviously. Honestly, I don’t know who I’d pick there,” he continued, referencing their May 12 face-off in NYC. “Linares is bigger than him. Lomachenko doesn’t really have power from what I’ve seen and felt. When he puts them together you can feel them, but they’re not really scary. Linares has some pop, so I don’t know – it could be going either way depending on how Linares’ conditioning holds up through the later rounds and if he can stick to the gameplan and not get worn out mentally. Then I would give it to Linares. But if he does (get worn out), then I would obviously give it to Lomachenko based on experience.”

For the record, the kid is promoted by Golden Boy, same as Linares, while Loma is a Top Rank boxer.

My three cents: Kid is savvy – media savvy, PR-savvy – to go along with above-average handspeed and pop. I see a fine, fine future ahead, and won’t hold out a reservation of “let’s see how it plays out.” He’s the goods. And as for his course, I trust Eric Gomez and Roberto Diaz to know the proper pace of his ascent. These two are now on par with the Top Rank boys, arguably, in knowing proper elevation timing.

Listen to Woods’ 100th episode of his “Talkbox” podcast on the Everlast platform.