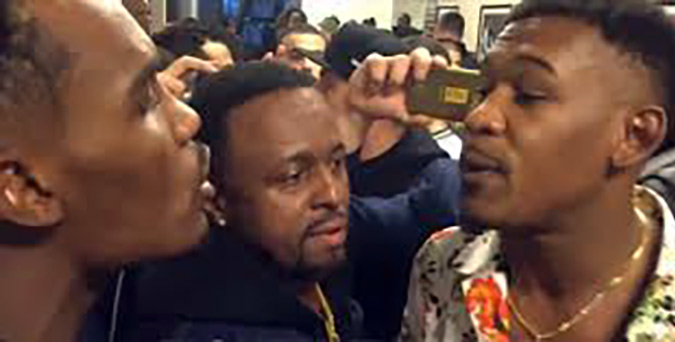 NEW YORK — Middleweight contender Jermall Charlo asked and in fact received right quick on Saturday, when backstage at Barclays Center he said he was looking for Danny Jacobs, the 160-pound ace who grew up in nearby Brownsville…and then voila!

Charlo had been booked to fight Hugo Centeno on Saturday night, March 3, at Barclays, the chief support bout to the Deontay Wilder versus Luis Ortiz heavyweight tango. But two weeks ago Centeno broke a rib in training, so their match was postponed. Charlo still made the trek from Texas to BK, and chatted with videographers backstage.

Charlo, the “larger” of the identical twins, made the jump from 154 pounds to 160 and is wanting stiff challenges. He joked that he’d be pulling a Shannon Briggs, and go stalking Jacobs, who in fact has a date booked in the same building, April 28 against Maciej Sulecki. “Let’s skip the Centeno fight,” said Charlo, who holds a 26-0 mark. He said Jacobs could ditch Sulecki and the two men could “get right to the bag.”

He continued, saying he’d fight on HBO, he’d go to the U.K., whatever needed to be done to get ‘er done…

And just then guess who appeared. Grinning, striding confidently, rockin’ a summer-style tropical print top, Jacobs stopped on a dime, laid eyes on Charlo and started in. “Whew, I came at the perfect tiiime!”

They did cross chatter, and then Jacobs said, “I’m just figurin’ out what we doin’? We gonna play back and forth?” He referenced some back and forth on social media, between the Texan and him.

Jacobs asked why Charlo said he ducked him, Charlo said he didn’t say that, and they went tit for tat as posse members also bantered, with Jacobs noting that he’s risen to a place where he’s earning hefty checks and respect from HBO as a build-around talent. Cooler heads prevailed and Jacobs went on his way.

Let’s keep an eye on this. No way Jacobs isn’t going ahead with his April 28th date. Jermall vs Centeno is re-booked for April 21. Maybe then we get the Texas versus BK mashup?

Keith Connolly manages Jacobs; he told THE RING that, “If they both win this spring Danny will 100% be interested in fighting Charlo. But it takes two to make a fight and we know now after last nights’ confrontation that what he says to the cameras is one thing but when he is confronted with actually being offered the fight I highly doubt he takes it … but I hope I am wrong ’cause Jacobs-Charlo would be a huge event at the Barclays.

“I respect Charlo as a fighter, I think he’s a great talent but Danny is at his best when he’s backed into a corner when people are picking against him like in the Quillin and GGG fights. A cornered Danny Jacobs is the most dangerous Danny Jacobs, so all the talk and all the hype that Charlo will be bringing will get Danny to be at his best!”