Manny Pacquiao not fighting on April 14 due to IRS issues, Bob Arum says 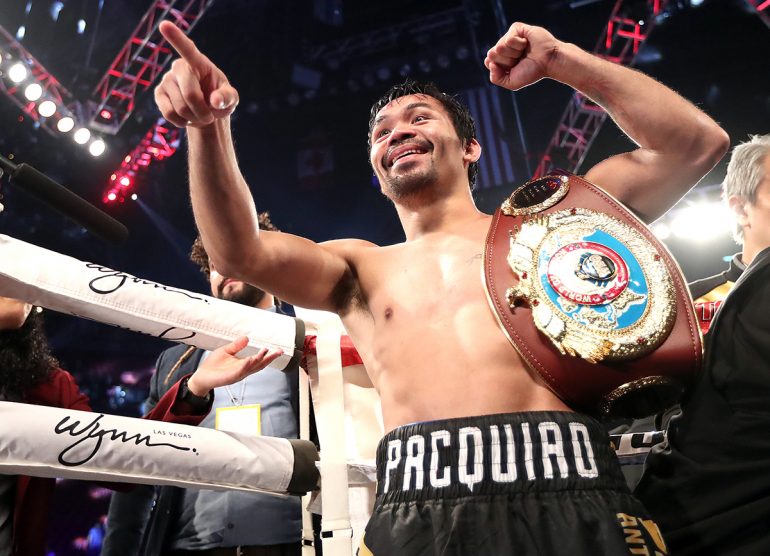 NORWALK, Calif. — Manny Pacquiao was slated to return for the first time since his controversial loss to Jeff Horn with an April 14 bout against Mike Alvarado.

The welterweight fight was set to serve as the ESPN Pay-Per-View co-feature to Terence Crawford’s title challenge of Horn in Las Vegas, but it’s now off, and when Pacquiao fights next is anyone’s guess.

The Filipino senator’s media manager, Aquiles Zonio, told RingTV.com earlier this week that Pacquiao was insulted to fight in a co-feature, and that was why the fight wouldn’t happen.

Not the case, says the future hall of famer’s longtime promoter, Bob Arum.

“Pacquiao is moving off the date for now, there was a problem with Pacquiao and the IRS and all that stuff,” Arum said.

Pacquiao, of course, has had repeated issues with the tax man. He owed $68 million as of 2016, and over the years, he’s gone to great lengths to minimize the money he owes.

All of Pacquiao’s high-profile bouts have taken place in Nevada and Texas, where there’s no state income tax, and recently, Pacman has split his training camps between his native Philippines and Hollywood to avoid further taxation.

The eight-division champion’s last bout took place in Australia, and he hasn’t fought in the U.S. since November 2016.

When Pacquiao will fight again, if he does at all, is unclear. Arum told RingTV.com last week that he planned to match Pacquiao with either Crawford or Vasyl Lomachenko in the fall, but that was when Pacman was still slated to meet Alvarado.

With our without Pacquiao, Top Rank is moving forward with Crawford-Horn on April 14 in Las Vegas. Whether it will still land on PPV without the support of Pacquiao, Arum wouldn’t say.