Andrew Moloney: ‘I truly believe I can beat these top-level guys (at 115 pounds)’ 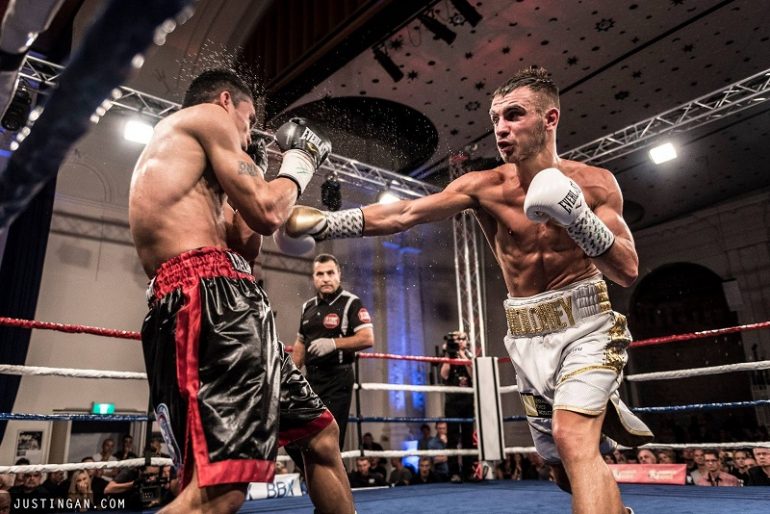 On Saturday, SuperFly 2 took place on HBO at the Forum, Inglewood, California. It was a boxing nerd’s cornucopia, four well-matched fights that delivered in different ways.

However it wasn’t the only weekend action at 115 pounds. On the other side of the world, emerging junior bantamweight Andrew Moloney bested world-rated Rene Dacquel by a wide unanimous decision.

It was arguably Moloney’s best performance to date. That said, he’s not sitting on his laurels and knows he must continue to work hard to make his mark in the talent-laden division.

“I am very happy to have gone the 12-round distance for the first time in my career,” Moloney (16-0, 10 knockouts) told RingTV.com on Monday. “It gives me great confidence for future fights, as the fight was fought at a high pace and I didn’t tire at all. I still felt very fresh at the end of the fight.

“I am happy with the victory, and happy that I beat a very well-rated fighter, but I do know that there was a lot of things I could have done better during the fight. This was a great learning fight for me and I know I will improve a lot from this fight. I look forward to sitting down with my coach Angelo (Hyder) in the next few days and analyzing what we can improve on for future fights.”

Several hours after his win, Moloney sat with his twin brother Jason – an unbeaten bantamweight who also won his fight on Saturday – and coach and watched the much anticipated second offering of SuperFly.

Like everyone else, the brothers and their team were enthralled.

“The super flyweight (junior bantamweight) division is a very exciting division at the moment,” said Andrew. “I gained a lot of confidence in myself after watching the SuperFly 2 card on the weekend.

“I truly believe I can beat these top-level guys. I have seen there is already talks of a ‘SuperFly 3’ card taking place later this year. I really hope I can fight on this card and introduce myself to the boxing fans around the world.”

Moloney didn’t pick up any injuries from his fight and will have this week off before returning to the gym next week.

There is no luxury for his management team. Tony Tolj is busy over the course of the next few weeks with other fighters from his stable but hopes his charge’s win doesn’t go unnoticed by SuperFly promoter Tom Loeffler of 360 Promotions and HBO’s Peter Nelson.

“It’s was Andrew’s biggest test to date and it he passed with flying colors against the IBF number 5, WBC number 10 Rene Dacquel,” said the venerable manager.

“We are looking to climb the ladder. ‘The Monster’ is ready for all the world champions. We want the WBA junior bantamweight champion Khalid Yafai. Australia vs. England, it sells itself. Maybe for SuperFly 3?”