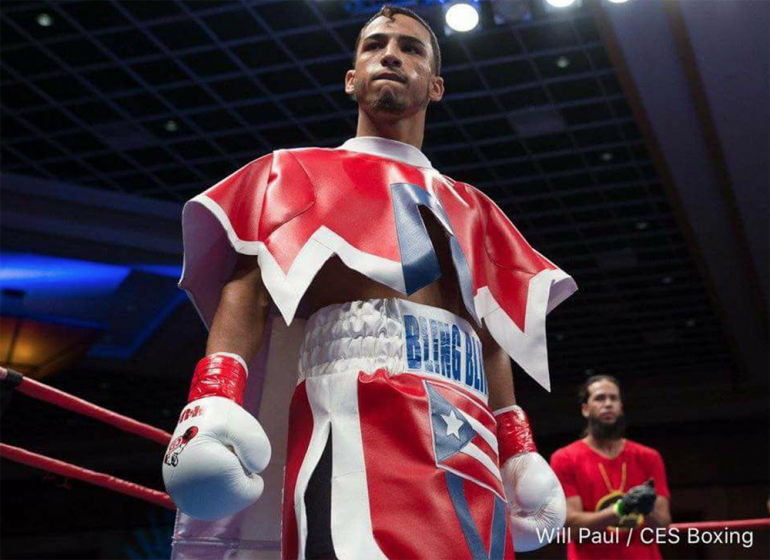 In my third decade of coverage of the sweet and savage science, I didn’t think I’d seen it all, because — duh — boxing is the theater of the unexpected, and new and noteworthy and bizarre and beautiful occurrences are simply inevitable within this arena that boasts a low-ish barrier to entry and a rich history of welcoming rebels and iconoclasts.

But what I saw on Friday night at the Twin River Casino in Lincoln, Rhode Island, while doing blow-by-blow for the Facebook Fightnight Live stream, for CES Boxing and Linacre Media, well, I think now maybe I’ve seen it all.

Michael Valentin, from Providence, Rhode Island, took a 3-0 record into the ring with him against 2-4 Demetrius Wilson, who’d lost his first four but, bless his soul, showed admirable stubbornness and soldiered on, winning his last two. Rhode Island against St. Louis, we saw Valentin, nickname “Bling Bling,” attired in a flashy get-up, conjure memories of Hector Camacho as he marched to the ring. A Jheri curl hanging down to announce “Macho Time” is still a thing.

Round 1 the curl got stung with a right uppercut, and down went Valentin. In Round 2, V moved his feet smartly, now properly respecting Wilson’s power. The Rhodie stabbed the jab, tightened up the D, and this frame was pretty even-Steven. In the third, watchers, who included John A. Gotti, whose son John Gotti III fights for the CES MMA branch, saw “Bling Bling” avoid the right uppercut, now knowing it was something that was in play. V’s left hook stung Wilson up high, and then a combo — right to the body and left to the body — hurt the out-of-towner. Wilson took to his knees with 1:30 left, and then survived to the bell. In the fourth, they banged in closer quarters, with Valentin showing a cardio edge, his energy level of a higher caliber. Valentin worked hard in the fourth and final round … and then both men waited for tabulations and the announcement of the winner.

And then came the new entry in the big book of unexpecteds — the boxing compilation version: Valentin took the mic from Palazio and said he’d be taking a break from the ring.

“All my life I dealt with adversity, and …” Valentin said, choking up, hesitating, wondering if he should make this leap, “… this fight, I always fought with a colostomy bag. Anybody that thinks I’m lying, look at me, I got a colostomy bag.”

With his left hand he pulled down his trunks to reveal, indeed, a bag pressed against the lower right side of his abdomen. As a newborn, a surgeon removed a portion of his colon and attached the remaining tissue to the outside of his body. A hole, aka a “stoma,” in the abdominal wall allows waste to leave his body, and a bag attaches to the stoma to collect the fecal waste. And yes, he’d been wearing that bag during his fights, because he’d been born with Hirschsprung’s disease, a birth defect found in one in 5,000 newborns, in which nerves are missing from parts of the intestine.

“I’m a fuckin’ fighter,” said the 18-year-old, who boasts of Puerto Rican and Italian blood, as he spun around in center ring, telling everyone in that joint that he wasn’t put off by a medical condition — and that they didn’t have to be either, whatever limitations they might be putting on themselves. “After this fight, I’ll be going to surgery, I’ll be out for about eight months, nine months to recover. I’ll be back and I’ll be strong and ready to fight. I’ll be ready to fight anybody, I’m a fuckin’ warrior!”

Valentin came to the booth and joined me and analyst Xavier Porter a bit later. He shared that he’d been bullied in the schoolyard because of his condition, but that didn’t cause him to surrender his dream to fight. “That just makes me stronger as an adult,” he said, noting that his surgery will take place in April. The surgery will render his intestines fully functional, and he will no longer need a colostomy bag, he stated.

Valentin told us that he’s all-in, as a fighter. “I dropped out of school for this,” he said.

He also revealed that the local athletic oversight commission suspended him after the fight, because he hadn’t revealed he was wearing the bag. Valentin took issue with the suspension—“I’m kinda mad right now”— sharing that he had a letter from his surgeon attesting to his fitness to compete. Like we said, boxing has traditionally welcomed rebels, but that doesn’t mean rebellion is not always embraced universally.

My three cents: Pure props to this kid, and he is a kid, c’mon, he’s 18. I look around right now and I see him taking this stance, and students in Florida proving to be composed and righteous communicators for their cause, and it leaves me — and I hope you — feeling a little bit better regarding the fate of the planet.