Igor Mikhalkin is unknown…but will he over-deliver on March 3? 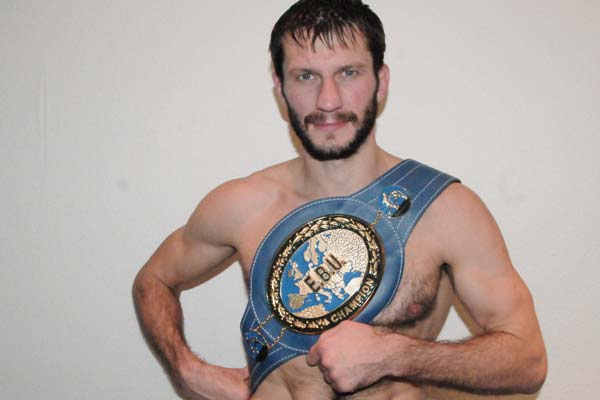 Go on; admit it. There’s zero shame in it; I’m right there with you.

You and I know nothing or next to nothing about the guy who is fighting Sergey Kovalev, on March 3, at Madison Square Garden’s Theater, for “Krusher’s” WBO light heavyweight crown.

You might know the name, Igor Mikhalkin, and not that much else, beyond what BoxRec.com tells you.

He’s 32 years old, was born in Russia, lives in Germany, is a left-hander and has never fought in the United States. Mikhalkin’s most recent bout unfolded in France and, in the fight before, he fought and beat a “name,” Thomas Oosthuizen in Hamburg. Before that, he fought and beat some 8-6 dude in Sweden.

In his 12th fight, BoxRec informs us, Mikhalkin (21-1, 9 knockouts), a former European champion, lost for the first and, to this point, only time to Aleksy Kuziemski, then 18-1. So he stepped up and slipped but that was in 2010, so we maybe shouldn’t read all that much into it.

But let’s put it on the table…We are hopeful that this mystery man challenging Kovalev will indeed be able to challenge him. Is there any video out there to help us form an opinion on Mikhlakin’s chops? Indeed there is. Happily the internet age means that fights are recorded and available for us to see, oftentimes, even if they took place halfway across the planet.

… we see a Mikhalkin who looks composed in battle and like he has the basics down pretty solidly. He keeps his hands up, moves his torso and head often enough not to be a sitting target, keeps the feet moving, so he’s not ultra easy to get a bead on. His power looks like his KO ratio implies; Mikhalkin is no bomber. Will he punch hard enough to hurt or even bother Kovalev? I’m thinking maybe not but only time will tell.

That’s the point I made to the promoter of the March 3 card at MSG Theater, Kathy Duva of Main Events, when she was a guest on the Everlast “Talkbox” podcast:

We talked about how one of the great things about our sport is that an “unknown” can come to the U.S. and make a big damn splash. Boxing is an endeavor that offers opportunity to the have-nots, rewards merit and hard work. Not long ago, on HBO, we had another situation in which a guy seen as an unknown here in the U.S., a Thai fighter, Tewa Kiram, was offered a spot on a grand stage. He met Lucas Matthysse, in California, and no, he didn’t exactly rise to the occasion. (He got dropped and stopped and there was chatter that it looked like he took a dive). Now is it a coincidence that both of these “opportunities,” for Kiram and now Mikhalkin, are taking place on fights shown on HBO? Likely not. HBO’s budget has been reduced mightily from the 1990s to the 2000s to now. Budget limitations and the new economical certainty of only A-sides getting a premium compensation (because B-sides don’t move the needle) mean we now see more unknowns getting their shots. By the way, this isn’t just limited to within the boxing sphere. Labor is, by and large, interchangeable unless a premium reward is available for a premium talent, which moves the needle i.e. makes the company a prettier penny.

Duva thinks Mikhalkin will deliver and make for a better challenge than the one offered by Kovalev’s last challenger. Vyachelsav Shabranskyy talked the right game coming into his November 25 title shot against Kovalev, in New York City, but his chin had the last say. Ouch, the chin said. I’m out, in round two.

Mikhalkin is a solid pugilist, Duva told us, so she thinks this fight might have more back-and-forth than the Shabranskyy bout. Mikhalkin himself offered up, in press materials given to boxing journos, more about where he came from and what we might see on March 3.

“It has to do with the Russian way of life, our discipline. Russian fighters, in general, always have a big heart and a big will to win. We strive for the best. This willingness to win is why so many Russians are fighting on March 3,” said Mikhalkin, who was born near Siberia.

Mikhalkin told us he’s well acquainted with Kovalev (31-2-1, 27 KOs). “I didn’t think until recently it was possible but the way my career and Sergey’s career were moving, it was inevitable we would have to fight each other. It’s destiny we would see each other in a boxing ring,” said Mikhalkin. They trained side by side, two decades ago, in the amateur sphere. “What I remember of Sergey from those days, he was always working and training really hard and doing his job as a boxer. Since then, I’ve seen every one of his fights and I respect him for what he has done.”

What would a win over Kovalev mean for Mikhalkin? “I’m not as well-known but I get to fight a very popular opponent, a very dangerous opponent, with lots of fans. It would change everything in my life. For me, this is a once-in-a-lifetime thing,” he continued. “Even though I am not well-known, I don’t think Sergey will take this as an easy fight. He’s not underestimating who Igor is, as a not-so-well-known name.”

Now is this next tidbit a tiny tell? Mikhalkin’s father and brother were professional boxers and will be watching. “They are proud of me. I have a great opportunity. They are a bit worried for me and are giving me all their support,” he said. Have they given him any advice? With a laugh, Mikhalkin said, “What they said was, ‘Train well; train hard. Do things the right way.'”

“They are a bit worried for me…”? Hmmmm…

Like so many fighters, Mikhalkin is motivated by a higher power. His three-year-old son Makar will also be on his mind. “Things changed in my life when my son was born. It’s great motivation. I started to value things differently. I will do anything for my son to provide for him and give him a great life,” said Mikhalkin.

He is aware that, because he’s not a known quality here, cynics might assume he’s not A-grade. “When it comes to my boxing style, it doesn’t matter what I say now. It’s better to see me fight. On March 3rd, people in New York and America will see what I’m made of, as a boxer. All you need to know about me is that I’m a good person,” he said.

My three cents: Noted, Mr. Mikhalkin. Perhaps even more salient to us is if you aren’t a good person. We hope you are a good fighter and, specifically on this night, great. Boxing is the theater of the unexpected and so much of that designation stems from the track record of unknowns over-delivering. As a fan of those occasions, I’m hoping it happens again on March 3.