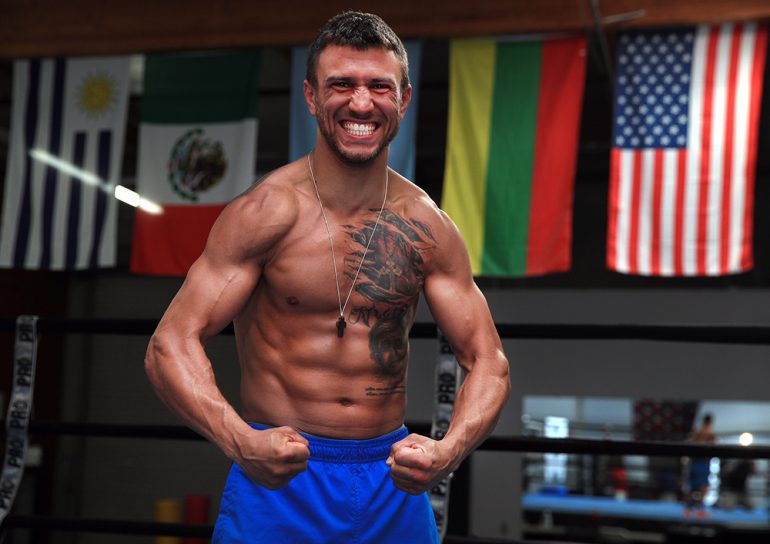 Jorge Linares may not share a ring with Vasyl Lomachenko after all.

The fighters have playfully traded barbs on social media for weeks ahead of a planned May 12 clash for Linares’ RING/WBA lightweight championship at Madison Square Garden, but that very date threatens to thwart the ESPN show.

Top Rank’s Bob Arum told RingTV.com on Thursday that he and Linares’ co-promoter, Akihiko Honda of Teiken Promotions, agreed to financial terms for the highly anticipated clash. The problem is that Linares’ American promoter, Golden Boy, will televise the Canelo Alvarez-Gennady Golovkin rematch replay on HBO that night.

Arum said that Lomachenko (10-1, 8 knockouts) is making his 135-pound debut on that date, with or without Linares, and that if they can’t figure it out by Monday or Tuesday, they’ll move ahead and try to match the two-time Olympic gold medalist with the winner of Friday’s lightweight title bout between Ray Beltran and Paulus Moses.

“[Golden Boy] always knew about the date so this is the pressure they’re getting from [HBO Sports boss] Peter Nelson,” Arum said in frustration. “When you guys [the media] talk about going across the street, going to other promoters and making fights, which makes all the sense in the world, these network executives, particularly a guy like Nelson, will always look for a way to block it.

“They knew that May 12 we reserved The Garden. It’s a very important date for ESPN because it comes in the middle of the [NBA] playoffs, so ESPN says the fight will do over 2 million viewers. And these guys blocked it. [WBA president] Gilberto Mendoza’s furious. The kid [Linares] is furious. But [Golden Boy’s] playing patsy for Nelson and we’ll go with the winner of the fight tomorrow night against Lomachenko.

“The kid wants it, the WBA wants it, Honda wants it, everybody wants it except Peter Nelson, who’s preventing Golden Boy from doing it on that date.”

An HBO Sports spokesperson denied the allegation in a statement obtained by RingTV.com:

“Golden Boy and HBO have long been in talks for a live event on May 12, though Jorge Linares had not been mentioned. We have never stood in the way of Jorge fighting on that date or any other. In fact, we look forward to Golden Boy offering a fight to us in accordance with our rights to Linares’ next fight. So far, no offer has been made to us.”

Arum says that live event is Sadam Ali, in his first junior middleweight title defense after beating Miguel Cotto, which will be paired with the Canelo-GGG replay. “That’s their programming,” Arum said, “it’s awful.”

Linares (44-3, 27 KOs) successfully defended his 135-pound championship with a wide-points victory over Mercito Gesta last month. After the fight, talk immediately turned to Lomachenko, who rules over the 130-pound division but will soon seek a title in a third weight class.

The Ukrainian southpaw is THE RING’s No. 3 pound-for-pound fighter and the 29-year-old cemented his status with a stoppage of Guillermo Rigondeaux in December. A win over Linares in a new weight class would further prove his dominance, but it’s not looking good, although Golden Boy says they want to make it work.

“We know of no bylaw, Ukrainian holiday or ‘magic day’ in the words of Bob Arum that mandates that Vasyl Lomachenko can only fight on one day during the spring and summer month — May 12th. While Jorge Linares is happy to fight on any other date of the calendar, if Vasyl Lomachenko absolutely, positively must fight on the 12th, we have a solution.

“HBO is willing to pay more for the fight than is currently being offered. And they would do it on May 12th. So, Vasyl Lomachenko has three options. 1. Fight on May 12th on HBO, 2. Fight on any other day on the calendar, 3. Walk away from the fight all fans of the sport want to see. I am hopeful he chooses one of the first two.”

And that’s not going to happen. Top Rank can only promote shows on ESPN, which reaches far more homes than HBO. It appears this stalemate is nowhere near a resolution, so Lomachenko will have to watch ESPN with a watchful eye toward his potential May 12 opponent.

“We can’t move off the date, the whole key to paying all this money was because of the date [and the lead-in from the NBA playoffs],” Arum said. “With Lomachenko we will have a huge audience, more money for them selling commercials and all that good stuff.

“I thought somebody was joking, I mean what difference does it make to Golden Boy that we’re doing a fight the same day they’re doing a delay of Golovkin and Canelo? They already have the money [by that point] on the pay-per-view for Golovkin and Canelo. Now if we were doing it on May 5, I mean, I could see a major problem. But this is a week after their pay-per-view. And ours isn’t pay-per-view, it’s free.”

Golden Boy Promotions president Eric Gomez denied that Nelson is leaning on the company to stay off the date. He believes Linares-Lomachenko is one of the best fights that can be made in boxing and he wants to get it done. However, Gomez acknowledged that HBO “dates are gold” and he’s going to pass up an opportunity to showcase his fighters on the network.

“We’re very good partners [with HBO], it’s not good business to go against yourself,” Gomez said. “Let’s pick another date and let’s do it. He should go to ESPN and say give us the 19th or give us the 26th of May or the first weekend of June.

“We’re not tied down to any network with Linares. We are flexible and we really want to make this fight. It looks like [Arum’s] the one that has the restrictions. It sounds to me like he’s killing it. They’re saying it’s an important date for the NBA Playoffs, they go on for a month-and-a-half.

“I have the feeling that Arum already has everything all predetermined and he’s waiting for Beltran to win so he can do Lomachenko and Beltran. He’s using Linares’ name and he’s picking on HBO and he’s trying to get Peter Nelson fired.”