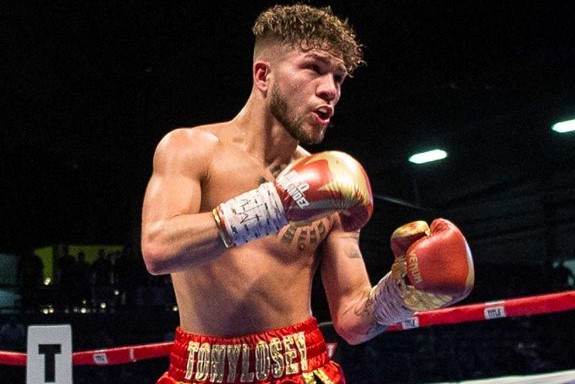 Best night of pro career and why: After fighting in a hostile environment at the Rio 2016 Olympics, it was pleasing for Hernandez to fight at home in his professional debut. A crowd of over 3,000 cheered him on. The fight headlined on CBS Sports Network.

“It was the first time people were cheering for me instead of against me,” Hernandez told RingTV.com. “All the American boxers were booed at the Olympics, so it was a treat for me to fight at home to the cheers of my fans.”

Worst night of pro career and why: “My last fight (against Kendrick Latchman),” Hernandez said. “Two opponents backed out, and I had to fight someone much heavier. My coaches never had a chance to study him.

“We did quick adapting to the challenging situation. Going the distance didn’t matter, because all that was important was coming out with a win like we did.”

Next fight: Hernandez begins his 2018 campaign against Jozsef Ajtai (19-9, 12 KOs) at the Hartman Arena, Park City, on Saturday. The two had been scheduled to meet late last year but Hernandez suffered an injury in training.

“I’m blessed to have this opportunity so quick and I can’t wait to get the job done.” he said ahead of his first eight-round contest.

Ajtbai, 21, is a former national champion at junior flyweight. The young Hungarian-born fighter started his career with 10 wins, however, he has lost five of his last six outings. Those defeats have mostly come against quality opposition: Andrew Selby (L TKO 2), Zou Shiming (L UD 10), Kal Yafai (L TKO 1) and Artem Dalakian (L TKO 3). Hernandez is a big favorite over Ajtbai, but it will be interesting to see how his performance compares.

Why he’s a prospect: Hernandez was a very good amateur at domestic and international level.

He is an eight-time Ringside champion and became the first fighter ever to win six consecutive Silver Gloves titles. He also won the 2014 Golden Gloves tournament, the USA Youth National Championship and a host of other amateur accolades.

The 22-year-old boxer-puncher also represented America at the 2015 World Championships but lost in the first round. That experience served him well, as he won bronze at the 2016 Olympics; his biggest achievement in the unpaid ranks. Hernandez would lose to eventual gold medallist Hasanbay Dusmatov, who also won the Val Barker Trophy for best boxer.

Prior to turning professional, the Wichita-native also fought for the “USA Knockouts” in the World Series of Boxing.

In the lighter weight classes boxers tend to progress quicker and at a younger age. With that in mind, despite having had only three professional fights, Hernandez already has his eye on the prize.

“I feel I’m not too far away right now,” he said. “I could compete at the top level right now.”

Kay Koroma worked with Hernandez when he was on the Olympic team and has known him since he was 10 years old.

“Nico has a big heart and will never give up,” said Koroma. “He has a bag full of talent. His determination will not let him settle for anything less. He has a way to win, no matter the person in front of him. He can box and be aggressive if he likes. He’s a great kid to be around.”

The working plan is for Hernandez and his team to build Wichita into something similar to what Terence Crawford has with Omaha, Nebraska. Although Wichita has no real boxing background, the former Olympian is already popular and sells between 1,500 and 3,000 tickets per fight. He has been the headliner each time he’s performed so far.

Why he’s a suspect: The flyweight division isn’t a popular division in North America. There are only eight active 112-pound boxers listed on Boxrec and, as Team Hernandez out last time, when you require a change of opponent, there aren’t many options.

This time, his team have elected to pay for a fighter to fly in from abroad, which isn’t ideal in a weight class not associated with big money.

That said, Brian Viloria, a former 2000 Olympian, has enjoyed a successful pro career and should be something of a blueprint.

Hernandez was glad to return home and fight in front of his hometown fans, but that might not always be possible. As his career progresses, he may want to align himself with a big-name promoter. Without one, he may have to travel for big opportunities.

Koroma isn’t sure what weaknesses his former pupil has at this stage.

“Right now, it’s hard to say,” he stated. “The reason is, he’s starting a new chapter in the pros. Maybe not using his mind sometimes. But that’s where his father comes into play; he’s a very good coach. When Nico drifts off, he brings Nico back, if he gets off his game plan.”

Storylines: Hernandez grew up in Wichita. His family were poor and his father worked a lot. The future Olympic medalist was initially a good wrestler and cross-country runner, but he was never far from trouble.

“I had street fights growing up and when I was nine, I told my dad that I wanted to box,” he said. “We saw my uncle Pat, who was a boxing coach, at church and my father told him I wanted to learn to box. The next day he picked me up and we started to train.”

From that day onwards, Hernandez didn’t look back.

He boxed while he attended North High school, alongside his good friend, Tony Losey, an aspiring welterweight. Both competed alongside each other and captured junior Olympic gold medals.

The pair had hoped to fight for the US team in Rio 2016, but, tragically, Losey lost his life in an industrial accident in 2014. Hernandez fights in honor of his friend’s memory.

The gym the Hernandez’s owned burned down before Hernandez debuted. For that fight, his team put boxing equipment in a bedroom and that is where he worked out. They now have a new gym that his father runs.

Hernandez works with his father as a lube tech in Wichita for a trucking company. His favorite boxer is Vasyl Lomachenko. Away from boxing, he enjoys spending time with his family and friends.