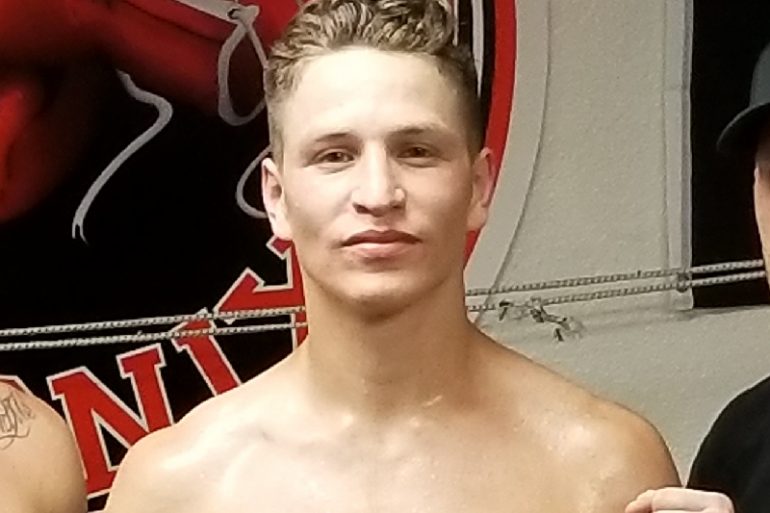 The California featherweight battled Jose Haro, in Iowa, and took the worst of it, in a 10-round clash. Haro landed hard and clean on Franco, whom went down. He struggled to stand after getting knocked to the mat, did so, fought on, and was felled again. The second knockdown was nasty, vicious, but we didn’t know at the time just how much so. Referee Celestino Ruiz waved off the count and the fight was over. Franco sat on a stool, conversed quickly with Haro. Then symptoms started setting in…

His career was over; his record stood for all time at 16-2-3 (with 11 knockouts). The trauma inflicted upon his brain sent him into a medical danger zone from which he very nearly didn’t escape. But escape he did; after five brain surgeries, this miracle man, on Monday, woke up at 5 a.m., and joined his brothers for a bit of a boxing workout at their dad’s gym. He is still, totally, a fighter.

The 26-year-old joined the Everlast podcast “Talkbox” on the phone, Tuesday, and filled us in on his life today, on how he looks back at that fight with Haro and if there’s been any forward movement on his quest to get promoter RocNation Sports to help out with the mass of medical bills he and his family now face.

“I remember nothing. I remember nothing of the fight. I remember nothing of the night of the fight,” Daniel shared with us, graciously. “It’s like a big chunk of my life is just gone, especially those few months that I was in Iowa, rehabilitating and being in the hospital there. I really don’t remember a lot of it. I recall some things about my therapy but I remember waking up in the hospital; that’s it. Like, ‘What happened?’ Somebody, one of my friends told me what happened and I wanted to see it. So I watched it on YouTube, just like a highlight of it, and I was like, ‘Wow, that’s crazy.’ Still now, no recollection, no flashbacks or anything. It’s all fake news! Now that I think about it, I kind of don’t want to watch it anymore. I don’t want to see it again. But it really did help me to realize, I know what happened, and it didn’t look that bad…but I am in this position. I think it helped me move forward, get a foot behind me and then I could start to push forward.”

He said that he’d like to start a foundation, to help fighters and athletes, should they fall into dire straits like he did. He’d like a back-up plan, a softer cushion to land on for people like him.

“I boxed with my brothers (Monday) morning. I shared our pastime,” he told us. “It was amazing just to be in the boxing gym again, with my two brothers (Mike and Nick), who I’ve grown up with and love so much…It’s been amazing. I even worked the mitts with my dad (Al) on Sunday. After church, I went to the boxing gym and had a chance to work mitts with my dad. He was almost crying. He didn’t want to cry, didn’t want to make me feel bad, but you could see it in his face.”

The bills though…they still remain. Piles upon piles. “They’re still high bills. I’ve never gotten as much mail as I have in my entire mail. I hate checking the mail now!…I think God has a plan and, through our struggles, we’ll get something going in the right direction.”

Has he heard from Jay Z and RocNation?

“No, I haven’t heard from Jay Z or Beyonce. One of my friends has links to a lot of celebs and I heard that Jay Z and Beyonce actually know about it and actually talked about it.”

He’s hopeful that now that the bigwigs possibly know, they will act on that knowledge. We can all hope. Jay Z is a billionaire and can wave a wand and make the medical bills disappear. We can hope.

Here is Daniel’s GoFundMe page, which can help lighten the load, until Jay Z does the right thing and whips out his checkbook.