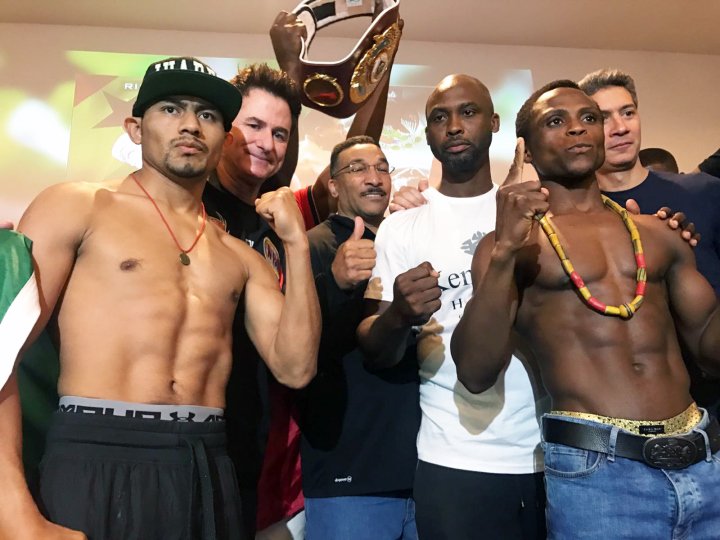 Remember the fourth installment of Manny Pacquiao and Juan Manuel Marquez? When a fighter goes all-out for a knockout, they risk the possibility of one coming back at them.

Junior featherweight contender Cesar Juarez was so concerned about fighting in Isaac Dogboe’s home city that he left his defense in the locker room and, as a result, succumbed to a fifth-round stoppage at the Bukom Boxing Arena in Accra, Ghana, on Saturday. The official time was 2:12.

The unbeaten Dogboe, who was rated No. 10 by THE RING at 122 pounds coming in, survived an early storm before decking Juarez in the second round. The Mexican power-puncher survived and came back blazing but Dogboe was merely biding his time.

Late in the fifth, a pulverizing left hook lead landed flush and Juarez fell straight back to the canvas like a man hitting his bed after a rough day at the office. Badly hurt, the stricken fighter somehow managed to find his feet but referee Tony Weeks called a halt to the action and the home crowd erupted into a frenzy.

This victory saw Dogboe (18-0, 12 KOs) claim the interim version of the WBO junior featherweight title. The hard-hitting Ghanian is now mandatory challenger for Jessie Magdaleno, who is scheduled to make his second title defense at the StubHub Center in Carson, California, on March 10.

It remains to be seen if Magdaleno-Dogboe will happen on that date but Dogboe either gets his shot soon, or he will be upgraded to full WBO titleholder.