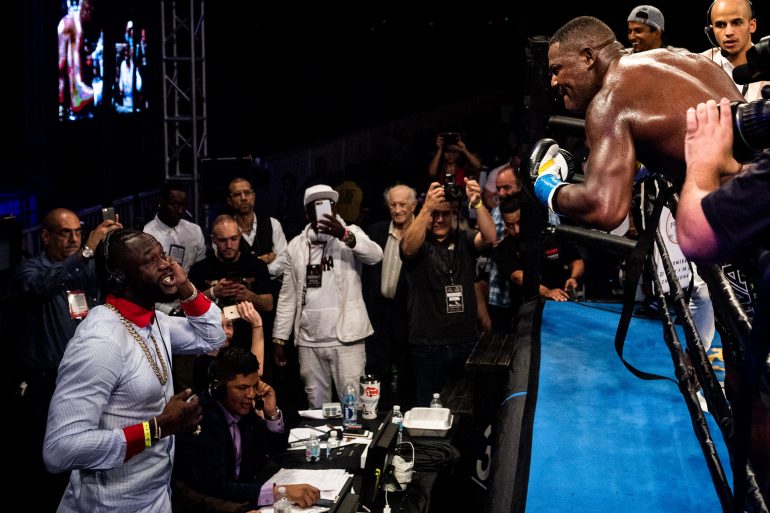 Deontay Wilder is finally going to get his hands on Luis Ortiz.

There’s an agreement in place for Wilder to defend his WBC heavyweight title against Ortiz on March 3 at Brooklyn’s Barclays Center, sources with knowledge of the talks told RingTV.com.

Showtime will televise the meeting between the big men (opposite HBO’s coverage of Sergey Kovalev-Igor Mikhalkin), who were scheduled to meet on November 4. A random performance-enhancing drug test revealed the substances chlorothiazide and hydrochlorothiazide in Ortiz’s system, scrapping the highly anticipated fight.

The WBC cleared Ortiz of wrongdoing earlier this month, attributing the adverse finding to medicine necessary to treat high blood pressure. The 38-year-old was re-inserted into the organization’s ratings, paving the way for Wilder’s toughest in-ring test to date.

Ortiz (28-0, 24 knockouts) quickly scheduled a fight with Daniel Martz on December 8, and knocked the journeyman out in two rounds. Wilder (39-0, 28 KOs) was ringside, and the fighters exchanged words in the center of the ring afterward.

“Stay by the phone, I’ve been waiting for you,” said Wilder, THE RING’s No. 2 heavyweight. “”I blessed you with the opportunity the first time, you messed it up. I’m going to bless you again.

“I understand the blood pressure pills and everything like that. … Be ready, I don’t want no excuses. I’m gonna whoop your ass.”

Ortiz, a southpaw from Cuba, can box and bang and boasts tremendous size at 6-foot-4, 240 pounds. The decorated amateur possesses a tricky jab and also knows how to work the body. In his biggest victory, THE RING’s No. 5 heavyweight stopped Bryant Jennings inside seven rounds in December 2015.

So when the fight against Wilder was signed, boxing fans were understandably anxious to see Wilder tested. After all, the Olympic bronze medalist, while a fearsome puncher, had yet to face a bona fide challenge. Wilder was set to face Alexander Povetkin in 2016, but the Russian tested positive for a banned substance. And then it was Ortiz who fell by the wayside, another worthy challenger scratched off the list for Wilder.

But now it’s going to happen, and we’ll find out if Wilder’s fundamental flaws will be exposed against a technician like Ortiz, or if power and size trumps all.

Wilder, 32, has knocked out every man who’s stepped in the ring with him, most of them in devastating fashion. Bermane Stiverne went the distance with The Bronze Bomber during their January 2015 meeting, but when Ortiz was forced to withdrew, it was Stiverne who was called on to replace him.

The rematch went far differently. Wilder dropped Stiverne three times, and then left him unconscious, his body draped over the bottom rope. It took only one round this time.

“I want to release the pain, what Stiverne took that night was meant for Luis Ortiz,” Wilder said. ” … For me, a guy like that, it was his second offense, should be out of here period. But somehow he’s back in, but we understand the situation with the heavyweight division, it’s small.”