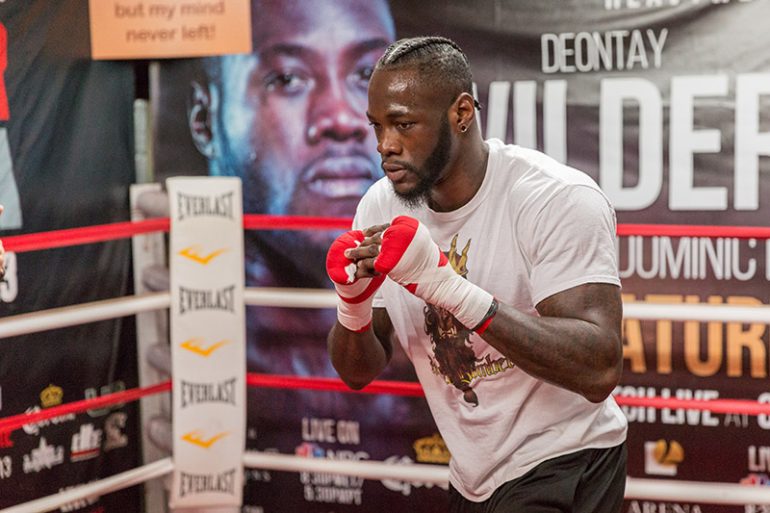 Luis Ortiz had just blasted through journeyman Daniel Martz in two rounds, and with his man still writhing on the canvas, the Cuban walked over, peered over the top rope and started jawing at Deontay Wilder.

The two were slated to meet for Wilder’s WBC heavyweight title in November, but Ortiz tested positive for banned substances, scuttling the bout.

Ortiz was reinstated by the WBC last week after the organization found he used the substances to treat high blood pressure, and the heavyweight contender returned Friday on FS1.

Wilder was there to take in the action and provided expert commentary during the short bout, and it’s apparent they’re angling to reschedule the bout for the spring.

“I’m ready for you,” Ortiz said in English to Wilder after they faced off in the ring.

The fight was highly anticipated as Wilder’s toughest test by a mile yet. And despite Ortiz’s second ban, Wilder is anxious to prove his worth, with fellow titleholder Anthony Joshua angling for a spring unification against Joseph Parker.

“Stay by the phone, I’ve been waiting for you,” Wilder said. “I blessed you with the opportunity the first time, you messed it up. I’m going to bless you again.

“I understand the blood pressure pills and everything like that. … Be ready, I don’t want no excuses. I’m gonna whoop your ass.”

Wilder instead rematched Bermane Stiverne, topping the only man who had lasted the distance with him. He took care of the Haitian in only one round, with three sickening knockdowns, the lasting impression Stiverne dangling unconscious on the bottom rope.

Now Wilder is eager to dispense of Ortiz in like fashion.

“He was the first guy ever known to fail the drug test with three different things in his body twice,” he said. “For me, a guy like that, it was his second offense, should be out of here period. But somehow he’s back in, but we understand the situation with the heavyweight division, it’s small.

” … I want to release the pain, what Stiverne took that night was meant for Luis Ortiz.”