No weight troubles for Milan Melindo this time around 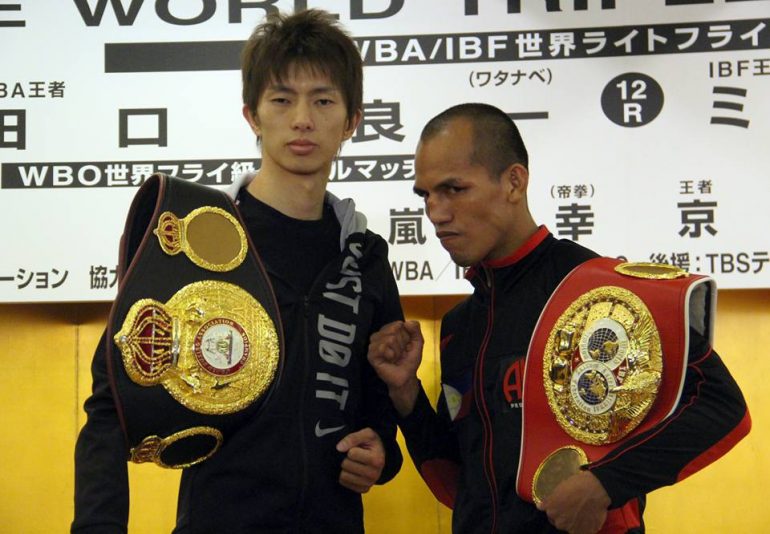 Photo by ALA Promotions
30
Dec
by Ryan Songalia

Milan Melindo had none of the drama at his weigh-in Saturday that preceded his last fight three months ago.

He weighed in comfortably under the junior flyweight limit at 107.5 pounds, a quarter-pound less than his opponent Ryoichi Taguchi did, a far cry from when he came in 1.25 pounds over on his first attempt against Hekkie Budler before returning to the scale after sitting in a sauna.

Michael Aldeguer, Melindo’s promoter, said “El Metodico” is usually “grumpy and feeling pressured about his weight,” struggling to talk or relax while waiting to get on the scale. This time around, despite concerns about the Japanese winter cold hurting his ability to sweat, he made the weight, and was in high spirits and talkative.

“It’s the easiest weight that he’s done in a while,” said Aldeguer. The reason, he believes, is that this is something the 29-year-old has wanted his whole career.

“I know ever since he was young, and when he won the title, he was talking to us about fighting for unification, and now it’s here,” said the ALA Promotions president. “I know this is something he’s been waiting for all his career, to make something big.”

If Melindo (37-2, 13 knockouts), the IBF junior flyweight titleholder from Cagayan de Oro City, Philippines, can beat Taguchi (26-2-2, 12 KOs), the WBA titleholder from Tokyo, in their unification bout on New Year’s Eve, he’ll be just the third Filipino fighter to unify the titles since the alphabet belts were first introduced. Taguchi, 31, would also be the third Japanese fighter to do the same.

At their physical exam, Melindo was measured at 5’2”, four inches shorter than Taguchi, who also has a five-centimeter reach advantage at 171 centimeters. Melindo told reporters that he wasn’t concerned about it, saying that they were going to be boxing and not playing basketball, while trainer Edito Villamor pointed to Jesus Geles, Carlos Tamara and Fahlan Sakkreerin Jr as examples of fighters of comparable height to Taguchi that Melindo has defeated.

“It’s [about having] the right strategy,” said Villamor.

The fight will be televised in Japan on TBS Television but won’t be shown live in the Philippines. Aldeguer says he had “worked on” getting the fight shown live on ABS-CBN, which televises ALA’s Pinoy Pride shows, but the fight conflicted with New Year’s Eve programming.

Following the weigh-in, Villamor has focused on loading Melindo up on carbs (“Rice, spaghetti with chicken and fish”), and says he’ll go through his usual fight day routine involving prayer and contemplation.

Should Melindo win his fight, he may not be done trying to unify titles. WBC titleholder Ken Shiro, who stopped Gilberto Pedroza in Yokohama, Japan Saturday night to retain his belt, has called for the winner of Sunday’s fight, and Aldeguer says Melindo is game.

“They’ve spoken about that, they’ve approached us and they talked about that. But it’s still very premature to discuss it. If Milan wins tomorrow, then that’s the direction he wants. But first, all the focus is on tomorrow,” said Aldeguer.