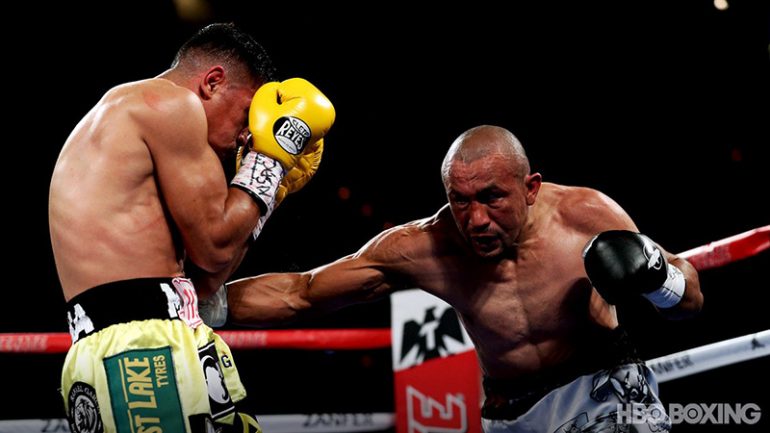 Salido cracks Roman to the body during their slugfest. Photo / @HBOboxing
14
Dec
by Mike Coppinger

Orlando Salido’s defeat to Mickey Roman on Saturday won’t be the final fight of his career after all.

The Mexican brawler announced his retirement immediately after he was stopped in the ninth round of a hellacious bout, but Salido has since reversed course.

Now, he says he’s ready to resume his career after he “let my feelings and frustrations make me say things I did not think about.”

“It was a tough and difficult fight in which I could not do the things that I needed to do in the ring, which I attributed to my age and the many wars I’ve had in my career,” said Salido (44-14-4, 31 knockouts).

“But when I returned home and after thoroughly examining my preparation and the fight, I realized that the weight was also part of the problem last Saturday. I arrived at the camp weighing a lot, the highest of my career and losing weight became the focus of training and preparing me for the fight was secondary.

I feel like I left the fight on the scale. It is not an excuse but having one fight in 18 months did not help me to stay in condition for what was an extremely strong preparation but in which the weight became the obstacle to overcome.”

Salido, a 130-pound contender and two-division titleholder, hasn’t scored a notable victory since he placed the only blemish on the ledger of Vasyl Lomachenko in 2014.

And after so many grueling fights, and at 37 years of age, he appears well past his best days. He’s determined to press on with his career, though it’s unclear just what kind of fights he’ll be able to secure at this juncture.

“While I was happy with the fight that I offered to the public on Saturday I know that I can still make things better and that’s why I’m going to keep my options open in 2018,” Salido said, “and if something good comes out at 130 or 135 pounds I would seriously think about going back to fight.

“Sometimes at the end of a fight and in the heat of the moment things are said, but when you take the time to reflect you realize that should not have said them. I want to return to the ring and give my fans more shows and I think I still have something good to offer boxing.”