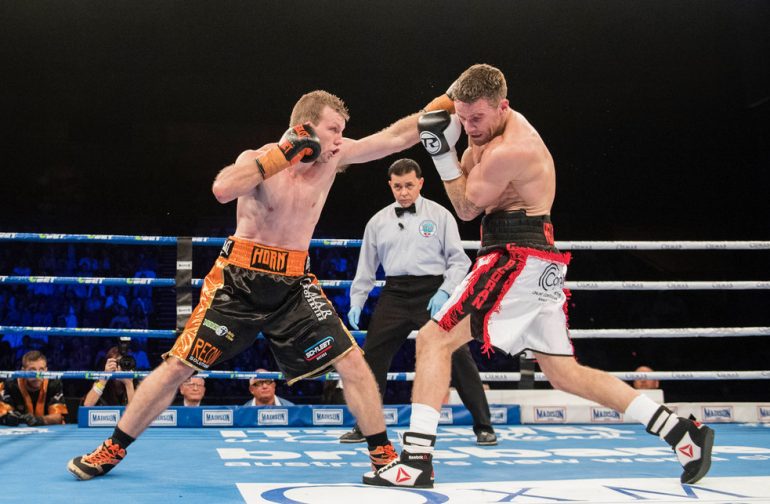 It wasn’t always pretty but Jeff Horn got the job done in his first title defense.

Horn (18-0-1, 12 knockouts) retained the WBO welterweight title with an 11th-round technical knockout of Gary Corcoran on Wednesday at the Convention & Exhibition Centre in Horn’s hometown of Brisbane, Australia.

Corcoran’s corner signaled to referee Benjy Esteves Jr. that their fighter had had enough, with his left eye a bloodied mess from Horn’s targeted rights, bringing a halt to the fight at the 1:35 mark.

Horn, who had entered the fight with a cut over his left eye sustained in sparring, also spilled some of his own blood in the fight, as the two clashed heads repeatedly. In some instances it was intentional, like in the tenth when a faded Corcoran (17-2, 7 KOs) bounced off the ropes in response to a flurry from Horn and came up with his head.

It was Horn’s superior punching power, foot and hand speed, and ability to get work done from distance which were the primary edges for the 2012 Olympian, who was fighting for the first time since his upset decision win over Manny Pacquiao in July to win the belt.

“I love bringing these tough fights to Brisbane, and it was a success,” said Horn, 29. “I’d love to have an easy fight every once in awhile, but it doesn’t seem like that’s going to happen again.

“I wasn’t the underdog for a change and I was coming in the champion and it was a good feeling. The timing was off at the start of the fight, I couldn’t really get that range very well, but as as soon as I stated to work the jab and going first, I managed to break him down quite easily after that.”

All three judges had Horn well ahead at the time of stoppage, with two giving Corcoran just one round at 99-91, and the third having it a 100-90 shutout.

Horn’s schedule doesn’t get any easier from this point as he’s due for a mandatory title defense against Top Rank stablemate and former lightweight titleholder and undisputed junior welterweight champion Terence Crawford. Bob Arum, who promotes both fighters, reiterated afterward that the fight will take place in April in Las Vegas.

* In the non-televised co-feature, Nathaniel May (19-1, 11 KOs) dropped previously unbeaten Brazilian Aelio Mesquita (16-1, 14 KOs) twice in the fourth and once more in the fifth – all on body shots – before the fight was waved off 16 seconds into the fifth. May, 22, of Bunbury, Western Australia is rated no. 7 by the IBF at 126 pounds and hasn’t lost since dropping a decision in his fifth bout.