Vasyl Lomachenko: It didn’t surprise me that Rigondeaux quit 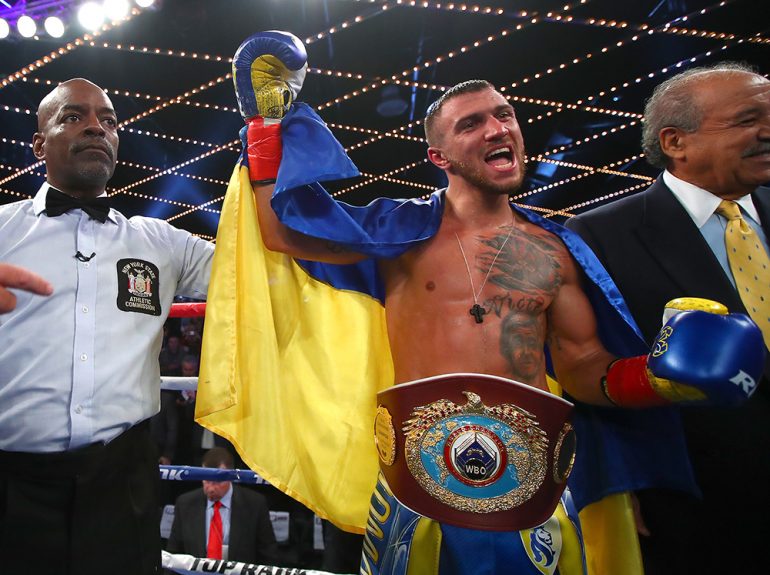 Vasyl Lomachenko could have come to ringside and chatted with media somewhat informally, but the pound-for-pound ace wanted something a bit more structured, so the PR folks moved press at the MSG Theater to a section of seating, and had some stools set up so Team Loma could take queries after his easy-peasy takeout of Guillermo Rigondeaux Saturday evening in NYC.

Seems clear that the 29 year old is getting more and more comfortable in his role…which is that of the best boxer on the planet.

OK, OK, this isn’t provable, that he is THE BEST…but the way some folks talk about him suggests he kinda sorta has to be THE MAN.

The 10-1 boxer dispatched Rigondeaux with absurd ease, so much that the Cuban didn’t land more than three punches in any single round during the six rounds he completed. Now, not everyone of the 5,300 or so in the building was giddy after, because, frankly, many felt like Rigo quit, gave up, didn’t give his best effort to win. He hurt his hand, he said, and he and the trainer, Pedro Diaz, decided to end it early.

Loma himself was asked about that, and he clearly wasn’t keen to go the polite route, and let the Cuban off the hook. “No, it didn’t surprise me (that Rigo quit),” he said in his native tongue, though he mostly spoke English during the press briefing. “I was waiting for him to do something more,” he said, as told by manager Egis Klimas, who could well win BWAA manager of the year, what with Loma’s ascent cementing and Kovalev getting back on the winning track. “And during the press conference (on Thursday), I had said I wouldn’t be surprised if he said ‘no mas.’’’

Bottom line, did he think the left hand injury explanation was righteous? “I fight with one hand in Macao…it depends on you. If you want to win, want to fight, you need (to be willing to) die in that ring.”

Rigo talked mad trash, much of it on Twitter…and then quit…thoughts? “Where’s Rigo,” he said, need to ask him. At the hospital, came the response….

When, I asked, did Loma know that he’d have his way with Rigo…right away?

Did he know it could maybe go like this? “He’s a good fighter, he’s a strong fighter, but it’s not his weight, not his size.”

And is he breaking guys mentally, or physically? “Both…both,” Loma said. “I feel after the third round, I say, ‘You’re mine, you’re mine.’” He knew after one round that it wouldn’t go the distance, he shared.

Is he fighter of the year? Nah, he said, “not three big wins…It’s not big for me,” he said of the Rigo conquest, because Rigo was coming up so much in weight.

And was he frustrated by Rigo’s holding? He said he prepared for that, he knew the Cuban would. “It’s not wrestling, it’s boxing,” he said.

Talking about 135..Bob Arum said that Mikey Garcia and Jorge Linares would be easy work for Loma. Does the fighter agree? No, he said; moving to 135 will be like Rigo going from 122 to 130. (I think he’s not giving himself enough credit.)

As for next, Salido is off the list, being that he lost Saturday. Name one guy! “Maybe Mikey Garcia,” Loma said, after some pondering. Does he think Garcia would be a stern test? He treats every foes if they will be a stern test, he said, basically telling us that he doesn’t get cocky, and trains his tail off for any fight. No, he didn’t go out of his way to laud Mikey’s skills.

Gary Russell again? It’s hard, because of promotional differences…and he also said he thinks Russell doesn’t love fighting that much.

So, 135 next? “It depends on Bob Arum,” he said. “My weight is 138,” he stated. He said he’s open to stay at 130, or go to 135. Miguel Berchelt, a title holder at 130, holding the WBC strap, is a logical next for Loma, said Top Rank exec Carl Moretti. Moretti basically said no one at 130 is likely to really test Loma, but unifying is decent idea. “There’s no challenges in the sport for him right now,” Moretti said, and that bears repeating, and underlining. He also said Alberto Machado, the WBA champ, isn’t very marketable, so that one doesn’t make sense.

My three cents: Loma’s English is getting better and this will help spread the word on him to the casuals. A nasty KO of Rigo, tailor made for SportsCenter, would have helped, as well, but the crafty Cuban wasn’t going to go out like that. On that point, it was interesting in that a media member asked Dino Duva of Roc Nation for proof of Rigo’s injury, implying that he doesn’t trust the explanation that a left hand injury from round three made him unable to continue. Some of that mistrust could be, I think, also run-off from the Roc Nation/Daniel Franco situation, as public opinion is seemingly almost wholly on the Franco side. I haven’t heard many, if any, folks who understand why Roc Nation isn’t standing behind the injured fighter, and why Jay Z, a billionaire, isn’t offering to help with medical bills. Roc Nation boxing boss Michael Yormark didn’t attend this fight, leaving Duva to be the answer man. Since Rigo went to the hospital, no Roc Nation rep was at the post-fight presser, the official one. Duva did stand and take questions from press at ringside, twenty minutes after the main event ended. He wasn’t asked about the Franco situation, though. My guess is that it is on the minds of everyone over there, every day. That’s my guess, though, none are keen to go on the record and talk about their side of this.