Rodrigo Guerrero continues his path back to a world title 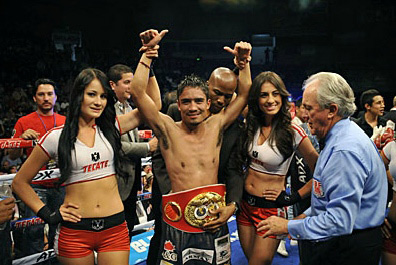 Bantamweight contender Rodrigo Guerrero knows what it is like to win a world title. That hunger is still there and he is hoping to cash in on another opportunity to fight for a belt.

Guerrero will square off against Salvador Juarez tonight at the Palenque de la Feria del Caballo in Texcoco, Mexico. The fight will air live on Televisa throughout Mexico.

The fight will be a clash between fighters who reside in the Mexico City area.

Guerrero (25-6-2, 16 knockouts) has not fought since Apr. 15, when he fought to a second round technical draw against Michael Ruiz, Jr. The fight was stopped due to a cut over Guerrero’s eye from an accidental clash of heads.

Guerrero’s most recent significant bout occurred on Apr. 16 of last year, when he lost a 12 round unanimous decision to Stuart Hall. The fight snapped a five-bout winning streak.

Guerrero is ranked number five by the IBF.

Juarez (11-4-2, 3 KOs) defeated Manuel Lara in his last bout on Sept. 2. Seven of Juarez’s bouts have been decided by split decision, with Juarez winning four of them.

In the co-feature of the Promociones del Pueblo card, junior lightweight contender Eduardo Hernandez will face Rafael Hernandez in a 10 round bout.

Eduardo Hernandez (24-0-3, 20 KOs), who resides in Mexico City, knocked out Raul Centeno in his last bout on Sept. 2. The knockout over Centeno was Hernandez’s 17th consecutive knockout victory.

Hernandez, who turned 20 on Nov. 21, is ranked number six by the WBC. His most significant victory occurred on Oct. 22 of last year, when he knocked out former world junior featherweight titleholder Victor Terrazas.

Rafael Hernandez (22-8-2, 17 KOs) is 3-3 in his last six fights. The Caracas, Venezuela resident fought to a 10 round unanimous decision loss to former junior bantamweight titleholder on July 29.