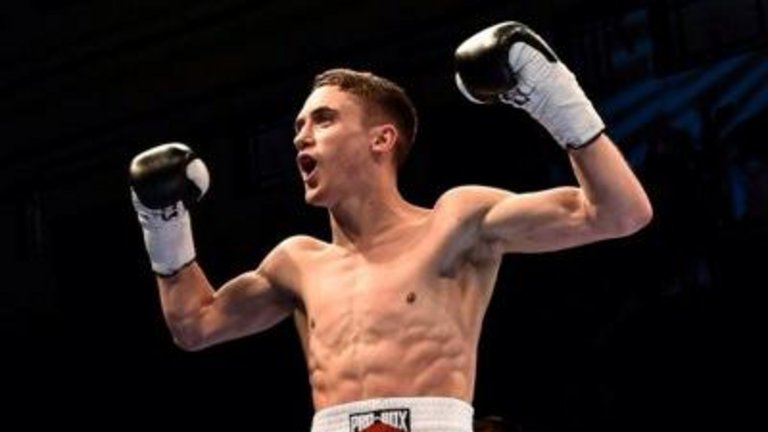 During the embryonic stages of a professional career, there is nothing more exciting than a fighter having the ability to turn out the lights.

Unbeaten British featherweight Reece Bellotti, from Watford, England, is a two-weight ABA champion who already possesses the required blend of skills and finesse. However, Bellotti (10-0, 9 knockouts) can also turn his punches over and remove opponents from their senses in a hurry.

His rapid ascent is particularly surprising when one considers that Bellotti only took up boxing to get fit. The youngster had to be coaxed into fighting by a trainer at the South Oxhey Boxing Club. He had his first fight at 17 years old and never looked back.

Now promoted by Matchroom Boxing, Bellotti will be showcased this Friday on the Sky Sports NXTGEN series in the U.K. when he faces Jason Cunningham (23-3, 6 KOs) for the Commonwealth featherweight title in London. It’s his first championship fight and his first 12-round contest, but the 26-year-old boxer-puncher is completely unfazed.

“My fitness has always been an asset, through the amateurs and through the pros,” Bellotti said in an interview with RingTV.com. “Everyone knows (trainer) Jim (McDonnell’s) style of training. All his boys are really fit and that suits me down to the ground.

“I carry a bit of power which attracts fans because every boxing fans likes to see a knockout. If they come to watch me, they’re more likely to see one. I can get carried away sometimes, so Jim likes to work on my boxing skills more than my fighting ability. Every now and again, Jim will remind me in the corner that I won the ABAs and that I should use my skills.” 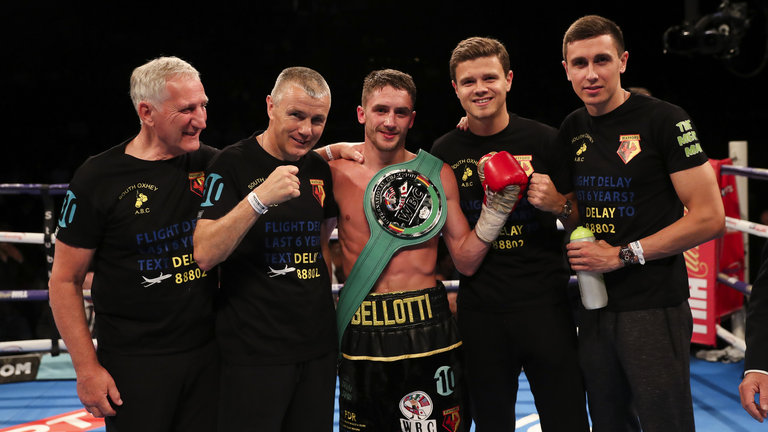 Bellotti (center) with McDonnell to his right. Photo courtesy of Sky Sports

Jim McDonnell is a former European featherweight champion who twice challenged for world honors. In 1988, he dropped a 12-round unanimous decision to the superb WBA junior lightweight titleholder Brian Mitchell and, almost one year later to the day, McDonnell was stopped in 12 by the great Azumah Nelson, who held the WBC belt.

A huge lover of the game, McDonnell was determined to give back and the affable Londoner has had major success as a coach. He currently trains James DeGale, who is THE RING’s No. 1-rated super middleweight and the IBF titleholder.

“Reece is an outstanding boxer and he’s knocked out almost everyone he’s fought,” said McDonnell, his excitement palpable. “Anyone he’s sparred with – anyone, at any weight – says he can punch. He’s got serious power and anyone he hits with little gloves on, as you’ll see in this Commonwealth title fight, there will be a reaction.

“The problem with Reece is the same problem you had with myself when I was fighting; you have to hold him back. Right now, he’s on a taper, but he still wants to work hard. He’s very dedicated and anything you ask him to do, he’ll do it and then some. He’s got no problems on that score and is totally focused on the sport.”

The process of building a fighter properly is an art and there are a variety of potential pitfalls. Among them is moving too quickly. Bellotti has only had 46 professional rounds and he is going up against a fighter with 168. Cunningham, in fact, was challenging for domestic titles before Bellotti entered the paid ranks.

“I was hoping to be at this stage by now,” responded Bellotti confidently. “I don’t think it’s that quick, although from the outside it may seem so. I believe that the more time I get in the ring, the better I get.

“It’s up to Jim to tell me what I need to improve on. A fighter always has that self-confidence where they think they’re the best. I need to gain experience and the only way you do that is by fighting. I also need to work on my footwork. My footwork has improved massively since I’ve been with Jim.”

McDonnell has serious belief in Bellotti. That was visceral within seconds of speaking to him. However, McDonnell also knows what athletic qualities are required to make a top-flight professional. If foot movement was going to be an issue in the future, then that’s the area which required urgent attention.

“I was told by someone at his old amateur club that if Reece had one weakness it was his feet and balance,” acknowledged McDonnell. “I looked at it, didn’t say nothing and just started putting him through these drills that James DeGale does. James has the best feet I’ve seen in boxing – ever – and that’s down to him doing ballet dancing as a kid.

“With Reece, when I first watched him do it, you could see the difference. James was a natural and Reece was a work in progress. But Reece is a very quick learner. Now I put him through these drills against the clock and he’s smashed his old numbers in half. His feet, now, are a major asset because he’s worked on them so much.”

On Friday, Bellotti and McDonnell will be braced for the biggest night of their journey so far. A Commonwealth title is a superb springboard to bigger things and the featherweight division is red-hot, both domestically and globally.

McDonnell acknowledges Cunningham’s qualities, but he foresees another inside the distance victory for Bellotti.

“I’ve been studying Cunningham a lot and he’s a talented fighter,” said the 57-year-old trainer. “He’s not Commonwealth champion for nothing. He’s a southpaw, a smart operator and he sets traps. The thing is, the traps he sets is what’s going to get him knocked out. He’s going to walk onto something because he won’t have seen anything like Reece before.

“I’ve been doing some technical sparring with Reece, in the southpaw stance, and you can’t buy some of the moves he’s making. For every action Cunningham makes, there’s going to be a reaction. He’s going to be surprised at the strength, the power, the boxing ability and the fitness. He’ll never have boxed anyone like Reece Bellotti.”

There was an ironic contrast in personalities between fighter and trainer. McDonnell is an excited and outgoing personality, although that doesn’t detract from the amazing technical knowledge he possesses. Bellotti was very laid back, but he’s the one who must generate excitement every time the bell rings.

With Bellotti, there were no outlandish proclamations and, if anything, he was trying hard not to say the wrong thing. He kept his immediate goals realistic, but there was also an undercurrent of true sporting ambition in his voice.

“I’ve always said, since I got into the professional ranks, that I want to win the British title,” said Bellotti. “I’m in the featherweight division and there are some great fights out there. I just like winning belts and the British title has always been my aim. But if (promoter) Eddie (Hearn) can make fights for international or European titles, then I’d gladly compete for one of those.

“I want to be remembered as a good fighter and not necessarily one who won loads of world titles. When I got into boxing, I wanted to be involved in something like the first fight between (Diego) Corrales and (Jose Luis) Castillo. That was a great fight and I’ll never forget it. You don’t remember that fight because those guys were world champions. You remember it because it was a great fight.”

We’ll get a barometer of Bellotti’s true talents on Friday.

You can subscribe to the print and digital editions of THE RING Magazine by clicking the banner or here. You can also order the current issue, which is on newsstands, or back issues from our subscribe page. On the cover this month: Mikey Garcia