GGG proved his greatness in spite of draw with Canelo: Weekend Review 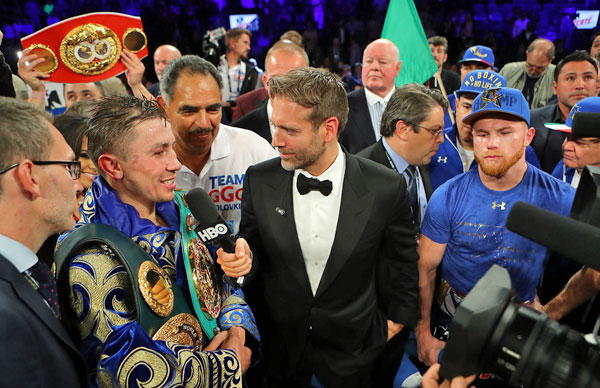 LAS VEGAS – The toxic 118-110 card turned in by Adalaide Byrd became the story of the Canelo-GGG fight, which is a shame.

Canelo Alvarez (49-1-2, 34 knockouts) and Gennady Golovkin (37-0-1, 33 KOs) delivered the thrilling, give-and-take middleweight championship fight everyone was hoping to see Saturday at a pulsating T-Mobile Arena. That shouldn’t be overshadowed entirely by the controversy of Byrd’s scoring and an overall decision – split draw – that incensed those who believe Golovkin should’ve received the nod.

Here are the biggest winners and losers on Saturday.

Gennady Golovkin: GGG and his team were devastated after he fought to a draw with Canelo Alvarez, convinced they’d been cheated out of a victory they had envisioned for so long. The pain is understandable.

He kept his sanctioning-body titles, for whatever that’s worth. Perhaps more important, he validated his entire career. GGG stepped into the ring on Saturday without a defining fight in 11 years as a professoinal. He had exactly one victory over a top-tier opponent, if that’s what Daniel Jacobs is, and he struggled to claim it.

Against Canelo, a legitimate A-list foe, Golovkin proved that the glowing accolades bestowed upon him over the past decade-plus were true. He didn’t beat Canelo but, in the eyes of most of those who watched the fight, he gave a splendid performance and deserved the victory. At the very least, he fought on even terms with one of the best fighters in the world.

Golovkin fought with his typical ferocity, stalking his strong, young opponent all night, jabbing effectively, consistently landing hard punches to the head and taking everything Canelo delivered without blinking. It was a complete performance, save for a knockout.

In other words, if a draw can be a defining fight, that was it.

And hopefully GGG will get another opportunity to right what he believes is a wrong by having his hand raised against Canelo next Cinco de Mayo weekend, when the Mexican is expected to fight next.

Fingers crossed that will happen – for GGG, for Canelo and for fans who want to see the next chapter in this story.

Canelo Alvarez: Even those who thought Golovkin should’ve been awarded the victory have to acknowledge that Canelo gave a spirited, credible performance.

Over the past two years, he was accused by many of ducking GGG. He put that to rest. Many people (including me) thought Golovkin, too good and too strong for him, would knock him out. He withstood everything thrown in his direction, including many shots to the head that would’ve stopped a less durable fighter. And, most important, he landed punches at a rate comparable to Golovkin.

Some criticized him for what they perceived to be running, which I don’t think is fair. Yes, he backpedaled in parts of the fight but he never stopped throwing – and landing – punches, which is the object of the game.

One must acknowledge the vicious shots to Golovkin’s body, which I believe were the most effective punches of the fight. They might’ve worn GGG down and helped Canelo rally in the final rounds, which is when he turned a one-sided fight into a close one on the two legitimate scorecards.

As a result of all that, he emerged with a draw that allowed him to keep his RING middleweight championship.

The one thing that has me scratching my head is my perception that Canelo got unusually tired in the middle rounds – particularly seven, eight and nine – before somehow rallying in the championship rounds.

Maybe it was his conditioning, which is difficult to believe given his work ethic. Maybe his added bulk impacted his stamina. Maybe his tactic of moving the entire fight – which was unusual for him – took a toll. Maybe having a beast like GGG in your face simply wears you down. And maybe he took rounds off to preserve his energy for the stretch run.

I can’t be sure of any of the above. I do believe this, though: Whatever the problem was, it will have to be addressed before a rematch if he is going to have a chance to win.

Scoring is subjective. Capable judges can see – and score – the same fight in a variety of ways. The problem in this case is that virtually everyone believes the fight was close or GGG won a clear decision, which renders Byrd’s scoring ludicrous.

According to her, Golovkin won only two of the 12 rounds. That absolutely does not reflect what happened in the ring, which is why her scorecard triggered such rage among media members and on social media.

How does such a thing happen? Corruption? Incompetence? A little of both? Nevada State Athletic Commission Executive Director Bob Bennett, who acknowledged Byrd’s “off night,” said he and his colleagues will try to determine what went wrong and address it. As well as he should. Byrd’s card gave boxing one more black eye on a night that should’ve been a boon to the sport.

Bennett has more patience than a lot of other people who are calling for Byrd’s head immediately. Many of them want her to be fired, no questions asked.

That isn’t likely to happen. Bennett, who actually commended her ability, suggested she might not work big fights for a while to give her time to hone her skills. I like the idea of Abel Sanchez, GGG’s trainer, better: Send her back to judging school. She needs to start over.

The final result: The majority of those who watched Canelo-GGG feel that Golovkin deserved the decision, generally somewhere between 115-113 (seven rounds to five) and 116-112 (eight rounds to four).

Members of the media leaned in the direction, although a number of them scored it a draw and some had Canelo winning a close decision. I scored it 115-113 for Canelo, which I know puts me in the minority, but I believe any score between 115-113 either way was acceptable. That means I don’t believe the draw was an injustice to either fighter. That’s how most at ringside felt afterward.

I acknowledge that Golovkin took the fight to Canelo, apparently one reason so many favored GGG, but I thought that notion was taken too far. It doesn’t matter what direction you’re going – forward, backward or sideways – if you land punches. And Canelo landed a lot of punches.

Overall, I thought the fighters landed about an equal number of power shots to the head but I gave more weight to Canelo’s body shots than GGG’s jabs.

I could see giving Golovkin seven rounds – several rounds could’ve gone either way, after all – but no more than that. A score of 116-112 in his favor isn’t remotely akin to Byrd’s absurd tally for Canelo but it doesn’t feel right to me.

At any rate, I believe it was a close, competitive fight that could’ve gone to either fighter.

Once again the I’m-right-and-you’re-an-idiot brigade are out in force. I’m referring to those who know without doubt that Golovkin was the victim of Highway 15 robbery and won’t even entertain the notion that an opposing opinion might have some validity.

I’ll just tell you what I experienced at ringside, mere feet from where the fight took place. Those around me – experienced, unbiased boxing scribes — had scores ranging from 116-112 for Golovkin to 115-113 for Canelo. And not a single one of them said he or she had a problem with a draw – not one. That should tell you something.

I acknowledge that I didn’t talk to everyone on press row but I got a good sample of opinions from people for whom I have tremendous respect. And we all agreed the fight was close. …

The Canelo-GGG undercard produced two good performances. Diego De La Hoya (20-0, 9 KOs) easily outpointed Randy Caballero (24-1, 14 KOs) in a 10-round junior featherweight fight, demonstrating again the he has the goods. He doesn’t have much puncher power but he is a quick-handed, outstanding boxer.

And Jo Jo Diaz (25-0, 13 KOs) nearly shut out late replacement Rafael Rivera (25-1-2, 16 KOs) in a 10-round WBC featherweight title eliminator, boxing as beautifully as ever. The problem is he is now the mandatory to fight WBC beltholder Gary Russell Jr. I think Diaz is a very good all-around fighter but Russell, perhaps the quickest boxer in the world, would be a tall order for him. …

Meanwhile, lightweight contender Ryan Martin (20-0, 14 KOs) struggled to defeat tough Francisco Rojo (20-3, 13 KOs) by a split decision in a 10-round bout in the Canelo-GGG pay-per-view opener. The former amateur star showed some grit by eking out the victory but he has a lot more to learn before he’s a threat to the top 135-pounders. …

Canelo and Golovkin weren’t the only middleweight titleholders in action on Saturday. WBO beltholder Billy Joe Saunders (25-0, 12 KOs) had no serious problems with Willie Monroe Jr., winning a unanimous decision in England to retain his title and position himself for a possible shot at Canelo or GGG.

Just as important, Saunders’ 8-year-old son, Stevie, apologized to Monroe for punching him in the private parts at the weigh-in on Friday. …

Callum Smith (23-0, 17 KOs) gave a solid performance in defeating capable Erik Skoglund (26-1, 12 KOs) by a unanimous decision in a first-round World Boxing Super Series super middleweight fight Saturday in Liverpool, Smith’s hometown. Smith, who put Skoglund down in the 11th round, is one of the favorites in the tournament.