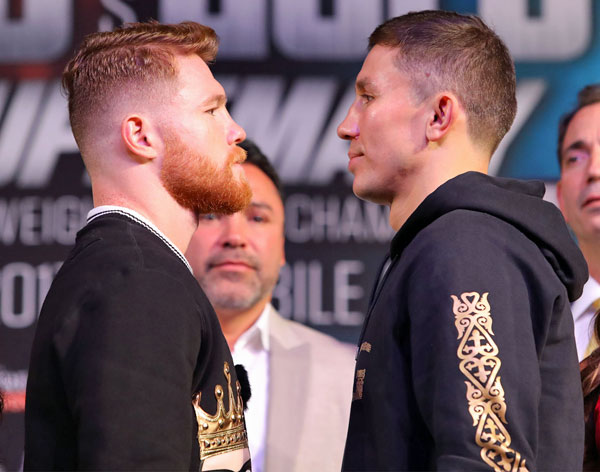 LAS VEGAS – The last superfight (real fight, not Floyd Mayweather-Conor McGregor) turned out to be a dud. I don’t see how that can happen in this one.

Canelo Alvarez vs. Gennady Golovkin is a near-perfect blend of timing and styles, which has raised hopes that the middleweight championship fight Saturday at T-Mobile Arena could be a modern classic.

Floyd Mayweather vs. Manny Pacquiao, the last superfight, pitted the two biggest stars in the sport against one another but it happened too late. Pacquiao had lost the step he needed to compete with Mayweather, which resulted in a one-sided snoozer.

This fight? Canelo, 27, is in his physical prime. And while Golovkin is 35 he seems to have very little wear and tear on his body.

Perhaps more important, prevailing wisdom is that Canelo is ready for the challenge. That might’ve not have been the case when talk of the matchup first surfaced after Canelo outpointed Miguel Cotto to win the RING and lineal middleweight championship in November 2015.

Golovkin would’ve been a prohibitive favorite had the fight taken place the following May. At the time, Canelo had never fought above 155 and was still evolving as a boxer. And GGG was in the midst of a knockout streak that would reach 23. He seemed inhuman.

A lot has changed since then.

Canelo (49-1-1, 34 knockouts) seems to have continued his development, particularly on defense. He learned a great deal against talented opponents such as Erislandy Lara, Cotto and Mayweather and has continued to develop against overmatched foes such Amir Khan, Liam Smith and Julio Cesar Chavez Jr. since the Cotto fight. He is universally regarded as a fine boxer.

The only loss of his career came against Mayweather, who easily won a decision, but, Canelo said, “I learned a lot from that fight. I don’t take it today as defeat; I take it as experience.”

Also, Canelo allowed his body more time to mature in the face of criticism. He responded to the notion that he was ducking Golovkin by saying he wasn’t yet a full-fledged middleweight, the implication being he’d fight GGG when he was ready.

He was able to make what became a typical catchweight of 155 pounds for him, but just barely. The catchweight for the Chavez fight was 164.5 pounds, which made Canelo’s life a lot easier.

“Canelo has always been a big, strong junior middleweight,” said Eric Gomez, president of Golden Boy Promotions. “He had to really sacrifice, really watch his diet. A lot of times when fighters move up in weight they get the advantage of their muscles feeling fresher and stronger. Sometimes they are stronger.

“… People don’t understand the strain it puts on a fighter when they have to shrink themselves, because they’re really shrinking muscle.”

One fight has changed the perception of Golovkin, whom many now see as the underdog on Saturday. I conducted an informal poll of elite boxing writers the past few days in Las Vegas and the majority of them picked Canelo to win.

Golovkin (37-0, 33 KOs) was able to get past Daniel Jacobs in March but the fight had no resemblance to the previous 36 of his career. Jacobs was able to land consistently and, while he went down in the fourth round, he was never seriously hurt and finished the fight on his feet.

“If Jacobs would’ve fought Canelo that night and we fought Chavez, I think you know the outcome of both those fights,” he said.

Whichever theory is closest to reality, the perception among most observers is that this is now a 50-50 fight.

“I’m extremely happy about that,” said Sanchez, referring the increasing number of those leaning toward Canelo. “That’s what our sport needs, two sides, not a fight where there’s no interest because it’s one-sided.

“I’m happy people are picking Canelo. Those same people will be rooting for whomever is doing best (in the fight). The fans are just going to see a good fight.”

One reason Mayweather-Pacquiao fell flat was Mayweather’s ability. No one doubts his ability but many of his fights were dull because, in general, he carefully outboxed his opponents without taking risks.

That’s what happened in the Pacquiao fight. Mayweather did enough to win a decision but that’s it.

“I think with Floyd, and unfortunately some other guys with that style, a lot of fans went away from the sport,” Sanchez said.

Neither Canelo nor Golovkin are cautious boxers.

Canelo is a counterpuncher in terms of his style, meaning he typically reacts to what his opponent does, but he’ll take the fight to his foe if he has to. His goal is to wreak havoc one way or another, not win boring decisions.

And Golovkin, mild-mannered outside the ring and nasty in it, is a hard-punching hunter whose nature is to destroy his opponents. That’s why he stopped 23 in a row. And that’s why many fans love him.

Those styles and mentalities – combined with where the fighters are in their careers – have many fans looking forward to Saturday.

Said Canelo: “Those are the ingredients to be one of the best fights ever.”